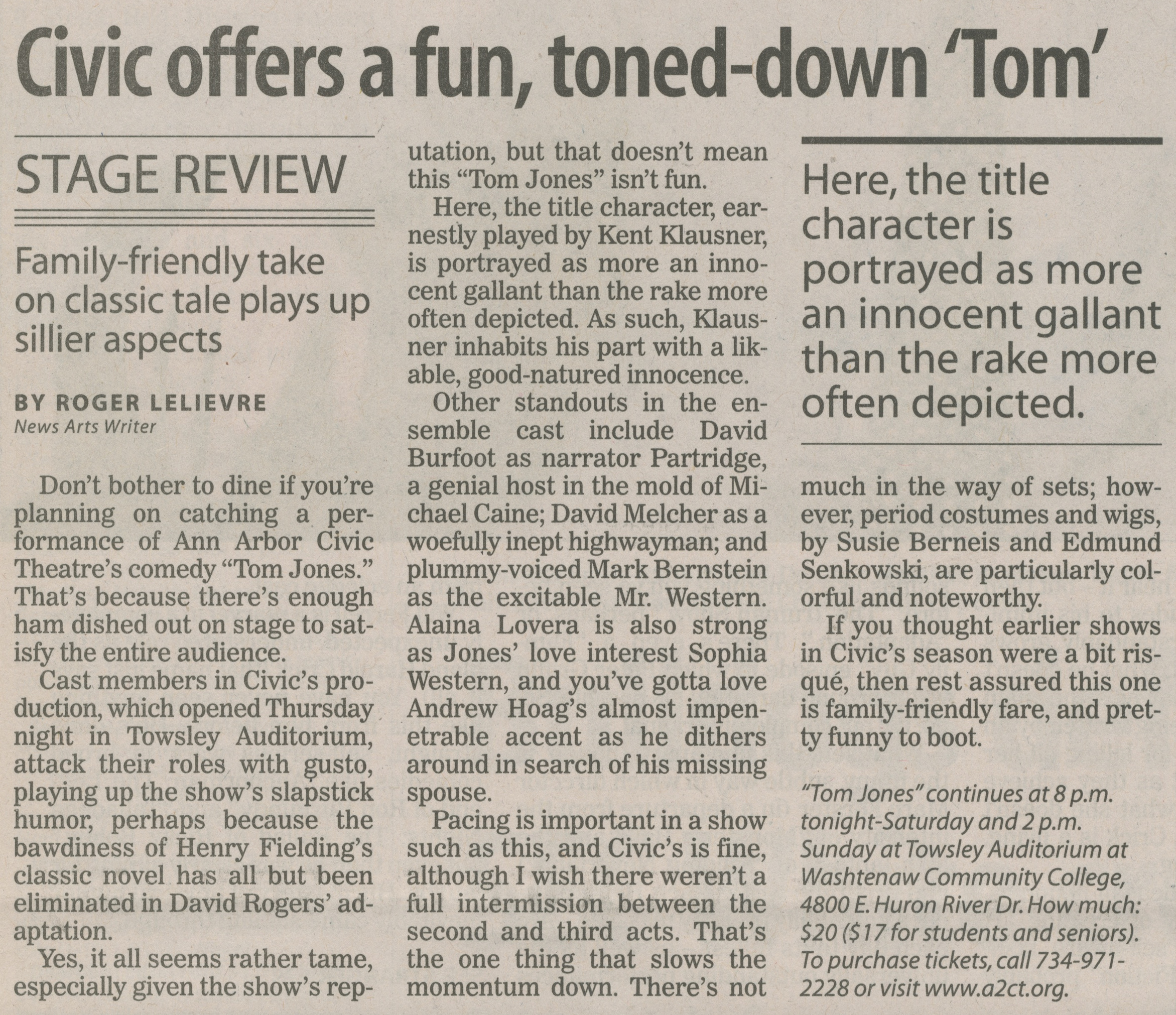 Don’t bother to dine if you’re planning on catching a performance of Ann Arbor Civic Theatre’s comedy “Tom Jones.” That’s because there’s enough ham dished out on stage to satisfy the entire audience.

Cast members in Civic’s production, which opened Thursday night in Towsley Auditorium, attack their roles with gusto, playing up the show’s slapstick humor, perhaps because the bawdiness of Henry Fielding’s classic novel has all but been eliminated in David Rogers’ adaptation.

Yes, it all seems rather tame, especially given the show’s reputation, but that doesn’t mean this “Tom Jones” isn’t fun.

Here, the title character, earnestly played by Kent Klausner, is portrayed as more an innocent gallant than the rake more often depicted. As such, Klausner inhabits his part with a likable, good-natured innocence.

Other standouts in the ensemble cast include David Burfoot as narrator Partridge, a genial host in the mold of Michael Caine; David Melcher as a woefully inept highwayman; and plummy-voiced Mark Bernstein as the excitable Mr. Western.

Alaina Lovera is also strong as Jones’ love interest Sophia Western, and you’ve gotta love Andrew Hoag’s almost impenetrable accent as he dithers around in search of his missing spouse.

Pacing is important in a show such as this, and Civic’s is fine, although I wish there weren’t a full intermission between the second and third acts. That’s the one thing that slows the momentum down.

There’s not much in the way of sets; however, period costumes and wigs, by Susie Berneis and Edmund Senkowski, are particularly colorful and noteworthy.

If you thought earlier shows in Civic’s season were a bit risque, then rest assured this one is family-friendly fare, and pretty funny to boot.

"Tom Jones"continues at 8 p.m. tonight-Saturday and 2 p.m. Sunday at Towsley Auditorium at Washtenaw Community College, 4800 E. Huron River Dr. How much: $20 ($17 for students and seniors).