Greek Revival heritage will be revived 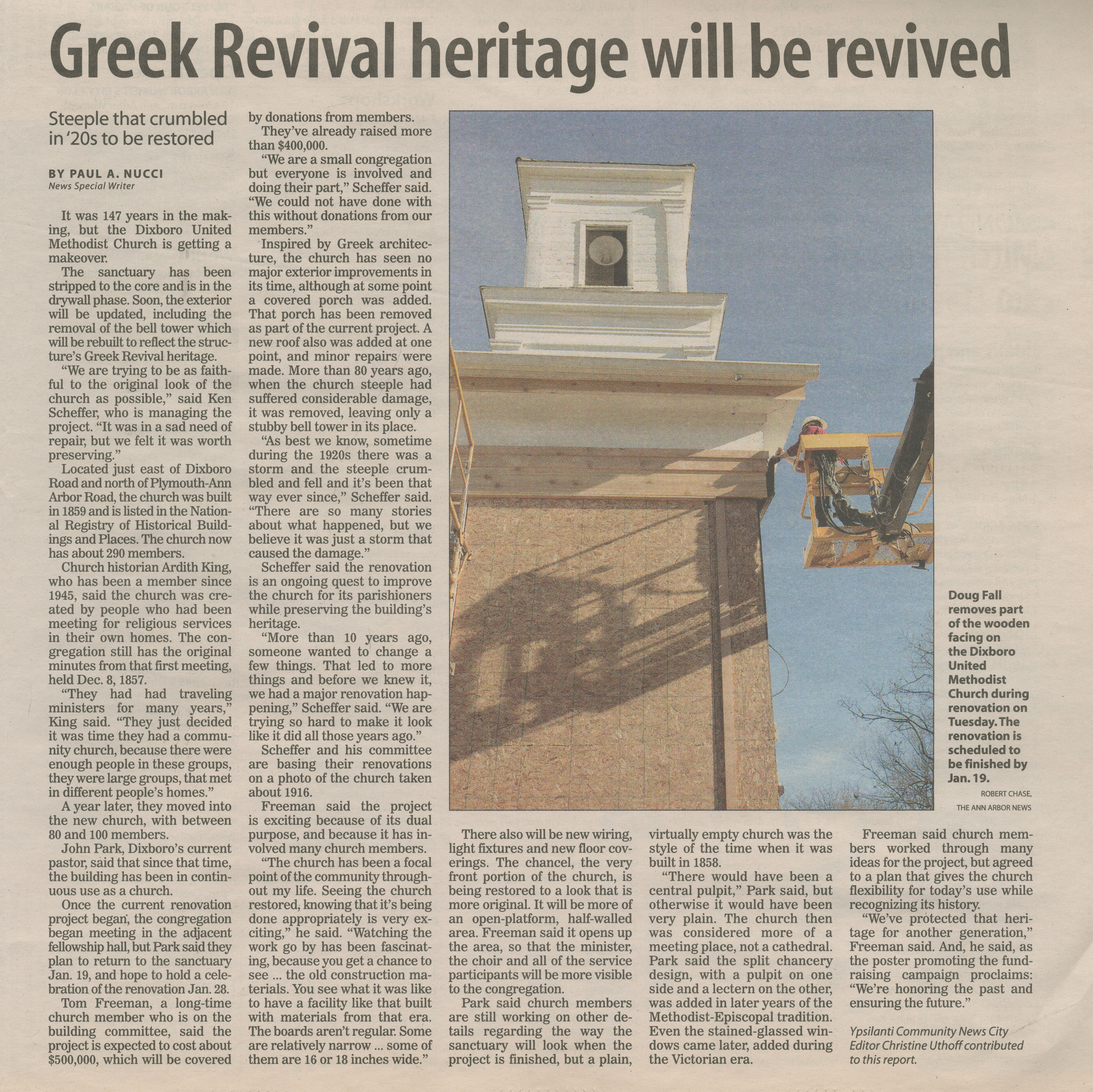 ﻿Greek Revival heritage will be revived

Steeple that crumbled in '20s to be restored

BY PAUL A. NUCCI

It was 147 years in the making, but the Dixboro United Methodist Church is getting a makeover.

The sanctuary has been stripped to the core and is in the drywall phase. Soon, the exterior will be updated, including the removal of the bell tower which will be rebuilt to reflect the structure’s Greek Revival heritage.

“We are trying to be as faithful to the original look of the church as possible,” said Ken Scheffer, who is managing the project. “It was in a sad need of repair, but we felt it was worth preserving.”

Located just east of Dixboro Road and north of Plymouth-Ann Arbor Road, the church was built in 1859 and is listed in the National Registry of Historical Buildings and Places. The church now has about 290 members.

Church historian Ardith King, who has been a member since 1945, said the church was created by people who had been meeting for religious services in their own homes. The congregation still has the original minutes from that first meeting, held Dec. 8,1857.

“They had had traveling ministers for many years,” King said. “They just decided it was time they had a community church, because there were enough people in these groups, they were large groups, that met in different people’s homes.”

A year later, they moved into the new church, with between 80 and 100 members.

John Park, Dixboro’s current pastor, said that since that time, the building has been in continuous use as a church.

Once the current renovation project began, the congregation began meeting in the adjacent fellowship hall, but Park said they plan to return to the sanctuary Jan. 19, and hope to hold a celebration of the renovation Jan. 28.

Tom Freeman, a long-time church member who is on the building committee, said the project is expected to cost about $500,000, which will be covered by donations from members.

“We are a small congregation but everyone is involved and doing their part,” Scheffer said. “We could not have done with this without donations from our members.”

Inspired by Greek architecture, the church has seen no major exterior improvements in its time, although at some point a covered porch was added. That porch has been removed as part of the current project. A new roof also was added at one point, and minor repairs were made. More than 80 years ago, when the church steeple had suffered considerable damage, it was removed, leaving only a stubby bell tower in its place.

“As best we know, sometime during the 1920s there was a storm and the steeple crumbled and fell and it’s been that way ever since,” Scheffer said. “There are so many stories about what happened, but we believe it was just a storm that caused the damage.”

Scheffer said the renovation is an ongoing quest to improve the church for its parishioners while preserving the building’s heritage.

“More than 10 years ago, someone wanted to change a few things. That led to more things and before we knew it, we had a major renovation happening,” Scheffer said. “We are trying so hard to make it look like it did all those years ago.”

Scheffer and his committee are basing their renovations on a photo of the church taken about 1916.

Freeman said the project is exciting because of its dual purpose, and because it has involved many church members.

“The church has been a focal point of the community throughout my life. Seeing the church restored, knowing that it’s being done appropriately is very exciting,” he said. “Watching the work go by has been fascinating, because you get a chance to see ... the old construction materials. You see what it was like to have a facility like that built with materials from that era. The boards aren’t regular. Some are relatively narrow... some of them are 16 or 18 inches wide.”

There also will be new wiring, light fixtures and new floor coverings. The chancel, the very front portion of the church, is being restored to a look that is more original. It will be more of an open-platform, half-walled area. Freeman said it opens up the area, so that the minister, the choir and all of the service participants will be more visible to the congregation.

Park said church members are still working on other details regarding the way the sanctuary will look when the project is finished, but a plain, virtually empty church was the style of the time when it was built in 1858.

“There would have been a central pulpit,” Park said, but otherwise it would have been very plain. The church then was considered more of a meeting place, not a cathedral. Park said the split chancery design, with a pulpit on one side and a lectern on the other, was added in later years of the Methodist-Episcopal tradition. Even the stained-glassed windows came later, added during the Victorian era.

Freeman said church members worked through many ideas for the project, but agreed to a plan that gives the church flexibility for today’s use while recognizing its history.

“We’ve protected that heritage for another generation,” Freeman said. And, he said, as the poster promoting the fundraising campaign proclaims: “We’re honoring the past and ensuring the future.”

Doug Fall removes part of the wooden facing on the Dixboro United Methodist Church during renovation on Tuesday. The renovation is scheduled to be finished by Jan. 19.
ROBERT CHASE, THE ANN ARBOR NEWS