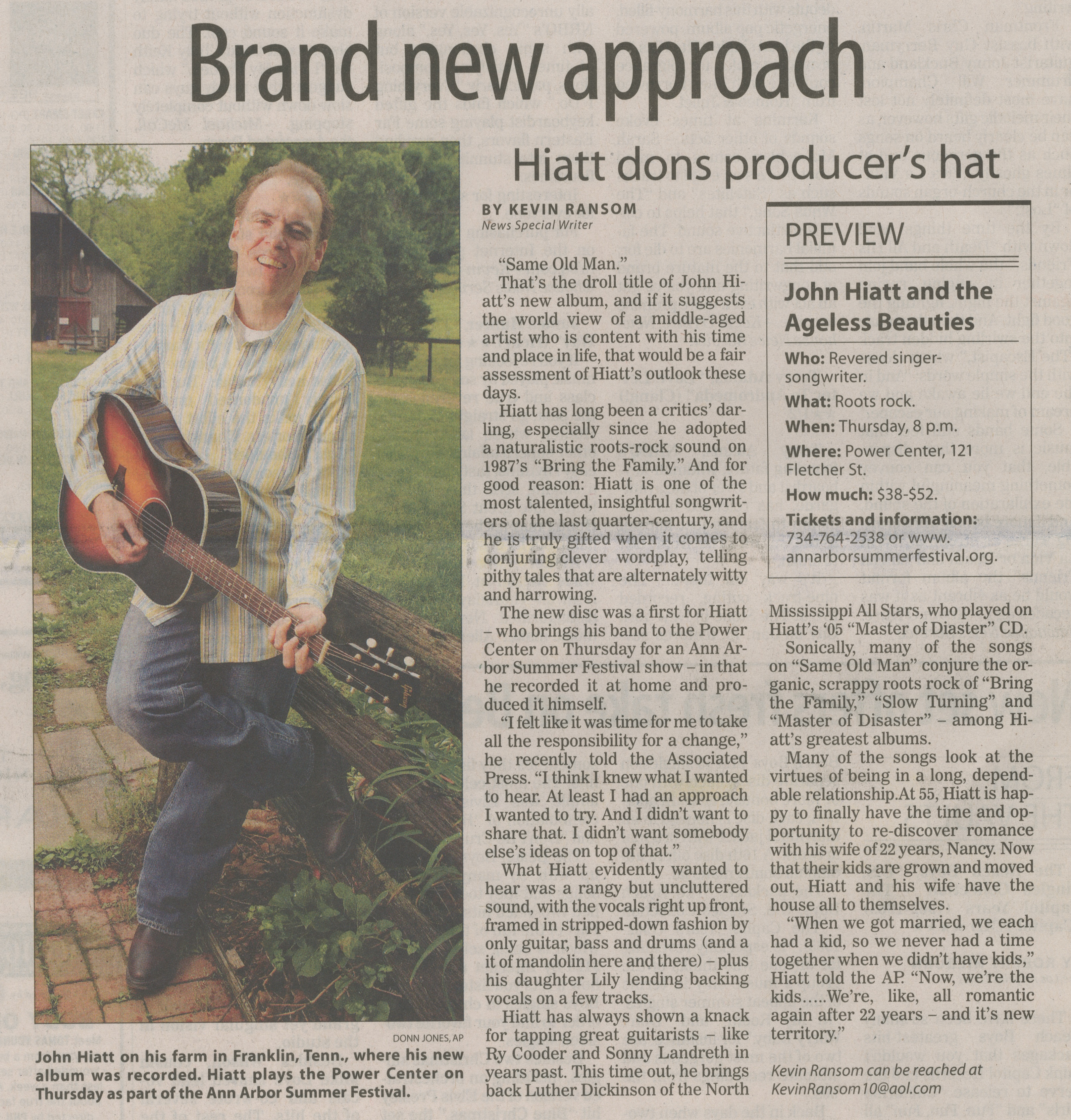 John Hiatt on his farm in Franklin, Tenn., where his new album was recorded. Hiatt plays the Power Center on Thursday as part of the Ann Arbor Summer Festival.

John Hiatt and the Ageless Beauties

Tickets and information: 734-764-2538 or www.annarborsummerfestival.org.

That’s the droll title of John Hiatt’s new album, and if it suggests the world view of a middle-aged artist who is content with his time and place in life, that would be a fair assessment of Hiatt’s outlook these days.

Hiatt has long been a critics’ darling, especially since he adopted a naturalistic roots-rock sound on 1987’s “Bring the Family.” And for good reason: Hiatt is one of the most talented, insightful songwriters of the last quarter-century, and he is truly gifted when it comes to conjuring clever wordplay, telling pithy tales that are alternately witty and harrowing.

The new disc was a first for Hiatt - who brings his band to the Power Center on Thursday for an Ann Arbor Summer Festival show - in that he recorded it at home and produced it himself.

“I felt like it was time for me to take all the responsibility for a change,” he recently told the Associated Press. “I think I knew what I wanted to hear. At least I had an approach I wanted to try. And I didn’t want to share that. I didn’t want somebody else’s ideas on top of that.”

What Hiatt evidently wanted to hear was a rangy but uncluttered sound, with the vocals right up front, framed in stripped-down fashion by only guitar, bass and drums (and a bit of mandolin here and there) - plus his daughter Lily lending backing vocals on a few tracks.

Hiatt has always shown a knack for tapping great guitarists - like Ry Cooder and Sonny Landreth in years past. This time out, he brings back Luther Dickinson of the North Mississippi All Stars, who played on Hiatt’s ‘05 “Master of Disaster” CD.

Sonically, many of the songs on “Same Old Man” conjure the organic, scrappy roots rock of “Bring the Family,” “Slow Turning” and “Master of Disaster” - among Hiatt’s greatest albums.

Many of the songs look at the virtues of being in a long, dependable relationship.At 55, Hiatt is happy to finally have the time and opportunity to re-discover romance with his wife of 22 years, Nancy. Now that their kids are grown and moved out, Hiatt and his wife have the house all to themselves.

“When we got married, we each had a kid, so we never had a time together when we didn’t have kids,” Hiatt told the AP. “Now, we’re the kids...We’re, like, all romantic again after 22 years - and it’s new territory.”

Kevin Ransom can be reached at KevinRansom10@aol.com