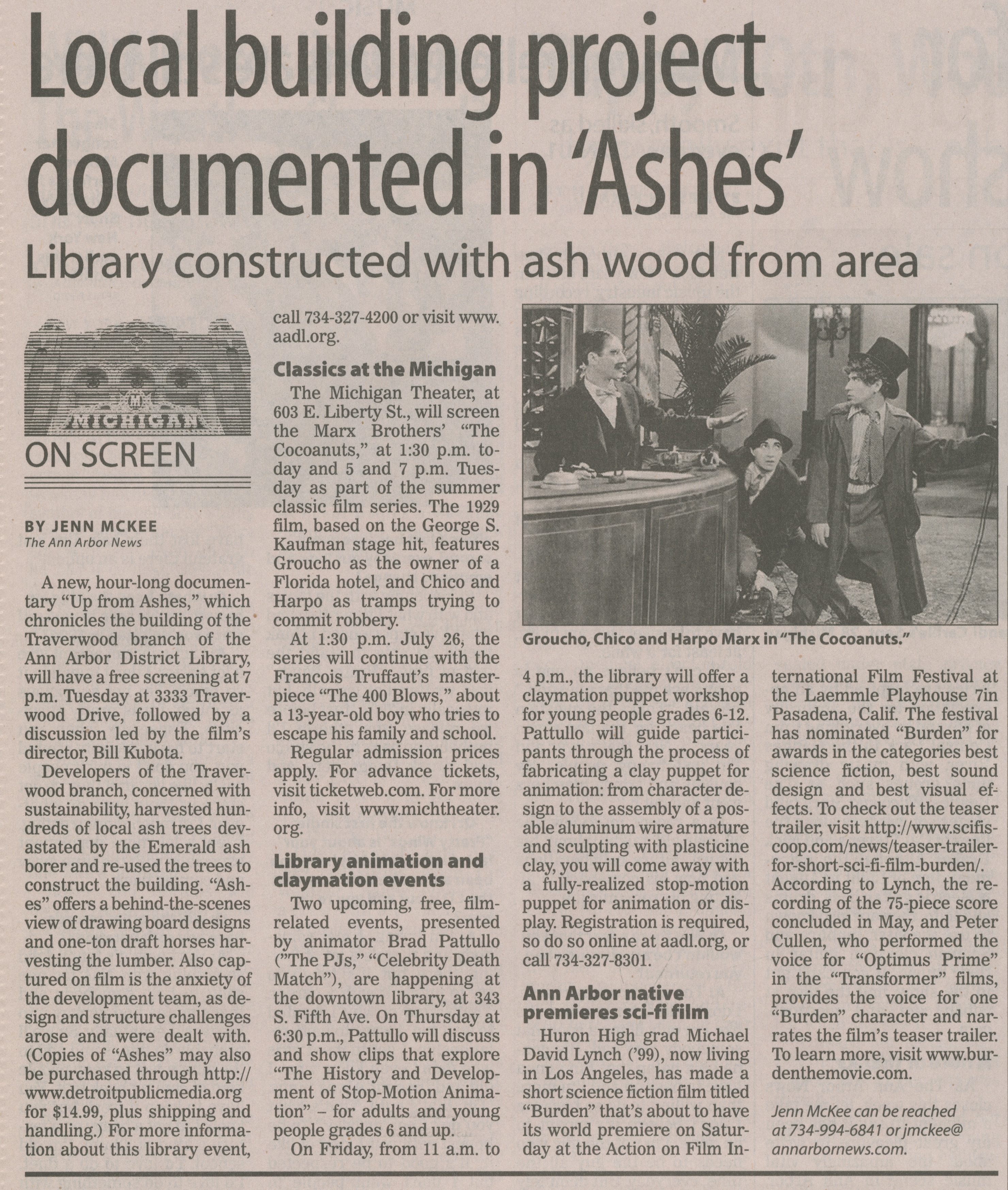 Groucho, Chico and Harpo Marx in "The Cocoanuts."

A new, hour-long documentary “Up from Ashes,” which chronicles the building of the Traverwood branch of the Ann Arbor District Library, will have a free screening at 7 p.m. Tuesday at 3333 Traverwood Drive, followed by a discussion led by the film’s director, Bill Kubota.

Developers of the Traverwood branch, concerned with sustainability, harvested hundreds of local ash trees devastated by the Emerald ash borer and re-used the trees to construct the building. “Ashes” offers a behind-the-scenes view of drawing board designs and one-ton draft horses harvesting the lumber. Also captured on film is the anxiety of the development team, as design and structure challenges arose and were dealt with. (Copies of “Ashes” may also be purchased through http:// www.detroitpublicmedia.org for $14.99, plus shipping and handling.) For more information about this library event, call 734-327-4200 or visit www. aadl.org.

Classics at the Michigan

The Michigan Theater, at 603 E. Liberty St., will screen the Marx Brothers’ “The Cocoanuts,” at 1:30 p.m. today and 5 and 7 p.m. Tuesday as part of the summer classic film series. The 1929 film, based on the George S. Kaufman stage hit, features Groucho as the owner of a Florida hotel, and Chico and Harpo as tramps trying to commit robbery.

At 1:30 p.m. July 26, the series will continue with the Francois Truffaut’s masterpiece “The 400 Blows,” about a 13-year-old boy who tries to escape his family and school.

Two upcoming, free, film-related events, presented by animator Brad Pattullo (’’The PJs,” “Celebrity Death Match”), are happening at the downtown library, at 343 S. Fifth Ave. On Thursday at 6:30 p.m., Pattullo will discuss and show clips that explore “The History and Development of Stop-Motion Animation” - for adults and young people grades 6 and up.

On Friday, from 11 a.m. to 4 p.m., the library will offer a claymation puppet workshop for young people grades 6-12. Pattullo will guide participants through the process of fabricating a clay puppet for animation: from character design to the assembly of a posable aluminum wire armature and sculpting with plasticine clay, you will come away with a fully-realized stop-motion puppet for animation or display. Registration is required, so do so online at aadl.org, or call 734-327-8301.

Huron High grad Michael David Lynch (’99), now living in Los Angeles, has made a short science fiction film titled “Burden” that’s about to have its world premiere on Saturday at the Action on Film International Film Festival at the Laemmle Playhouse 7 in Pasadena, Calif. The festival has nominated “Burden” for awards in the categories best science fiction, best sound design and best visual effects. To check out the teaser trailer, visit http://www.scifis-coop.com/news/teaser-trailer-for-short-sci-fi-film-burden/. According to Lynch, the recording of the 75-piece score concluded in May, and Peter Cullen, who performed the voice for “Optimus Prime” in the “Transformer” films, provides the voice for one “Burden” character and narrates the film’s teaser trailer. To learn more, visit www.burdenthemovie.com.