Russell Means "We're After Our Heritage" 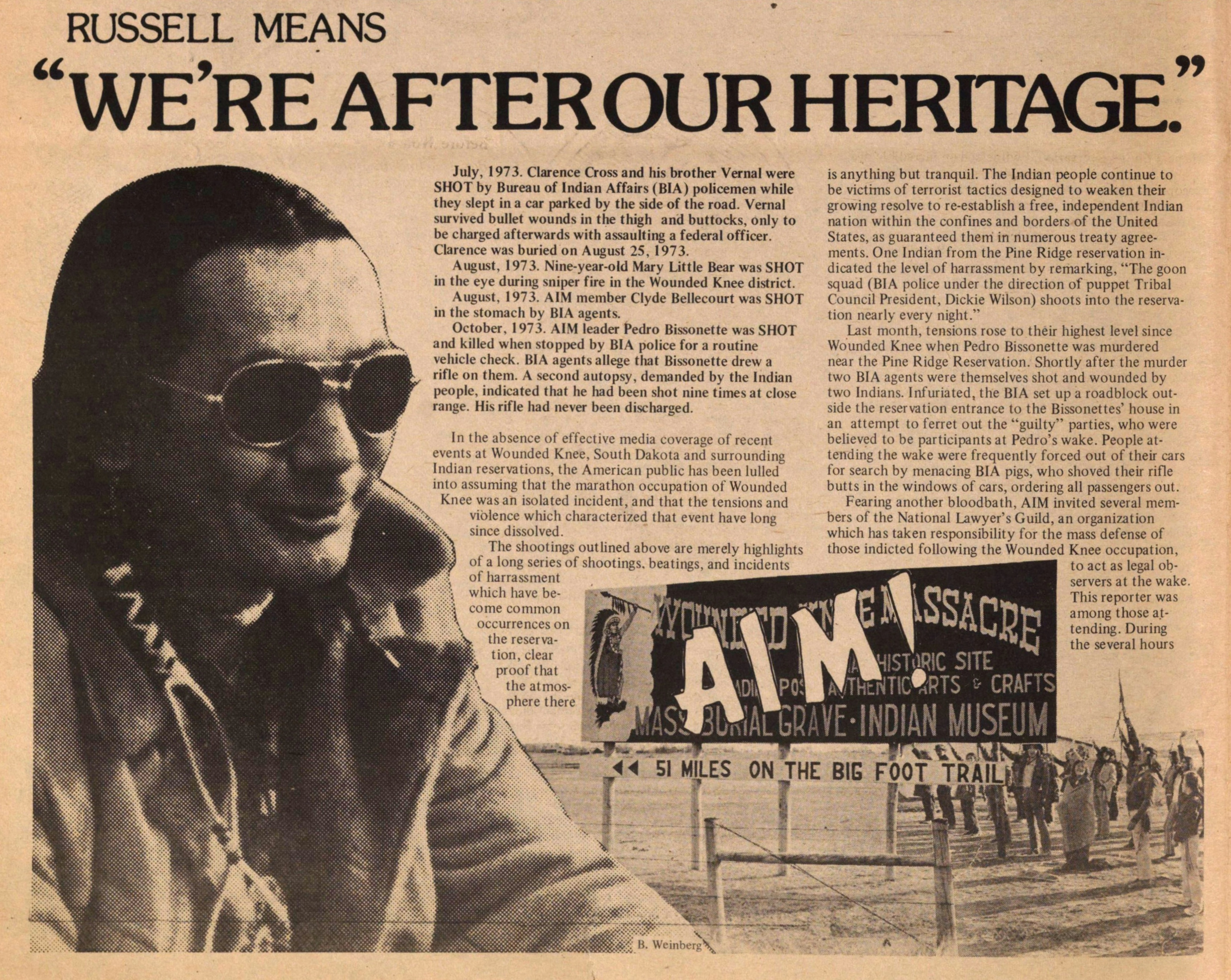 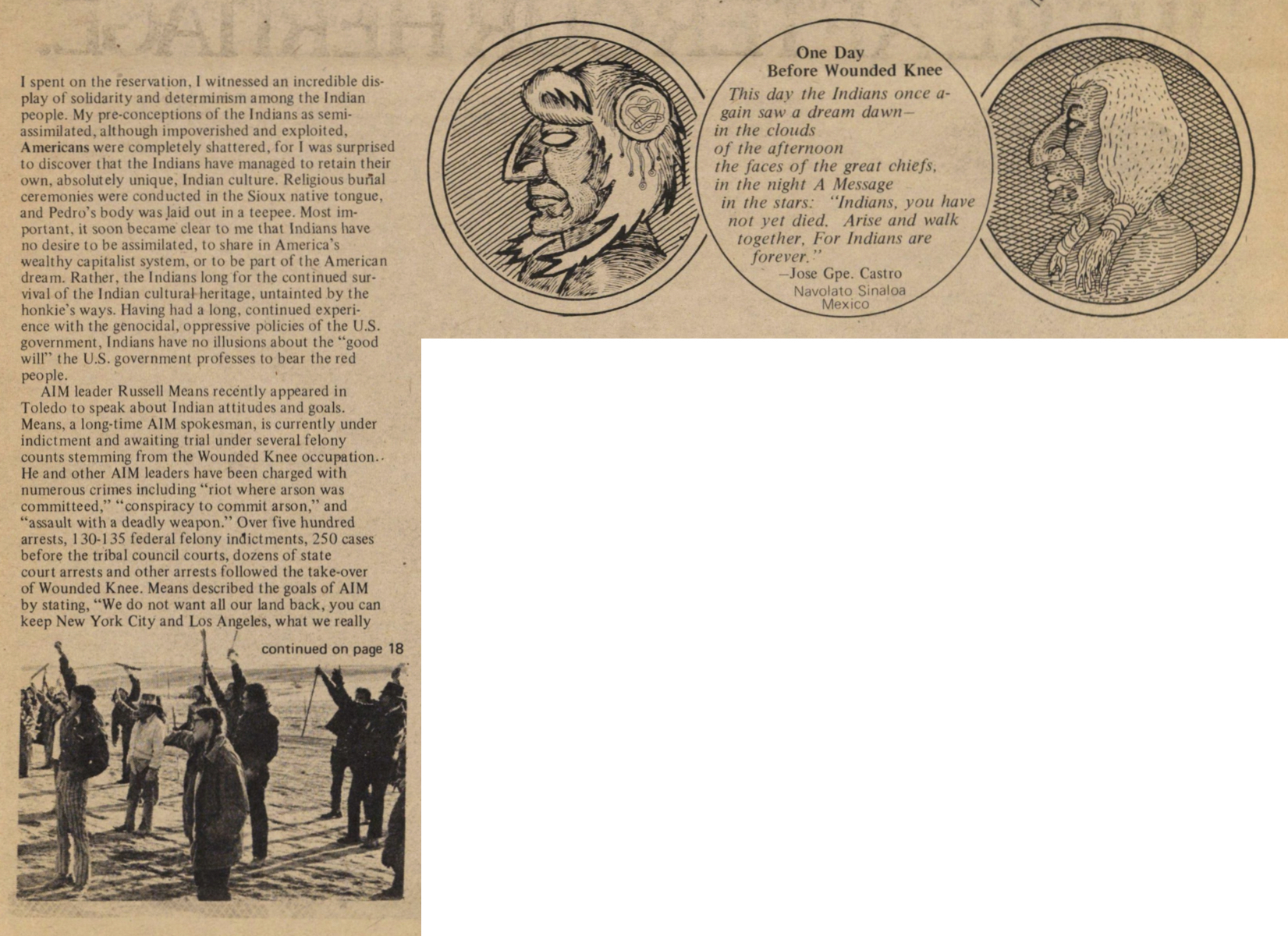 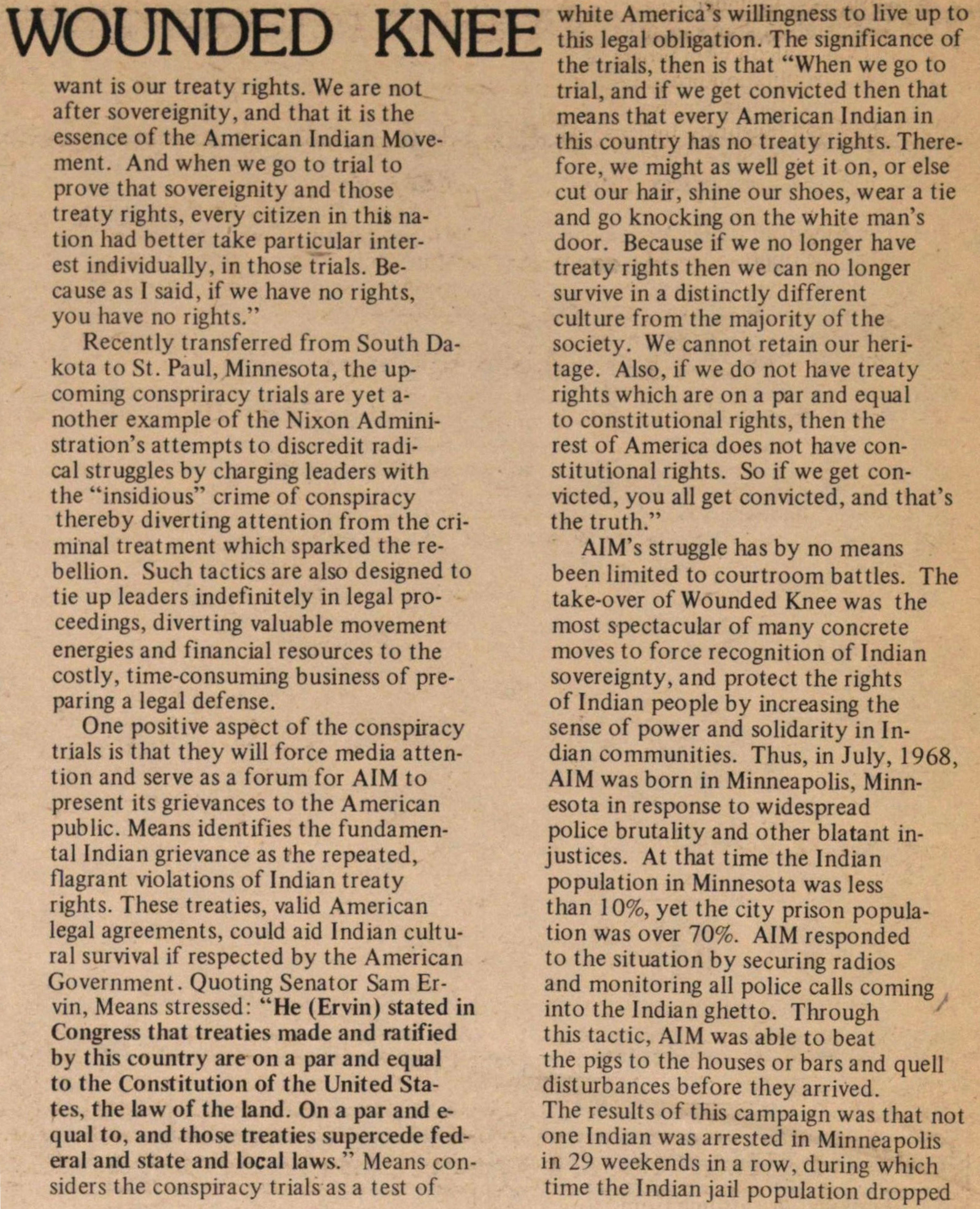 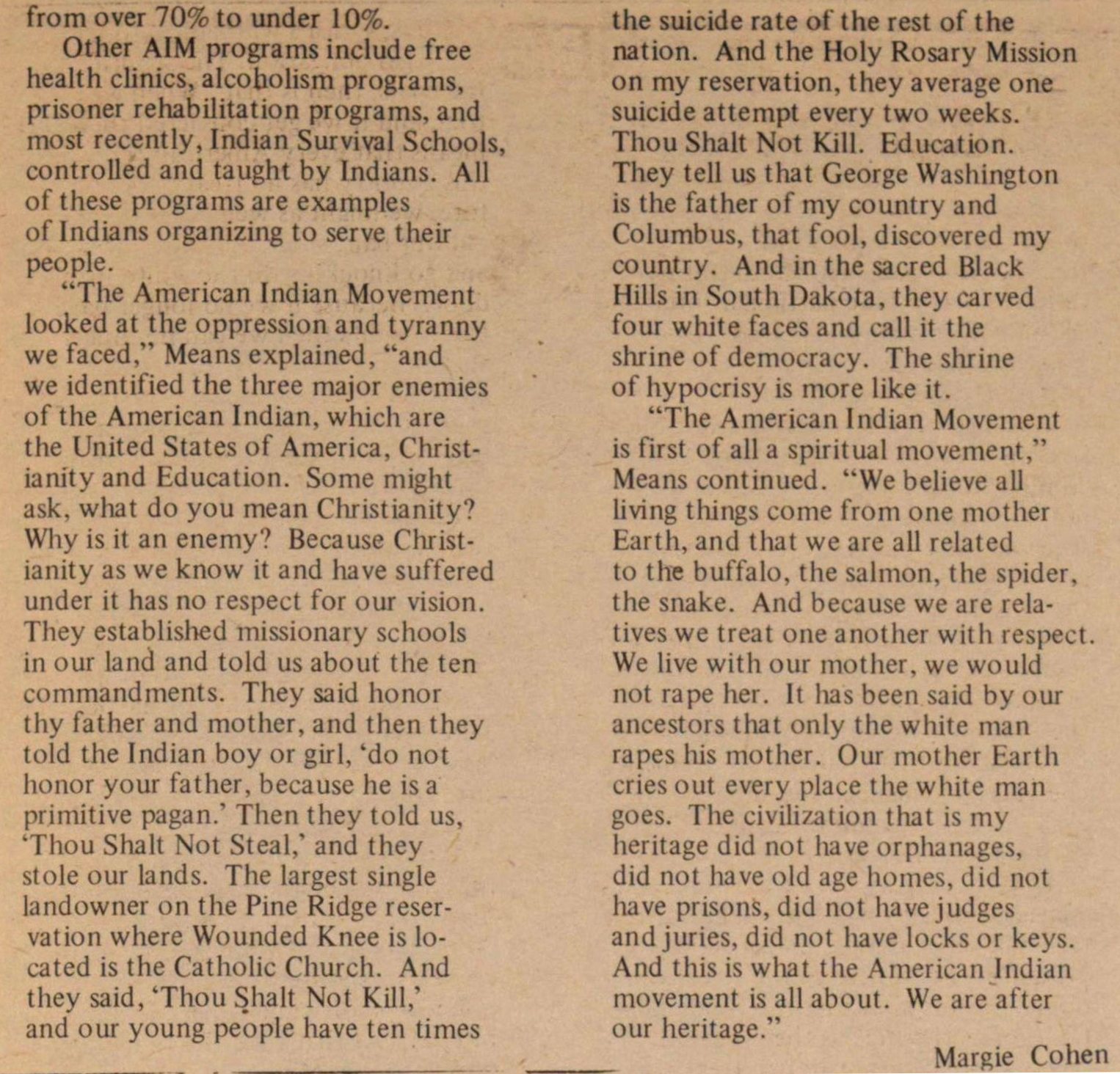 want is our treaty rights. We are not after sovereignty, and that it is the essence of the American Indian Movement. And when we go to trial to prove that sovereignty and those treaty rights, every citizen in this nation had better take particular interest individually, in those trials. Because as I said, if we have no rights, you have no rights."

Recently transferred from South Dakota to St. Paul, Minnesota, the upcoming conspiracy trials are yet another example of the Nixon Administration's attempts to discredit radical struggles by charging leaders with the "insidious" crime of conspiracy thereby diverting attention from the criminal treatment which sparked the rebellion. Such tactics are also designed to tie up leaders indefinitely in legal proceedings, diverting valuable movement energies and financial resources to the costly, time-consuming business of preparing a legal defense.

One positive aspect of the conspiracy trials is that they will force media attention and serve as a forum for AIM to present its grievances to the American public. Means identifies the fundamental Indian grievance as the repeated, flagrant violations of Indian treaty rights. These treaties, valid American legal agreements, could aid Indian cultural survival if respected by the American Government. Quoting Senator Sam Ervin, Means stressed: "He (Ervin) stated in Congress that treaties made and ratified by this country are on a par and equal to the Constitution of the United States, the law of the land. On a par and equal to, and those treaties supersede federal and state and local laws." Means considers the conspiracy trials as a test of white America's willingness to live up to this legal obligation. The significance of the trials, then is that "When we go to trial, and if we get convicted then that means that every American Indian in this country has no treaty rights. Therefore, we might as well get it on, or else cut our hair, shine our shoes, wear a tie and go knocking on the white man's door. Because if we no longer have treaty rights then we can no longer survive in a distinctly different culture from the majority of the society. We cannot retain our heritage. Also, if we do not have treaty rights which are on a par and equal to constitutional rights, then the rest of America does not have constitutional rights. So if we get convicted, you all get convicted, and that's the truth."

AIM's struggle has by no means been limited to courtroom battles. The take-over of Wounded Knee was the most spectacular of many concrete moves to force recognition of Indian sovereignty, and protect the rights of Indian people by increasing the sense of power and solidarity in Indian communities. Thus, in July 1968, AIM was born in Minneapolis, Minnesota in response to widespread pólice brutality and other blatant injustices. At that time the Indian population in Minnesota was less than 10%, yet the city prison population was over 70%. AIM responded to the situation by securing radios and monitoring all police calls coming into the Indian ghetto. Through this tactic, AIM was able to beat the pigs to the houses or bars and quell disturbances before they arrived. The results of this campaign was that not one Indian was arrested in Minneapolis in 29 weekends in a row, during which time the Indian jail population dropped from over 70% to under 10%.

Other AIM programs include free health clinics, alcoholism programs, prisoner rehabilitation programs, and most recently, Indian Survival Schools, controlled and taught by Indians. All of these programs are examples of Indians organizing to serve their people.

"The American Indian Movement looked at the oppression and tyranny we faced," Means explained, "and we identified the three major enemies of the American Indian, which are the United States of America, Christianity, and Education. Some might ask. what do you mean Christianity? Why is it an enemy? Because Christianity as we know it and have suffered under it has no respect for our vision. They established missionary schools in our land and told us about the ten commandments. They said honor thy father and mother, and then they told the Indian boy or girl, 'do not honor your father, because he is a primitive pagan.' Then they told us, 'Thou Shalt Not Steal,' and they stole our lands. The largest single landowner on the Pine Ridge reservation where Wounded Knee is located is the Catholic Church. And they said, 'Thou Shalt Not Kill,' and our young people have ten times the suicide rate of the rest of the nation. And the Holy Rosary Mission on my reservation, they average one suicide attempt every two weeks. Thou Shalt Not Kill. Education. They tell us that George Washington is the father of my country and Columbus, that fool, discovered my country. And in the sacred Black Hills in South Dakota, they carved four white faces and call it the shrine of democracy. The shrine of hypocrisy is more like it.

"The American Indian Movement is first of all a spiritual movement," Means continued. "We believe all living things come from one mother Earth, and that we are all related to the buffalo, the salmon, the spider, the snake. And because we are relatives we treat one another with respect. We live with our mother, we would not rape her. It has been said by our ancestors that only the white man rapes his mother. Our mother Earth cries out every place the white man goes. The civilization that is my heritage did not have orphanages, did not have oíd age homes, did not have prisons, did not have judges and juries, did not have locks or keys. And this is what the American Indian movement is all about. We are after our heritage."