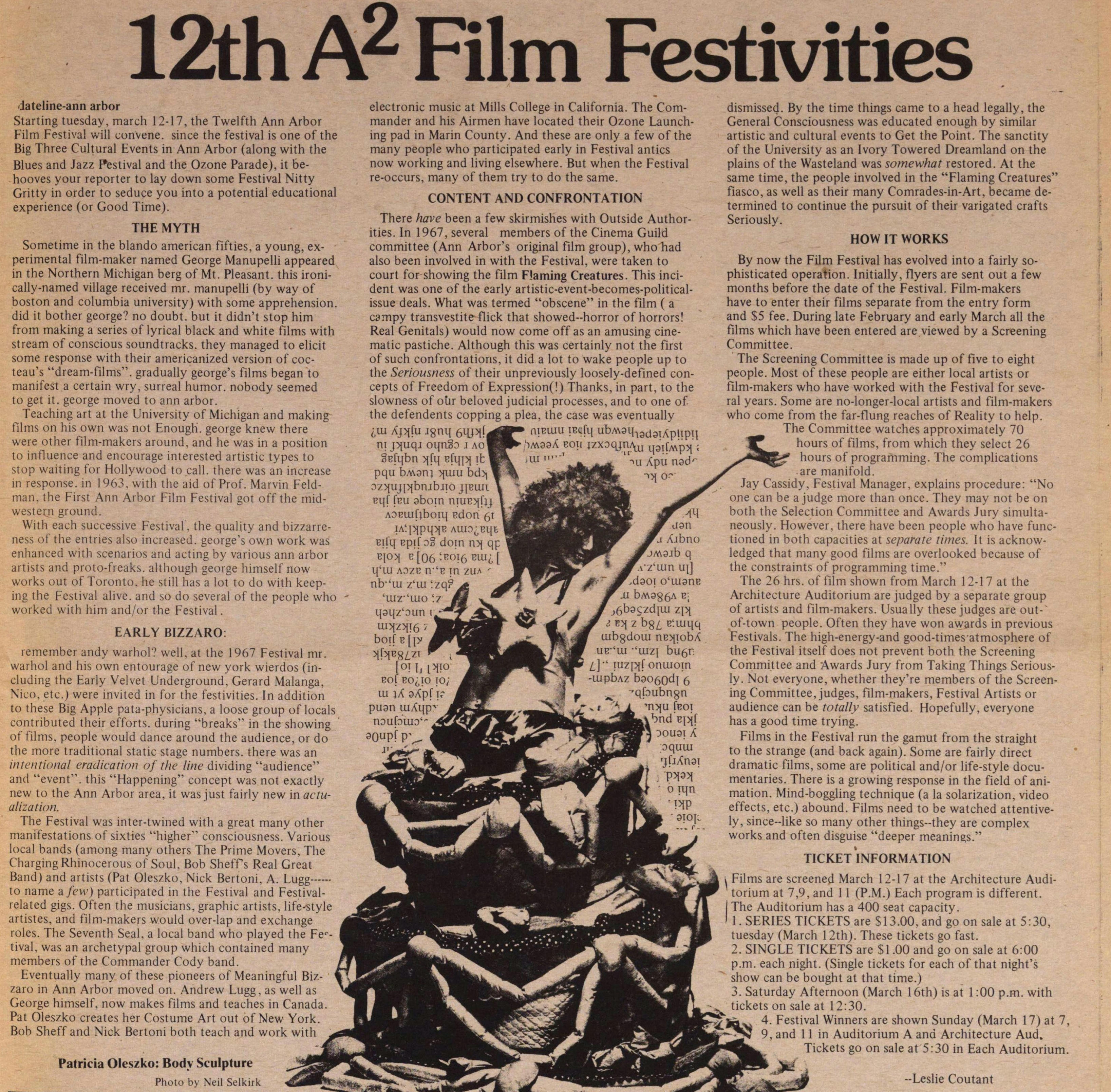 Starting tuesday, march 12-17, the Twelfth Ann Arbor Film Festival will convene, since the festival is one of the Big Three Cultural Events in Ann Arbor (along with the Blues and Jazz Festival and the Ozone Parade), it behooves your reporter to lay down some Festival Nitty Gritty in order to seduce you into a potential educational experience (or Good Time).

Sometime in the blando american fifties, a young, experimental film-maker named George Manupelli appeared in the Northern Michigan berg of Mt. Pleasant. this ironically-named village received mr. manupelli (by way of boston and columbia university) with some apprehension. did it bother george? no doubt, but it didn't stop him from making a series of lyrical black and white films with stream of conscious soundtracks, they managed to elicit some response with their americanized version of cocteau's "dream-films". gradually george's films began to manifest a certain wry, surreal humor, nobody seemed to get it. george moved to ann arbor.

Teaching art at the University of Michigan and making films on his own was not Enough. george knew there were other film-makers around, and he was in a position to influence and encourage interested artistic types to stop waiting for Hollywood to call, there was an increase in response. in 1963, with the aid of Prof. Marvin Feldman, the First Ann Arbor Film Festival got off the midwestem ground.

With each successive Festival, the quality and bizzarreness of the entries also increased. george's own work was enhanced with scenarios and acting by various ann arbor artists and proto-freaks. although george himself now works out of Toronto, he still has a lot to do with keeping the Festival alive. and so do several of the people who worked with him and/or the Festival.

remember andy warhol? well, at the 1967 Festival mr. warhol and his own entourage of new york wierdos (including the Early Velvet Underground, Gerard Malanga, Nico, etc.) were invited in for the festivities. In addition to these Big Apple pata-physicians, a loose group of locals contributed their efforts. during "breaks" in the showing of films, people would dance around the audience, or do the more traditional static stage numbers. there was an intentional eradication of the line dividing "audience" and "event". this "Happening" concept was not exactly new to the Ann Arbor area, it was just fairly new in actualization.

The Festival was inter-twined with a great many other manifestations of sixties "higher" consciousness. Various local bands (among many others The Prime Movers, The Charging Rhinocerous of Soul. Bob Sheff's Real Great Band) and artists (Pat Oleszko, Nick Bertoni, A. Lugg to name a few) participated in the Festival and Festival related gigs. Often the musicians, graphic artists, life-style artistes, and film-makers would over-lap and exchange roles. The Seventh Seal, a local band who played the Festival, was an archetypal group which contained many members of the Commander Cody band.

Eventually many of these pioneers of Meaningful Bizzaro in Ann Arbor moved on. Andrew Lugg, as well as George himself, now makes films and teaches in Canada. Pat Oleszko creates her Costume Art out of New York. Bob Sheff and Nick Bertoni both teach and work with electronic music at Mills College in California. The Commander and his Airmen have located their Ozone Launching pad in Marin County. And these are only a few of the many people who participated early in Festival antics now working and living elsewhere. But when the Festival re-occurs, many of them try to do the same.

There have been a few skirmishes with Outside Authorities. In 1967, several members of the Cinema Guild committee (Ann Arbor's original film group), who had also been involved in with the Festival, were taken to court for showing the film Flaming Creatures. This incident was one of the early artistic-event-becomes-political-issue deals. What was termed "obscene" in the film (a campy transvestite flick that showed--horror of horrors! Real Genitals) would now come off as an amusing cinematic pastiche. Although this was certainly not the first of such confrontations, it did a lot to wake people up to the Seriousness of their unpreviously loosely-defined concepts of Freedom of Expression(!) Thanks, in part, to the slowness of our beloved judicial processes, and to one of the defendants copping a plea, the case was eventually dismissed. By the time things came to a head legally, the General Consciousness was educated enough by similar artistic and cultural events to Get the Point. The sanctity of the University as an Ivory Towered Dreamland on the plains of the Wasteland was somewhat restored. At the same time, the people involved in the "Flaming Creatures" fiasco, as well as their many Comrades-in-Art, became determined to continue the pursuit of their varigated crafts Seriously.

By now the Film Festival has evolved into a fairly sophisticated operation. Initially, flyers are sent out a few months before the date of the Festival. Film-makers have to enter their films separate from the entry form and $5 fee. During late February and early March all the films which have been entered are viewed by a Screening Committee.

The Screening Committee is made up of five to eight people. Most of these people are either local artists or film-makers who have worked with the Festival for several years. Some are no-longer-local artists and film-makers who come from the far-flung reaches of Reality to help.

The Committee watches approximately 70 hours of films, from which they select 26 hours of programming. The complications are manifold.

Jay Cassidy, festival Manager, explains procedure: "No one can be a judge more than once. They may not be on both the Selection Committee and Awards Jury simultaneously. However, there have been people who have functioned in both capacities at separate times. It is acknowledged that many good films are overlooked because of the constraints of programming time."

The 26 hrs. of film shown from March 12-17 at the Architecture Auditorium are judged by a separate group of artists and film-makers. Usually these judges are out-of-town people. Often they have won awards in previous Festivals. The high-energy-and good-times atmosphere of the Festival itself does not prevent both the Screening Committee and Awards Jury from Taking Things Seriously. Not everyone, whether they're members of the Screening Committee, judges, film-makers. Festival Artists or audience can be totally satisfied. Hopefully, everyone has a good time trying.

Films in the Festival run the gamut from the straight to the strange (and back again). Some are fairly direct dramatic films, some are political and/or life-style documentaries. There is a growing response in the field of animation. Mind-boggling technique (a la solarization, video effects, etc.) abound. Films need to be watched attentively, since--like so many other things--they are complex works and often disguise "deeper meanings."

Films are screened March 12-17 at the Architecture Auditorium at 7,9, and 11 (P.M.) Each program is different. The Auditorium has a 400 seat capacity.