Um Regents To Profit From Censorship 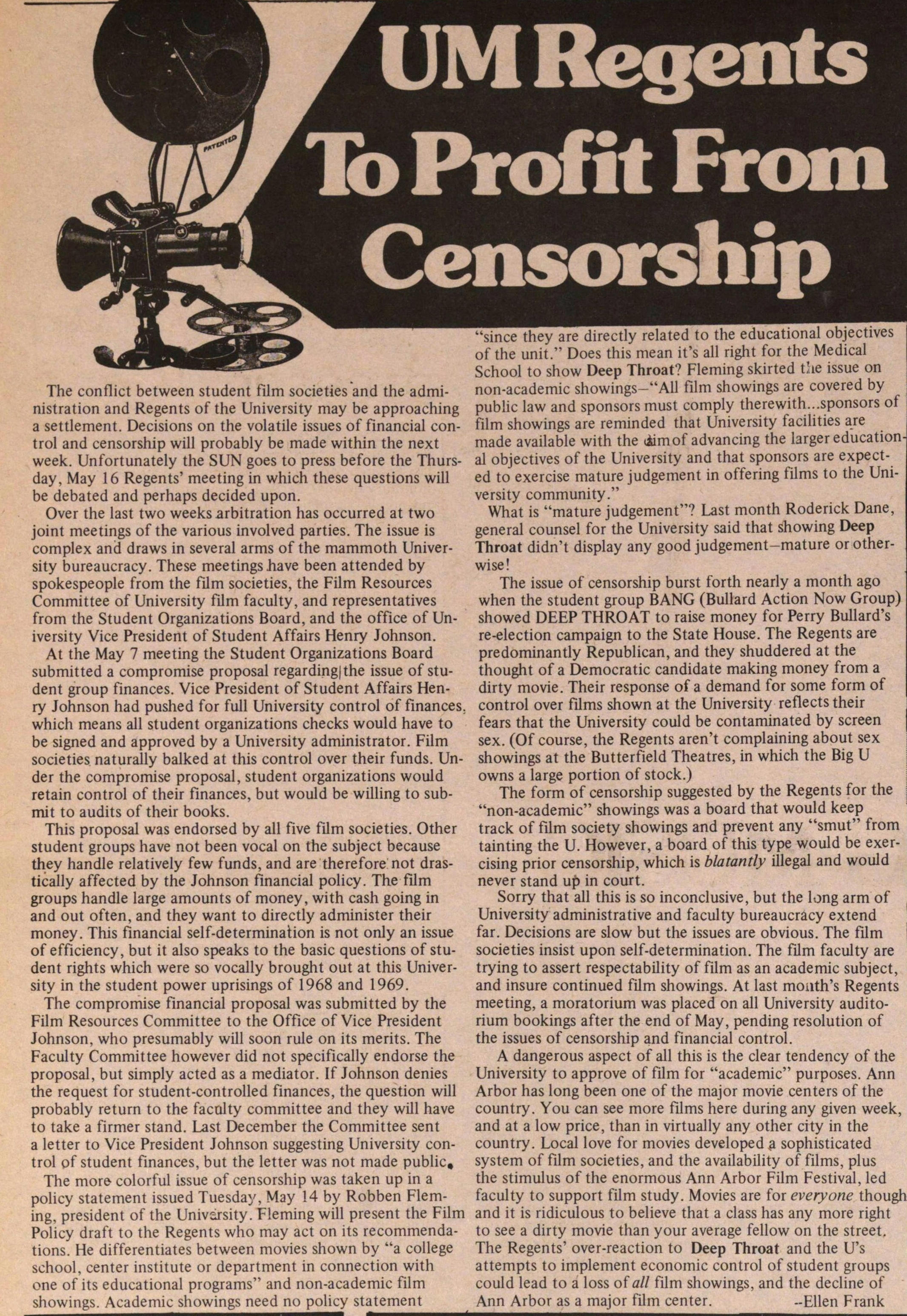 UM Regents To Profit From Censorship

The conflict between student film societies and the administration and Regents of the University may be approaching a settlement. Decisions on the volatile issues of financial control and censorship will probably be made within the next week. Unfortunately the SUN goes to press before the Thursday, May 16 Regents' meeting in which these questions will be debated and perhaps decided upon.

Over the last two weeks arbitration has occurred at two joint meetings of the various involved parties. The issue is complex and draws in several arms of the mammoth University bureaucracy. These meetings have been attended by spokespeople from the film societies, the Film Resources Committee of University film faculty, and representatives from the Student Organizations Board, and the office of University Vice President of Student Affairs Henry Johnson.

At the May 7 meeting the Student Organizations Board submitted a compromise proposal regarding the issue of student group finances. Vice President of Student Affairs Henry Johnson had pushed for full University control of finances, which means all student organizations checks would have to be signed and approved by a University administrator. Film societies naturally balked at this control over their funds. Under the compromise proposal, student organizations would retain control of their finances, but would be willing to submit to audits of their books.

This proposal was endorsed by all five film societies. Other student groups have not been vocal on the subject because they handle relatively few funds, and are therefore not drastically affected by the Johnson financial policy. The film groups handle large amounts of money, with cash going in and out often, and they want to directly administer their money. This financial self-determination is not only an issue of efficiency, but it also speaks to the basic questions of student rights which were so vocally brought out at this University in the student power uprisings of 1968 and 1969.

The compromise financial proposal was submitted by the Film Resources Committee to the Office of Vice President Johnson, who presumably will soon rule on its merits. The Faculty Committee however did not specifically endorse the proposal, but simply acted as a mediator. If Johnson denies the request for student-controlled finances, the question will probably return to the faculty committee and they will have to take a firmer stand. Last December the Committee sent a letter to Vice President Johnson suggesting University control of student finances, but the letter was not made public.

The colorful issue of censorship was taken up in a policy statement issued Tuesday, May 14 by Robben Fleming, president of the University. Fleming will present the Film Policy draft to the Regents who may act on its recommendations. He differentiates between movies shown by "a college school, center institute or department in connection with one of its educational programs" and non-academic film showings. Academic showings need no policy statement "since they are directly related to the educational objectives of the unit." Does this mean it's all right for the Medical School to show Deep Throat? Fleming skirted the issue on non-academic showings-"All film showings are covered by public law and sponsors must comply therewith... sponsors of film showings are reminded that University facilities are made available with the aim of advancing the larger educational objectives of the University and that sponsors are expected to exercise mature judgement in offering films to the University community."

The issue of censorship burst forth nearly a month ago when the student group BANG (Bullard Action Now Group) showed DEEP THROAT to raise money for Perry Bullard's re-election campaign to the State House. The Regents are predominantly Republican, and they shuddered at the thought of a Democratic candidate making money from a dirty movie. Their response of a demand for some form of control over films shown at the University reflects their fears that the University could be contaminated by screen sex. (Of course, the Regents aren't complaining about sex showings at the Butterfield Theatres, in which the Big U owns a large portion of stock.)

The form of censorship suggested by the Regents for the "non-academic" showings was a board that would keep track of film society showings and prevent any "smut" from tainting the U. However, a board of this type would be exercising prior censorship, which is blatantly illegal and would never stand up in court.

Sorry that all this is so inconclusive, but the long arm of University administrative and faculty bureaucracy extend far. Decisions are slow but the issues are obvious. The film societies insist upon self-determination. The film faculty are trying to assert respectability of film as an academic subject, and insure continued film showings. At last mouth's Regents meeting, a moratorium was placed on all University auditorium bookings after the end of May, pending resolution of the issues of censorship and financial control.

A dangerous aspect of all this is the clear tendency of the University to approve of film for "academic" purposes. Ann Arbor has long been one of the major movie centers of the country. You can see more films here during any given week, and at a low price, than in virtually any other city in the country. Local love for movies developed # sophisticated system of film societies, and the availability of films, plus the stimulus of the enormous Ann Arbor Film Festival, led faculty to support film study. Movies are for everyone though and it is ridiculous to believe that a class has any more right to see a dirty movie than your average fellow on the street. The Regents' over-reaction to Deep Throat and the U's attempts to implement economic control of student groups could lead to a loss of all film showings, and the decline of Ann Arbor as a major film center.