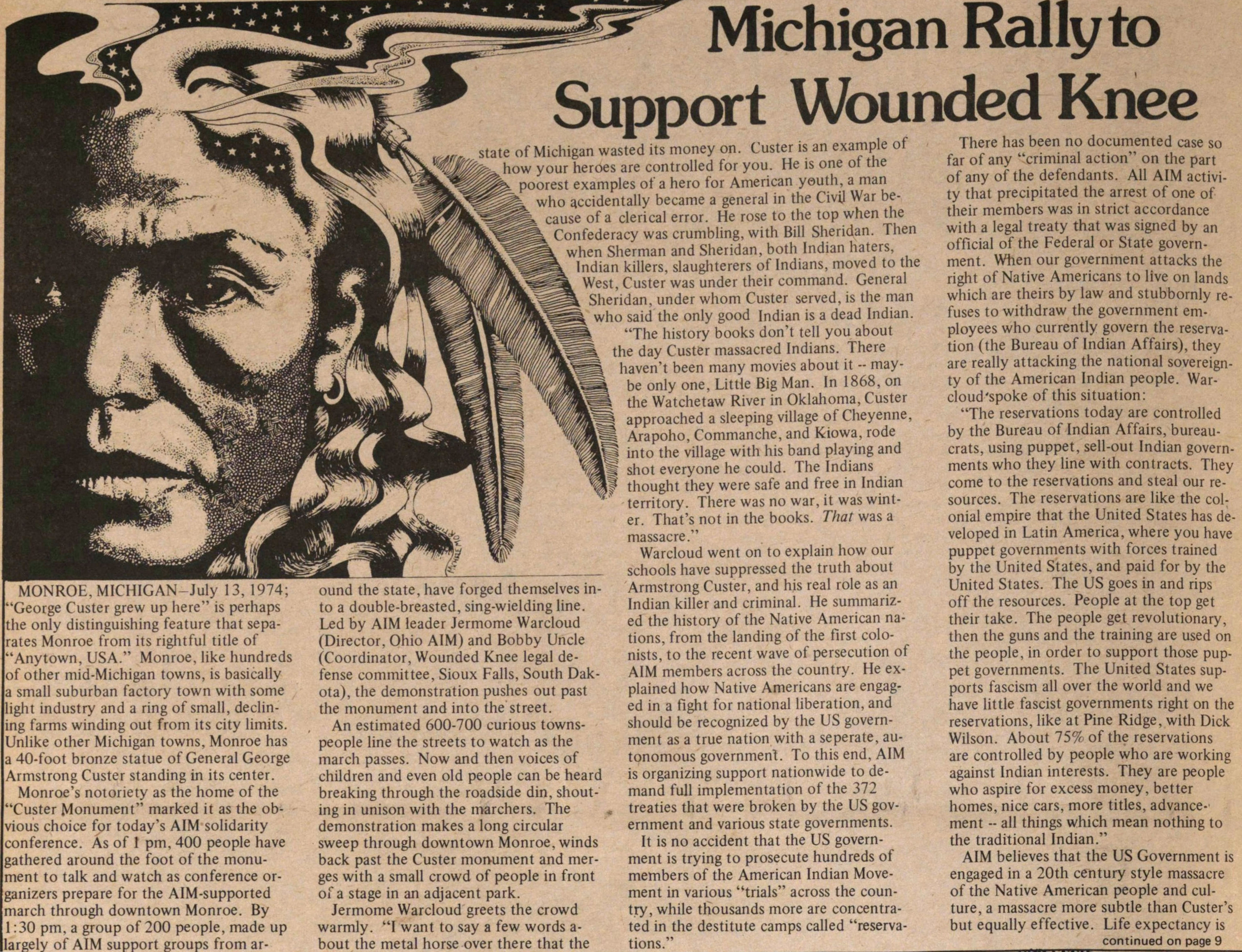 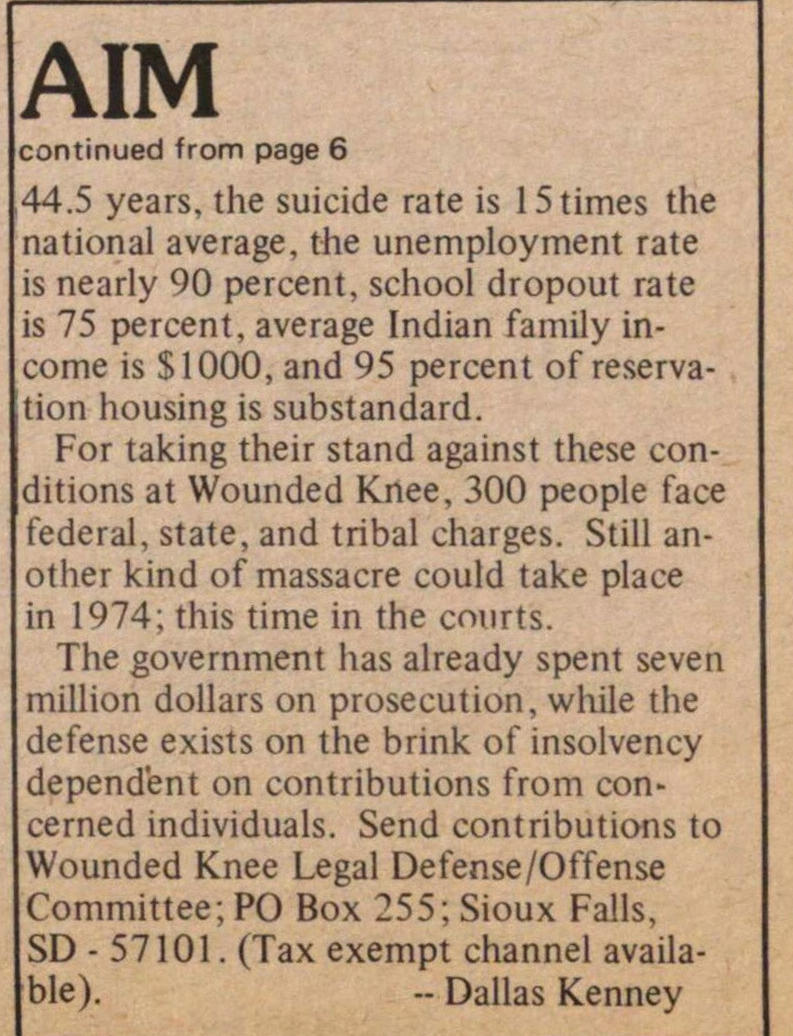 MONROE, MICHIGAN -- July 13, 1974; "George Custer grew up here" is perhaps the only distinguishing feature that separates Monroe from its rightful title of "Anytown, USA." Monroe, like hundreds of other mid-Michigan towns, is basically a small suburban factory town with some light industry and a ring of small, declining farms winding out from its city limits. Unlike other Michigan towns, Monroe has a 40-foot bronze statue of General George Armstrong Custer standing in its center.

Monroe's notoriety as the home of the "Custer Monument" marked it as the obvious choice for today's AIMsolidarity conference. As of 1 pm, 400 people have gathered around the foot of the monument to talk and watch as conference organizers prepare for the AIM-supported march through downtown Monroe. By 1:30 pm, a group of 200 people, made up largely of AIM support groups from around the state, have forged themselves into a double-breasted, sign-wielding line. Led by AIM leader Jerome Warcloud (Director, Ohio AIM) and Bobby Uncle (Coordinator, Wounded Knee legal defense committee, Sioux Falls, South Dakota), the demonstration pushes out past the monument and into the street.

An estimated 600 - 700 curious townspeople line the streets to watch as the march passes. Now and then voices of children and even old people can be heard breaking through the roadside din, shouting in unison with the marchers. The demonstration makes a long circular sweep through downtown Monroe, winds back past the Custer monument and merges with a small crowd of people in front of a stage in an adjacent park.

Jerome Warcloud greets the crowd warmly. "I want to say a few words about the metal horse over there that the state of Michigan wasted its money on. Custer is an example of how your heroes are controlled for you. He is one of the poorest examples of a hero for American youth, a man who accidentally became a general in the Civil War because of a clerical error. He rose to the top when the Confederacy was crumbling, with Bill Sheridan. Then when Sherman and Sheridan, both Indian haters, Indian killers, slaughterers of Indians, moved to the West, Custer was under their command. General Sheridan, under whom Custer served, is the man who said the only good Indian is a dead Indian.

"The history books don't tell you about the day Custer massacred Indians. There haven't been many movies about it - maybe only one, Little Big Man. In 1868, on the Watchetaw River in Oklahoma, Custer approached a sleeping village of Cheyenne, Arapoho, Commanche, and Kiowa, rode into the village with his band playing and shot everyone he could. The Indians thought they were safe and free in Indian territory. There was no war, it was winter. That's not in the books. That was the massacre."

Warcloud went on to explain how our schools have suppressed the truth about Armstrong Custer, and his real role as an Indian killer and criminal. He summarized the history of the Native American nations, from the landing of the first colonists, to the recent wave of persecution of AIM members across the country. He explained how Native Americans are engaged in a fight for national liberation, and should be recognized by the US government as a true nation with a seperate, autonomous government. To this end, AIM is organizing support nationwide to demand full implementation of the 372 treatures that were broken by the US government and various state governments.

It is no accident that the US government is trying to prosecute hundreds of members of the American Indian Movement in various "trials" across the country, while thousands more are concentrated in the destitute camps called "reservations."

There has been no documented case so far of any "criminal action" on the part of any of the defendants. All AIM activity that precipitated the arrest of one of their members was in strict accordance with a legal treaty that was signed by an official of the Federal or State government. When our government attacks the right of Native Americans to live on lands which are theirs by law and stubbornly refuses to withdraw the government employees who currently govern the reservation (the Bureau of Indian Affairs), they are really attacking the national sovereignty of the American Indian people. Warcloud spoke of this situation:

AIM believes that the US government is engaged in a 20th century style massacre of the Native American people and culture, a massacre more subtle than Custer's but equally effective. Life expectancy is 44.5 years, the suicide rate is 15 times the national average, the unemployment rate is nearly 90 perent, school dropout rate is 75 percent, average Indian family income is $1000, and 95 percent of reservation housing is substandard.

For taking their stand against these conditions at Wounded Knee, 300 people face federal, state, and tribal charges. Still another kind of massacre could take place in 1974; this time in the courts.