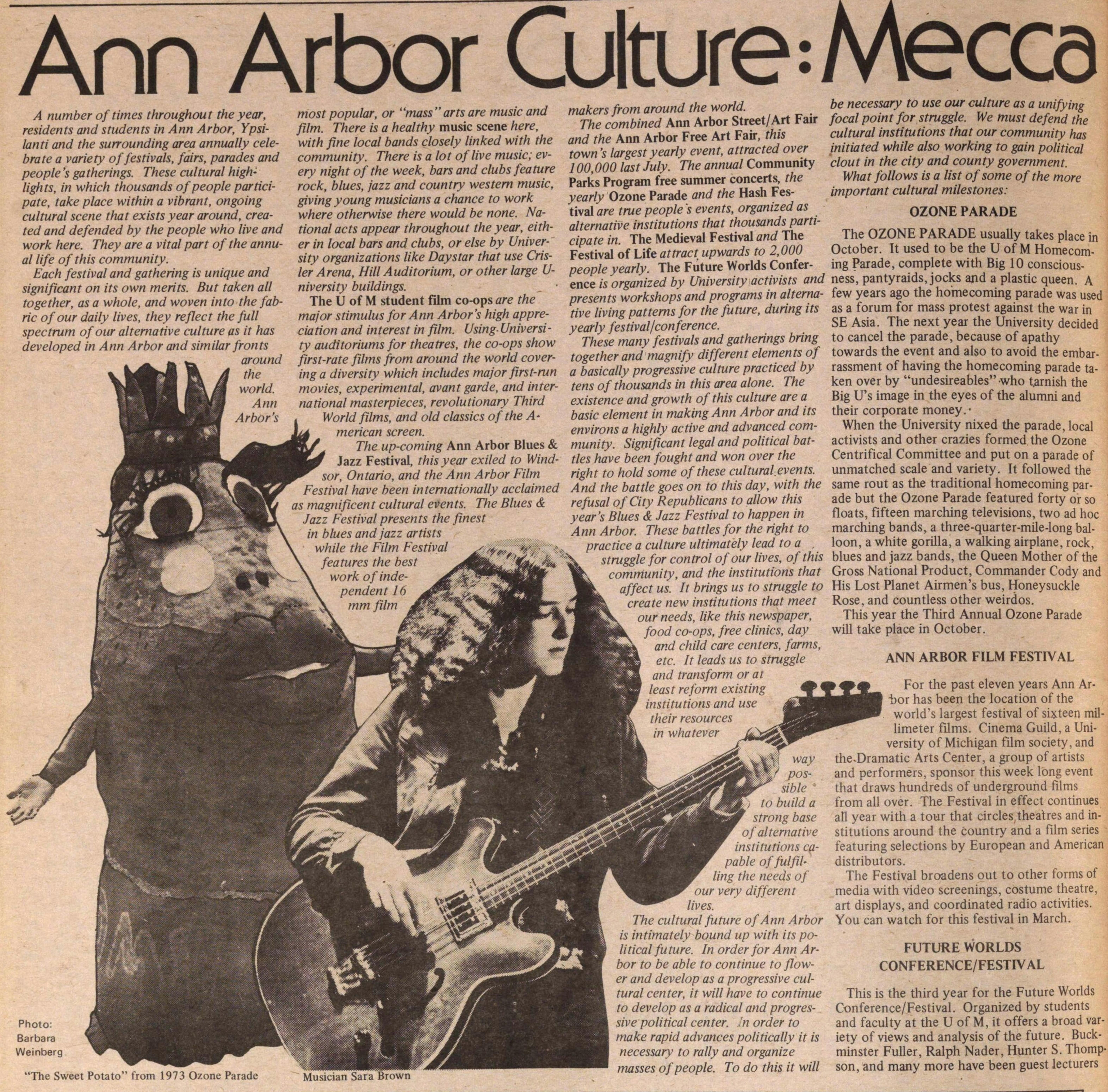 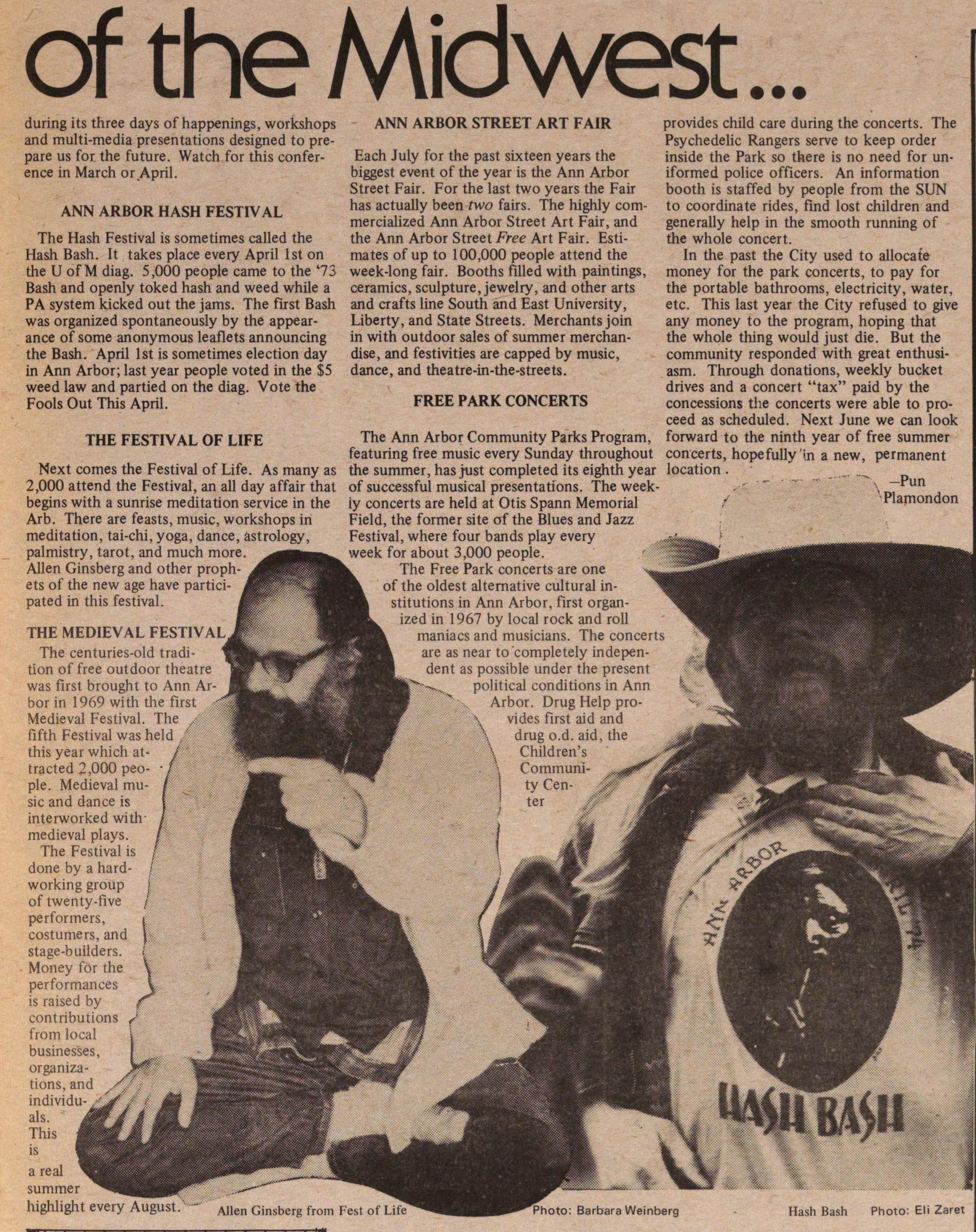 A number of times throughout the year, residents and students in Ann Arbor, Ypsilanti and the surrounding area annually celebrate a variety of festivals, fairs, parades and people's gatherings. These cultural highlights, in which thousands of people participate, take place within a vibrant, ongoing cultural scene that exists year around, created and defended by the people who live and work here. They are a vital part of the annual life of this community.

Each festival and gathering is unique and significant on its own merits. But taken all together, as a whole, and woven into the fabric of our daily lives, they reflect the full spectrum of our alternative culture as it has developed in Ann Arbor and similar fronts around the world.

Ann Arbor's most popular, or "mass" arts are music and film. There is a healthy music scene here, with fine local bands closely linked with the community. There is a lot of live music; every night of the week, bars and clubs feature rock, blues, jazz and country western music, giving young musicians a chance to work where otherwise there would be none. National acts appear throughout the year, either in local bars and clubs, or else by University organizations like Daystar that use CrisIer Arena, Hill Auditorium, or other large University buildings.

The U of M student film co-ops are the major stimulus for Ann Arbor's high appreciation and interest in film. Using University auditoriums for theatres, the co-ops show first-rate films from around the world covering a diversity which includes major first-run movies, experimental, avant garde, and international masterpieces, revolutionary Third World films, and old classics of the American screen.

The combined Ann Arbor Street/Art Fair and the Ann Arbor Free Art Fair, this town's largest yearly event, attracted over 100,000 last July. The annual Community Parks Program free summer concerts, the yearly Ozone Parade and the Hash Festival are true people's events, organized as alternative institutions that thousands participate in. The Medieval Festival and The Festival of Life attract upwards to 2,000 people yearly. The Future Worlds Conference is organized by University activists and presents workshops and programs in alternative living patterns for the future, during its yearly festival conference.

These many festivals and gatherings bring together and magnify different elements of a basically progressive culture practiced by tens of thousands in this area alone. The existence and growth of this culture are a basic element in making Ann Arbor and its environs a highly active and advanced community. Significant legal and political battles have been fought and won over the right to hold some of these cultural events. And the battle goes on to this day, with the refusal of City Republicans to allow this year's Blues & Jazz Festival to happen in Ann Arbor. These battles for the right to practice a culture ultimately lead to a struggle for control of our lives, of this community, and the institutions that affect us. It brings us to struggle to create new institutions that meet our needs, like this newspaper, food co-ops, free clinics, day and child care centers, farms, I etc. It leads us to struggle and transform or at least reform existing institutions and use their resources in whatever way possible to build a strong base of alternative institutions capable of fulfilling the needs of our very different lives.

The cultural future of Arm Arbor is intimately bound up with its political future. In order for Ann Arbor to be able to continue to flower and develop as a progressive cultural center, it will have to continue to develop as a radical and progressive political center. In order to make rapid advances politically it is necessary to rally and organize masses of people. To do this it will be necessary to use our culture as a unifying focal point for struggle. We must defend the cultural institutions that our community has initiated while also working to gain political clout in the city and county government.

What follows is a list of some of the more important cultural milestones:

The OZONE PARADE usually takes place in October. It used to be the U of M Homecoming Parade, complete with Big 10 consciousness, pantyraids, jocks and a plastic queen. A few years ago the homecoming parade was used as a forum for mass protest against the war in SE Asia. The next year the University decided to cancel the parade, because of apathy towards the event and also to avoid the embarrassment of having the homecoming parade taken over by "undesireables" who tarnish the Big U's image in the eyes of the alumni and their corporate money.

When the University nixed the parade, local activists and other crazies formed the Ozone Centrifical Committee and put on a parade of unmatched scale and variety. It followed the same rout as the traditional homecoming parade but the Ozone Parade featured forty or so floats, fifteen marching televisions, two ad hoc marching bands, a three-quarter-mile-long balloon, a white gorilla, a walking airplane, rock, blues and jazz bands, the Queen Mother of the Gross National Product, Commander Cody and His Lost Planet Airmen's bus, Honeysuckle Rose, and countless other weirdos.

This year the Third Annual Ozone Parade will take place in October.

For the past eleven years Ann Arbor has been the location of the world's largest festival of sixteen millimeter films. Cinema Guild, a University of Michigan film society, and the Dramatic Arts Center, a group of artists and performers, sponsor this week long event that draws hundreds of underground films from all over. The Festival in effect continues all year with a tour that circles theatres and institutions around the country and a film series featuring selections by European and American distributors.

The Festival broadens out to other forms of media with video screenings, costume theatre, art displays, and coordinated radio activities. You can watch for this festival in March.

This is the third year for the Future Worlds Conference/Festival. Organized by students and faculty at the U of M, it offers a broad variety of views and analysis of the future. Buckminster Fuller, Ralph Nader, Hunter S. Thompson, and many more have been guest lecturers during its three days of happenings, workshops and multi-media presentations designed to prepare us for the future. Watch for this conference in March or April.

The Hash Festival is sometimes called the Hash Bash. It takes place every April 1st on the U of M diag. 5,000 people came to the '73 Bash and openly toked hash and weed while a PA system kicked out the jams. The first Bash was organized spontaneously by the appearance of some anonymous leaflets announcing the Bash. April 1st is sometimes election day in Ann Arbor; last year people voted in the $5 weed law and partied on the diag. Vote the Fools Out This April.

THE FESTIVAL OF LIFE

Next comes the Festival of Life. As many as 2,000 attend the Festival, an all day affair that begins with a sunrise meditation service in the Arb. There are feasts, music, workshops in meditation, tai-chi, yoga, dance, astrology, palmistry, tarot, and much more Allen Ginsberg and other prophets of the new age have participated in this festival.

The centuries-old tradition of free outdoor theatre was first brought to Ann Arbor in 1969 with the first Medieval Festival. The fifth Festival was held this year which attracted 2,000 people. Medieval music and dance is interworked with medieval plays.

The Festival is done by a hardworking group of twenty-five performers, costumers, and stage-builders. Money for the performances is raised by contributions from local businesses, organizations, and individuals. This is a real summer highlight every August.

Each July for the past sixteen years the biggest event of the year is the Ann Arbor Street Fair. For the last two years the Fair has actually been two fairs. The highly commercialized Ann Arbor Street Art Fair, and the Ann Arbor Street Free Art Fair. Estimates of up to 100,000 people attend the week-long fair. Booths filled with paintings, ceramics, sculpture, jewelry, and other arts and crafts line South and East University, Liberty, and State Streets. Merchants join in with outdoor sales of summer merchandise, and festivities are capped by music, dance, and theatre-in-the-streets.

The Ann Arbor Community Parks Program, featuring free music every Sunday throughout the summer, has just completed its eighth year of successful musical presentations. The weekly concerts are held at Otis Spann Memorial Field, the former site of the Blues and Jazz Festival, where four bands play every week for about 3,000 people.

The Free Park concerts are one of the oldest alternative cultural institutions in Ann Arbor, first organized in 1967 by local rock and roll maniacs and musicians. The concerts are as near to completely independent as possible under the present political conditions in Ann Arbor. Drug Help provides first aid and drug o.d. aid, the Children's Community Center provides child care during the concerts. The Psychedelic Rangers serve to keep order inside the Park so there is no need for uniformed police officers. An information booth is staffed by people from the SUN to coordinate rides, find lost children and generally help in the smooth running of the whole concert.

In the past the City used to allocate money for the park concerts, to pay for the portable bathrooms, electricity, water, etc. This last year the City refused to give any money to the program, hoping that the whole thing would just die. But the community responded with great enthusiasm. Through donations, weekly bucket drives and a concert "tax" paid by the concessions the concerts were able to proceed as scheduled. Next June we can look forward to the ninth year of free summer concerts, hopefully in a new, permanent location.

"The Sweet Potato" from 1973 Ozone Parade

Allen Ginsberg from Fest of Life