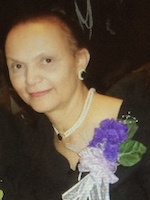 Dolores Preston Turner was born in Ann Arbor in the early 1940s, and her family lived in a small historically Black neighborhood on Woodlawn Avenue. She graduated from Ann Arbor High School, where she met her future husband, James Turner. She remembers moving into their first apartment in Pittsfield Village as a result of fair housing protests in Ann Arbor in the 1960s. Turner has two master’s degrees and she taught English at Huron High School for 30 years. Dolores and James celebrated their 60th wedding anniversary in September 2021.

James Turner was born in Ann Arbor in 1939. He played football and track and was president of his sophomore, junior, and senior class at Ann Arbor High School. He married his high school sweetheart, Dolores, after she graduated a few years later. Turner went on to get his master’s degree and taught at Highland Park High School and Ann Arbor Public Schools for 32 years. He is a member of the usher board and a trustee at Bethel A.M.E. Church. James and Dolores celebrated their 60th wedding anniversary in September 2021.