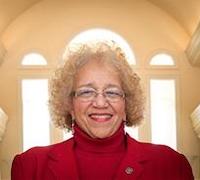 Lois Allen-Richardson was born in 1942 in Ypsilanti, where she remembers attending Harriet Street School and spending time at Parkridge Center. As a young adult, she worked briefly at Goodman’s Fashion Center in the heart of Ypsilanti’s Black business district. Allen-Richardson is an ordained minister and served as a missionary in Haiti and Trinidad. Since 2000 she has been a member of the Ypsilanti City Council, where she has been a strong advocate for the city’s south side. In June 2020, she became Ypsilanti’s first Black woman mayor after the resignation of her predecessor