Between 1875 and 1945, the city was home to seventeen proprietary hospitals. Ann Arborites could go to Dr. Cowie for a difficult diagnosis, study nursing with Dr. Peterson, get cuts stitched by Dr. Gates, and have their babies in Nurse Grove’s home. When Dr. Carl Malcolm Jr. started practicing in Ann Arbor in the 1930's, many patients still expected him to treat them at home. When he urged them to go to the hospital, Malcolm recalls, "they thought it was the end of things." Malcolm's older patients had been born in a time when anything a doctor could do to help he could do in their homes. As recently as the mid-1800s, hospitals were charity institutions for those who had no home to be sick in—"refuges mainly for the homeless poor and insane," according to Paul Starr's The Social Transformation of American Medicine. 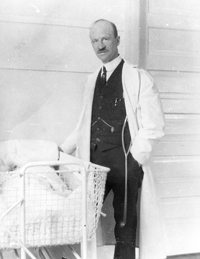 Dr. David Cowie is best remembered today as the instigator of adding iodine to salt to prevent goiters.

Starr's fascinating medical history explains how, "in a matter of decades, roughly between 1870 and 1910, hospitals moved from the periphery to the center of medical education and medical practice." A string of breakthroughs, including antisepsis, anesthesia, and X-rays, transformed surgery from a desperate last resort into a routine medical tool. At first, doctors performed surgery in people's homes--Elsa Goetz Ordway remembers the family physician operating on her mother on the dining room table in 1914. But as medical standards rose, more and more doctors preferred to work in hospitals, which gradually evolved from shelters for the poor and the dying into, in Starr's words, "doctors' workshops for all types and classes of patients." Today, Ann Arbor's three huge hospitals--the U-M, St. Joe's, and the VA--together handle more than a million patient visits every year. But it took a long time to get there. Both the University of Michigan Hospital (1869) and St. Joseph Mercy Hospital (1911) started out serving mere handfuls of patients in converted homes. For two generations, they shared the town with numerous small hospitals owned by individual practitioners. Between 1875 and 1945, Ann Arbor had at least seventeen "proprietary" hospitals. All were located in converted houses. Otherwise, they were as different as the personalities and medical specialties of their owners. The hospitals' owners included some of the most distinguished physicians in the city. Dr. David Murray Cowie founded the U-M pediatrics department, cared for patients at the U-M Hospital, and engaged in extensive research while also running his own hospital in a former mansion on South Division Street. His colleague Dr. Reuben Peterson, U-M professor of "women's and children's diseases," established a private medical complex that eventually filled ten buildings on Forest, Church, and South University. At the other end of the spectrum, nurse Josephine Grove took patients into her own home on Huron near Revena, caring for them around the clock. And Neil Gates, a down-to-earth general practitioner, attempted to treat almost every kind of medical ailment, whether in a patient's home, in his downtown office, or in his hospital on South Fifth Avenue. Dr. Cowie's exclusive clientele Dr. David Cowie's sprawling brick mansion at 320 South Division is by far the most impressive surviving former hospital. In its day, it was also the most prestigious. Cowie was born in Canada in 1872 to Scottish parents (his obituary called him "as Scotch as MacGregor"). He came to Michigan in 1892 to attend Battle Creek College but soon transferred to the U-M, where he graduated from the medical school and was hired as an assistant in internal medicine in 1896. He earned a second medical degree at the University of Heidelberg in 1908, the year he married Anna Marion Cook, who was also a doctor, although there is no evidence that she ever practiced medicine. When Cowie returned from Germany, he was asked by medical dean George Dock to start a pediatrics department at the U-M Hospital. He opened his private diagnostic hospital a few years later, starting out with four rooms on the second floor at 122 North Fourth Avenue. In 1918, Cowie tripled the number of patients he could serve by buying the home at 320 South Division built in the mid-1880s for Adelbert Noble, proprietor of the Star Clothing House. Cowie added on an institutional dining room and kitchen to the back of the house and built a third floor for additional patient rooms. Set up to provide complete medical and surgical services, the hospital boasted an automatic elevator, and every room had running water. The nurses wore pink uniforms. Edith Staebler Kempf, whose in-laws lived next door in what is now the Kempf House Center for Local History, remembered Cowie Private Hospital as "a hospital for rich women." But according to the Medical History of Michigan, published in 1930 by the Michigan State Medical Society, some exceptions were made. The authors wrote of Cowie's "ministration to semi-indigent gentlefolk" as "a pleasant feature" of the hospital. Retired surgeon Thurston Thieme sometimes assisted with operations at Cowie's as a U-M intern. He agrees with Kempf about the high-toned clientele. He remembers setting out the sterilized instruments for Dr. Frederick Coller, the distinguished chairman of surgery at the U-M, while Coller complained that the patient should have come to the U-M Hospital for the operation. But according to Thieme,"Cowie had the best families as patients. He got the necessary doctors to come in." Cowie attracted patients from all around the state. Dr. Allen Saunders, a local pediatrician who grew up in Coldwater, remembers that a number of relatives and family friends chose to come to Cowie's in Ann Arbor rather than be treated locally. Cowie's prominent patients included Francis Kelsey, U-M professor of Latin and director of Near East research. Kelsey, for whom the Kelsey Museum was named, was a friend and admirer of Cowie's. In a 1924 letter to philanthropist Horace Rackham, who underwrote his archaeological work, Kelsey wrote that his wife, Isabelle was sick but was receiving expert care from Cowie: "I have a friend who is a scientific physician in charge of a private hospital where obscure cases of her sort are investigated. She is there now and her case is being studied with the help of the X-ray and other means of diagnosis." It is not known what Cowie found, but Isabelle Kelsey lived another twenty years, to the age of eighty-two. Francis Kelsey was not so lucky. In 1927, he returned from a dig in Egypt in failing health and immediately checked into Cowie's hospital. Too weak to give the paper on his findings that he had come home expressly to deliver, he got out of his sick bed to go to the meeting and hear someone else read it for him. He came back to the hospital and died a few weeks later. 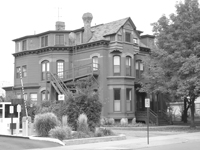 [Photo caption from book]: Dr. Rueben Peterson, standing by his wife’s roses, ran a hospital for women and children that also served as a nurse’s training school.

[Photo caption from book]: Dr. Neil Gates ran the city's last private hospital at 314 S. Fifth. Unable to keep up with advances at public hospitals, it closed after his death in 1945 and was torn down in 1973.