It launched the U-M on the path to greatness

“How can we truly be called a nation, if we cannot possess within ourselves the sources of a literary, scientific, and artistic life?” asked Henry Philip Tappan, the first president of the University of Michigan, at his inaugural address in 1852. Henry N. Walker, a prominent Detroit lawyer in the audience, was inspired by Tappan’s vision and asked what he could do to help. Tappan suggested he raise money to build an astronomical observatory.

Born into a prominent New York family, Tappan had astonished his friends by agreeing, at age forty-seven, to head what was then an obscure frontier college. The attraction for Tappan, who previously had been a minister, professor, and writer, was the chance Michigan offered to put his educational philosophy into practice—“to change the wilderness into fruitful fields,” as he put it in his inaugural address.

An adherent of the Prussian model of education, Tappan believed that universities should expand their curriculum beyond the classics to teach science and encourage research. An observatory would embody the new approach perfectly—and Walker was ideally positioned to make it a reality.

Walker was a former state attorney general who often handled railroad cases. Well connected to both intellectuals and business people in Detroit, he attracted contributors who desired to advance scientific knowledge, as well as those who were interested in astronomy’s practical uses, particularly in establishing accurate time.

The earliest known picture of the Observatory, circa 1858. The man is probably first director Franz Brunnow with his father-in-law’s dog, Leo.

Because Walker raised most of its $22,000 cost from Detroiters, the building was named the “Detroit Observatory.” Tappan originally planned to have just one telescope, a refractor, suitable for research and instruction. But Walker offered to pay for a meridian-circle telescope as well. It would be better suited for measuring the transit of the stars and thus for establishing more accurate time—a matter of vital importance to railroads, which needed to run on schedule.

The regents sited the observatory on a four-acre lot, high on a hill outside the city limits. Although only half a mile east of Central Campus, it was then considered way out in the country. In the early days it could be reached only by a footpath, and astronomers complained of the long walk.

Tappan said later that he took credit for everything about the observatory except its location, which he would have preferred be on the main campus. “It has proved an inconvenient location, and has caused much fatigue to the astronomer,” he wrote. However, the remote site probably saved it: nearly every building of its age on Central Campus has long since been torn down.

In 1853, Tappan and Walker traveled to New York to order the refracting telescope from Henry Fitz, the country’s leading telescope maker. With an objective lens twelve and five-eighths inches across, it would be the largest refractor yet built in the United States, and the third largest telescope in the world, after instruments in Pulkovo, Russia, and at Harvard.

Tappan asked several American astronomers to head the new observatory, but they all turned him down. At that point he thought of Franz Brunnow, Encke’s assistant, who had been very enthusiastic about the project. Some objected to hiring a foreigner as astronomer, but Tappan prevailed. And certainly Brunnow was eminently qualified--he was the first Ph.D. on the U-M faculty. Under his direction, Ann Arbor soon became “the place to study astronomy,” according to Patricia Whitesell, the observatory director, curator, and author of A Creation of His Own: Tappan’s Detroit Observatory. Brunnow socialized with the Tappans and in 1857 married Tappan’s daughter Rebecca.

Tappan launched many other initiatives to turn the U-M into a first-rate university. He moved the students out of the two classroom buildings, letting them board in town, to make more space for academic uses--classrooms, natural history and art museums, and library. He encouraged the growth of the medical school, started the law school, and built the first chemistry laboratory in the country to be used exclusively for research and teaching. Under his leadership, the U-M granted its first bachelor of science degrees in 1855, its first graduate degrees in 1859, and its first civil engineering degrees in 1860.

But Tappan also made enemies--people who found his changes too precipitous or his manner too haughty. In 1863, Tappan was fired in a surprise vote by a lame-duck board of regents. Tappan moved his family to Europe, never to return; he died in Switzerland in 1881. Fortunately, his successors continued on the course he’d set, securing the U-M’s reputation as one of the nation’s leading universities.

Brunnow resigned after Tappan was fired; his star student, James Craig Watson, succeeded him. During Watson’s tenure, a director’s house was built west of the observatory. 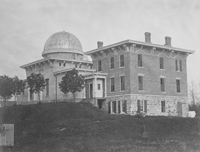 The Observatory with the director’s house on the west side. While Brunnow was able to live in the president’s house, Watson, the next director, needed a home, so one was built that connected to his office in the Observatory.

In 1908 an addition was built to the east to hold a thirty-seven-inch reflector telescope. But as the campus grew out to the observatory, lights from the power plant (1914) and from the Ann Street hospital and Couzens Hall (both 1925) interfered with viewing. Over the decades that followed, the astronomy department transferred its serious research to a series of increasingly remote locations (currently Arizona and Chile). But the old observatory continued to be used for educational purposes until 1963, when the Dennison physics and astronomy building was completed.

In the tight-budget 1970s, there was talk of bulldozing the observatory. After World War II, the director’s house had been torn down to make room for an expansion of Couzens Hall, and the 1908 addition was razed in 1976, when the university decided it was too run down to maintain. But the original observatory was saved—though the rescue took a three-part campaign lasting close to thirty years.

Step one took place in the early 1970s, when a group of local preservationists led by John Hathaway, then chair of the Historic District Commission, and Dr. Hazel Losh, legendary U-M astronomy professor, convinced the university to give it a stay of execution.

Next, enter history professors Nick and Peg Steneck, who were called in by Al Hiltner, then chair of the astronomy department, and Orren Mohler, the former chair. Peg Steneck remembers that on her first tour of the building, “squatters were gaining access by climbing the chestnut tree out front and entering through the trapdoor in the roof. Evidence of occupancy, such as mattresses and Kentucky Fried Chicken boxes, littered the dome room, and a mural was painted around the wall of the dome.”

Nick Steneck tried to keep the building in use, setting up his office there, teaching classes, and using the upper level for the Collegiate Institute for Values in Science. Peg Steneck started research on the observatory’s history, which grew into a course she still teaches on the history of the university. Under the Stenecks’ prodding, the university took steps to stop the deterioration, fixing the roof, masonry foundation, and stucco.

Step three took place in 1994, when the university history and traditions committee asked vice president for research Homer Neal to restore the observatory. Neal assigned Whitesell, who was working in his office, to write a proposal, which she happily did, starting with Peg Steneck’s research.

Whitesell had a Ph.D. in higher education, was interested in both historic preservation and the history of science, and had long admired the observatory. Her new assignment, she says, “was a dream come true.” Neal agreed to the restoration and appointed Whitesell project manager.

Like the original construction, the million-dollar project, spearheaded enthusiastically by Anne and Jim Duderstadt, was paid for by gifts from private donors. The work began in June 1997 and was completed a year and a half later.
The university’s first total restoration project, the observatory has a lot of “first” and “only” distinctions. It is the oldest unaltered observatory in America that has its original instruments intact, in their original mounts, and operational. The meridian-circle telescope is the oldest in its original mount in the entire world. The building is the second oldest on campus (next to the president’s house) and the oldest unaltered one.

Restored, the observatory serves both as a museum of astronomical history and as a location for many academic events.