At one time or another early in this century, all six children of Detroit physician Richard Inglis lived in Ann Arbor. An interesting bunch, they included Agnes, the first curator of the U-M's Labadie collection of social protest literature; Frank, a Detroit pharmacist; David, a pioneer neurologist; Will, a Detroit businessman; and Kate, who owned a fruit and chicken farm that stretched all the way from Geddes Avenue to the Huron River.

But the sibling who left the most imposing legacy was James, a wealthy industrialist. He and his wife, Elizabeth, built Inglis House, an elegant English-style mansion that since 1951 has been owned by the U-M. The university uses it to house and entertain its many visiting dignitaries in suitable style. During her fourteen-year tenure, former facilities coordinator Sandra Simms amassed a collection of thank-you notes extending from former president Gerald Ford and his wife, Betty, to the exiled Tibetan religious leader the Dalai Lama. (An aide wrote to say that "His Holiness very much enjoyed His stay.")

The Inglises built the secluded mansion, which occupies an 8.5-acre plot at 2301 Highland Road, as a retirement home. Its formal, traditional style belies the mundane business that paid for it. 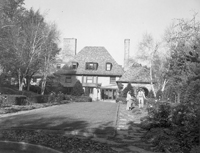 The Inglis’ stately home, designed by local architect Woody Woodburn to resemble a French Chateau, has hosted visitors ranging from Gerald and Betty Ford to the Dalai Lama.

James Inglis was ten when his father died. The family was left a legacy of $3,000 a year from real estate holdings, enough to live comfortably at that time, but James left school at age fourteen. According to family legend, it was because his mother wouldn't give him enough money to get his hair cut as often as he liked. Starting out as an office boy at $2.50 a week, Inglis advanced to become owner of American Blower Co., where he developed fans for cooling Detroit's burgeoning auto factories. The company was immensely successful and respected — so much so that during the Depression, the National Bank of Detroit asked Inglis to serve on its board to help raise public confidence in the institution.

In 1903, when he was thirty-nine, Inglis married Elizabeth Hughes, a Presbyterian minister's daughter fourteen years his junior. They moved to Ann Arbor about 1918, living originally on Baldwin Street.

They had become familiar with the town during frequent visits to Inglis's sister Kate, who had moved to the farm on Geddes with her husband, Frank Smith, in 1901. The Smiths' big white farmhouse still stands, looking much the same, at 2105 Geddes, near Concord. During the city's building boom in the 1920's, the Smiths started subdividing the farm into residential lots on what are now Highland, Concord, Lenawee, and Lafayette streets. James Inglis saved his sister the job of platting the bottom of her farm by buying the land that ran down to the river as a site for his dream home.

Architect Lilburn "Woody" Woodworth designed an English-style house of stones and irregular bricks, with a slate roof and elegant accoutrements. Though large (twelve rooms on four levels), it worked well as a family home. Inglis's niece, travel writer Carol Spicer (daughter of brother Will), remembers the house as the natural gathering place for the extended family. She recalls "lots of jokes and laughter in the house."

The gardens, designed by Elizabeth Inglis, were also quintessentially English, with a formal garden, a cutting garden, a meadow, an orchard, and wildflower areas. The grounds also included a tennis court and a three-hole golf course and even, at one time, peacocks. (They eventually had to be banished because of their noise.)

James Inglis died in 1950, leaving the house to his wife for her lifetime and then to the university. But Elizabeth Inglis did not wait that long. She gave the house to the U-M less than a year later when she moved to Kalamazoo to be with her daughter.

Elizabeth and James Inglis (top center) with their children and grandchildren sit under the wisteria covered arches at the back of their house in 1945.

The new U-M president, Harlan Hatcher — like all incoming university presidents since — was given the choice of living in Inglis House or in the president's house on South University. In a 1982 seminar on the evolving role of the president's wife (published by the Bentley Library), Hatcher's wife, Anne, recalled thinking that "in many ways, it would have been nice, for the children particularly, to be in a neighborhood rather than in the middle of a campus with no little kids around to play with. But we really felt that it was important to maintain the central location."

Inglis House stood empty until 1964, when the university decided to use it as a guest home for important visitors and out-of-town regents. They refurbished it, filling it with a mixture of modern, traditional, and French Provincial furniture and hanging some original paintings by Courbet and Turner borrowed from the U-M art museum.

It took horticulturist Chuck Jenkins five years to restore the gardens to their former glory after fourteen years of neglect. He says he "got a good sense for the major elements" by looking at pictures and talking to Walter Stampflei, the Inglis's gardener, who still lived in the gatehouse; he also corresponded through a third party with Elizabeth Inglis, who lived until 1974.

Inglis House can accommodate forty people at a formal dinner and more for a reception or meeting. The Inglis family's unusual combination living room/dining room now serves well as a big dining room. Guests easily make do without a living room by beginning their evenings in the paneled downstairs library with hors d'oeuvre and cocktails. Carol Spicer, speaking of the house's present use, says, "If my aunt and uncle came back, they would be pleased."