Michigan captured in its infancy The U-M’s Clements Library recently received a very rare 1825 map: one of the few remaining copies of Orange Risdon’s map of southeast Michigan. “It is the first map of Michigan that shows serious surveying and settlement,” explains Brian Leigh Dunnigan, the library’s curator of maps. Risdon, best known in this area as the founder of Saline, is also famous in Michigan history as the chief surveyor of the Detroit-Chicago Road, now US-12. Though Risdon’s surveys were done under government contract, the map was a private venture. Risdon drew it himself and paid to have it published, planning to sell copies to pioneers trying to pick out places to settle. Unfortunately for him, a former employee came out with a competing map and grabbed most of the market. But though it failed to make its creator rich, Risdon’s map today gives us a wealth of information about what our area looked like just one year after Ann Arbor was founded. 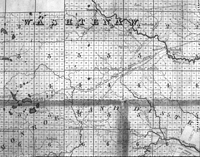 Map of the Surveyed Part of the Territory of Michigan, 1825.