The oldest known Ann Arbor photograph, this daguerreotype shows the staff of the Michigan Argus, the city’s Democratic weekly newspaper, circa 1850. Editor and publisher L. W. Cole (he was always referred to by his initials, even in his obituary) is in the center of the picture in black suit and top hat, surrounded by his youthful staff in rolled-up shirtsleeves.

When Cole came to Ann Arbor in 1838, he got his first job at the Michigan Argus. By the time this photo was taken, he was the paper’s co-owner and had already survived several politically motivated takeover bids. 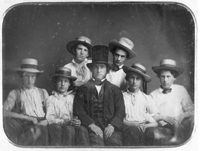 Argus staff still in their work clothes. Only the editor, L.W. Cole, dressed for the photo putting on his suit and tall hat, circa 1850.

In the nineteenth century, newspapers existed to support a party or position, and both ownership and readership could change quickly with the political winds. It was largely by chance that this particular moment from the city’s journalistic history happened to be immortalized by an itinerant photographer.

“Most daguerreotypes were pictures of a single person,” says Cynthia Read-Miller of the Henry Ford Museum, where the Argus photo was part of an exhibit of early photography. “This one is rare because it shows a group of people and even rarer because it shows an occupation.

“Practical photography began with the daguerreotype, a process that formed a single image rather than the negatives and prints that are familiar to us today,” explains Read-Miller. Invented by Frenchman Louis Daguerre in 1839, the daguerreotype was popular from that date through the 1850s, when it was displaced by the glass-negative ambrotype.

Ann Arborites could have daguerreotype photos taken as early as 1842, when Charles Rood set up a studio for a few days in the Bank of Washtenaw building, which now houses the Wooden Spoon bookstore, at the corner of Fourth Avenue and Ann. (Unfortunately, none of Rood’s photos appear to have survived.) The Cole photo very likely was taken by another itinerant daguerreotypist, A. M. Noble. An advertisement for Noble’s curiously named “Not London Daguerrean Gallery” appeared prominently on the top left-hand corner of the front page of the Argus on June 4 and June 18, 1851. Possibly the picture was part, or all, of the payment for the ad.

If Noble had chosen instead to advertise in the State Journal, an entirely different scene might have come down to us. While the Argus supported Democratic politicians, the State Journal backed the Whigs, the other major party at the time.

The State Journal was the descendant of Ann Arbor’s first paper, the Western Emigrant. Started by Thomas Simpson in 1829, just five years after Ann Arbor was founded, the Emigrant tried to be fair and evenhanded. Simpson wrote that “it shall be the constant aim of the Editor . . . to exhibit impartial information relative to the merit and qualifications of candidates for important public offices.” He also vowed that “the columns of the Emigrant shall, so long as under my direction, be open to a full investigation of Free Masonry and Anti-Masonry.” This last statement was too much for John Allen, cofounder of Ann Arbor (with Elisha Rumsey), and Samuel Dexter, founder of Dexter Village, and after five issues they purchased the paper and ran it with an editorial policy of anti-Masonry (they objected to the group’s secrecy) and endorsement of temperance. After several changes in name and ownership, the Emigrant became in December 1834 the Michigan Whig and in September 1835 the State Journal.

Two months after the Michigan Whig debuted, in February 1835, Earl P. Gardiner founded the Michigan Argus to give local Democrats a voice. Gardiner, who was born in Connecticut in 1807, settled in Michigan after serving in the army at Fort Gratiot, now Port Huron. Gardiner’s office was in Lower Town on the north side of the Broadway Bridge, above G. and J. Beckley’s dry goods and boot store (today St. Vincent de Paul).

Cole joined Gardiner three years later. Born in Palmyra, New York, in 1812, Cole was only twenty-six when he arrived in Ann Arbor. The 1881 History of Washtenaw County, Michigan says that Cole “learned the printing trade at an early age,” which must mean he had gone through an apprenticeship in New York. Samuel B. McCracken, editor of the State Journal from 1845 to 1855, described in an 1891 paper in the Michigan Pioneer and Historical Collections how these early apprenticeships worked:
“The printer’s apprentice usually boarded with his master and slept in a bunk in the office. He was required to do the office chores, to cut and carry the wood for the use of the office, and to carry the papers in town, and in many cases he was required to cut the wood and do other chores at the house also. If in addition to this he did what was expected of him in the way of legitimate office work, he underwent a discipline not without its results in the formation of character. The mental discipline necessarily connected with his calling, the opportunities for reading, if improved, were supposed to fit him for the editor’s chair.”

Main Street, circa 1861. Note the Argus Printing Press sign on the roof of the building on the corner of Main and Huron.

The next year, 1839, the Argus temporarily stopped publishing, and the Democratic Herald became the party’s mouthpiece. In 1843 the Argus resumed publication under the ownership of E. R. Powell and Orrin Arnold, with Gardiner again as editor. But internecine warfare between the left and right wings of the party kept the paper’s management in a state of flux for the next three years. McCracken, writing a short history of the press in the Local News and Advertiser, a paper he started in 1857, explained, “Powell and Arnold got on very well for a few months, but being but boys, they had a flare-up and Powell quit. The office passed through various hands, alternating between Cole and Arnold, Cole and Bennett, changing so often that it’s doubtful whether a process issued after banking hours on one day would have been good against the existing firm on the next.”

McCracken continued, “The original diversion of the Argus from the true faith was not relished by many of the influential members of the Democratic party . . . who went by the common name of ‘old hunkers.’ ”

The “old hunkers” did eventually win out. On January 28, 1846, Gardiner returned to power, this time with Cole, who had bought shares in the paper, as a partner. They wrote in their premiere issue: “In defiance of numerous obstacles we have been enabled to revive the Michigan Argus and with that name for our caption we again unfurl the Democratic banner.” They went on to state that they supported “measures of Reform which we may deem advantageous to the people,” but “oppose measures which may be ostensibly brought forward under the specious garb of Reform, but are really designed only for hobbies [hobby horses], upon which unprincipled demagogues may ride into popular favor and ultimately into power.”

Cole and Gardiner located the new incarnation of the Argus in the upper village, “a few rods north of the Exchange.” Early Ann Arbor pictures show the Argus in an upstairs office on the corner of Huron and Main. Subscriptions to the four-page weekly were “$1.50 per annum, if paid in advance, $2.00 if not paid within six months, $2.50 if not paid at the expiration of the year.”

The fortunes of the Argus rose and fell with the political tides. The big issue dividing Michigan Democrats at the time was the structure of the court system and the selection of judges. Supporters of change locally included not only young people but notables such as state senators John Allen (who had set aside his anti-Masonic views to join the Democratic Party in 1839) and Samuel Denton, an abolitionist physician active in local affairs. The Argus and most local circuit judges, including William Fletcher (1836–1842), George Miles (1846–1850), and Edward Mundy (1848–1851), opposed the shift. Only Alpheus Felch, a circuit court judge from 1842 to 1845 and then governor from 1846 to 1847, supported it.

Looking back on this period in a letter quoted in the 1881 county history, Cole wrote, “The new series of the Argus began at the time with judicial reform, when the present circuit court system was completely set aside. I called it a ‘Judicial Revolution,’ which it was; and the Argus from the first issue, fought it until it was wiped out and dead. I suffered some for the course I pursued, but I was amply rewarded for my firmness afterward. The thing that was established was no ‘reform’; it was a senseless revolution. It took some nerve, I confess, to stand the pressure brought to bear upon me, and for several months my subscription list only numbered about 50. To see about 80 of my own party marching to the polls under the banner of ‘reform,’ instigated by Dr. Denton and John Allen, and vote against Judge Felch and the Democratic ticket, gave me serious thoughts of the course I was about to take . . . but good counsel, such as Judges Mundy, Miles, Fletcher, Wilson and others, and my own sense of what should be done, determined me to go ahead, and I did, to the end of the foolish thing.”

The judicial dispute was largely resolved by the new state constitution of 1850, and the Democratic rift was mended--much to the benefit of the erstwhile outcasts. By 1854 Argus subscriptions had risen from a low of fifty to a robust 1,800.

Cole and Gardiner stayed with their middle-of-the-road Democratic politics, even opposing what were then seen as “radical” efforts to abolish slavery nationally. For “the stability of our happy Union,” they urged “the North to avoid all action and language in reference to slavery which will unnecessarily irritate the South.”

Slavery may seem an unusual subject for a small-town paper, but in fact most of the Argus was devoted to state and federal politics. Even foreign news was given more coverage than local events, which were barely noted; at that time, because the town was so small (population 4,500 in 1850), it was assumed that everyone knew what was happening locally.

After putting out the paper for eight and a half years, Cole and Gardiner sold it to Elihu Pond, best known today as the father of Irving and Allen Pond, the architects of the Michigan Union and Michigan League. Cole and Gardiner said little about the reasons for the change. Their parting editorial on June 29, 1854, said only, “Circumstances that need not be enumerated now indicate that the connection between ourselves and our patrons must be terminated.” They departed as they had arrived, as diehard Democrats: “Wishing prosperity to the party whose principles we have endeavored in a feeble manner to sustain and health and happiness to our numerous friends, we close this last set of public duties.”

Gardiner finished his career as a printer for the Ann Arbor Journal. He died in 1866. In the county history, Cole praised the partner “whose memory I shall always cherish with the kindliest feelings. . . He was the first to sign the Martha Washington [temperance] pledge in Ann Arbor, and so far as I know, he never in the least deviated from it. He died as he lived--an honest man, a Christian, and one of the best temperance men.”

Cole moved to Albion and established the Albion Mirror, which he published for the rest of his life, remaining a staunch Democrat. McCracken described Cole in 1891 as “one of the oldest newspaper men in the state actively engaged in the business.” Cole died three years later, in 1894, at age eighty-one, working until the end. According to his obituary, “his last editorial work [was] a few days before his last and fatal illness.”