Continuity and change on Liberty Street

John Haarer, one of Ann Arbor’s early photographers, showed that his artistry went beyond photography when he built an elegant brick storefront studio and home at 113 West Liberty. After surviving an attempt to tear it down for parking in the 1960s, the 1888 building is today home to the West Side Book Shop, with the upper stories a wonderful urban apartment.

Haarer was born in 1840 in Öschelbronn, in the German state of Württemberg. The son of a farmer, he was educated from ages eight to fourteen in the village school, where he “became thoroughly familiar with his native tongue and also quite adept in Latin,” according to his sketch in the 1891 county history. At age twenty-one he immigrated to Ann Arbor, where he worked as an agricultural laborer and then as a section hand on the railroad. In 1861 he opened a photography business on the third floor of Mack and Schmid’s store on the corner of Liberty and Main.

Ann Arbor’s first photos were taken by traveling daguerreotypists. Introduced from France about 1840, Louis Daguerre’s process produced a direct, mirrorlike image on a polished silver surface. Although these instant portraits had to be held in certain ways to be discernible and images were reversed, they quickly caught on all over the country. By 1846 Ann Arbor had its first resident photographer: an ad that year announced that “L. C. Goodale, having furnished himself with a supply of best Material, is now prepared to take Likenesses at his residence, corner of Catharine and Fifth street.” 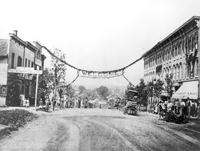 Haarer moved his studio to the modest frame building, left, in the mid-1870s. He replaced it in 1888 with the Romanesque structure that still exists.

Haarer started out making ambrotypes, a newer type of photograph that replaced daguerreotypes in the mid-1850s. Ambrotypes were easier to view than daguerreotypes and cheaper to make. Working with collodion, a newly developed base, spread on a piece of glass, the photographer produced an image that yielded a positive view when turned over and mounted on a black background. But like daguerreotypes, each ambrotype was unique and could not be reproduced.

The next step, which Haarer soon took, was to expose the glass plate longer and then use it as a negative to make paper prints. The photo still had to be taken when the collodion was wet, though, so the photographer had to stay close to the darkroom. That’s why most early photographs are studio poses. (To get his wonderful Civil War photos, Mathew Brady built a portable darkroom in a horse-drawn wagon.) Haarer had several backdrops that he could use to vary his shots. One extant picture, owned by the present occupants of the upstairs apartment, Bill Read and Tony Harris, shows palm trees in the background. Another one, owned by Carolyn and Joseph Arcure, owners and restorers of the apartment, has a woodland scene with trees and flowers.

Haarer took both carte-de-visite and cabinet photos. The carte-de-visite became popular after 1854, when a French photographer devised a multiple-lens camera that allowed a number of poses to be recorded on a single plate, thus reducing printing costs. These small individual pictures were mounted on stiff cards about four inches by two and a half and used as calling cards. People began collecting them and saving them in albums. Cabinet cards--larger mounted photographs, usually four inches by five and a half--were introduced in 1866. Both the Arcures’ photo and an early self-portrait of Haarer at the Bentley Library are cartes-de-visite; the one owned by Read and Harris, and another owned by Jay Platt, the owner of the West Side Book Shop, are cabinet cards.

Sometime in the mid-1870s Haarer moved his studio from Main Street to a two-story wooden building on Liberty midway between Main and Ashley. As was common at that time, he worked downstairs and lived upstairs. He married for the first time in 1871, but his wife died a year later. In 1875 he married Katherine Zimmer, a native of Canada, and they had seven children.

In 1888 Haarer built a beautiful new building to house both his business and his growing family. The story that has been passed down is that Haarer and Martin Noll, a shoe repairman, chipped in to buy a German lottery ticket and won. (Noll used his share to build the gorgeous Queen Anne house at 921 West Huron.)

Haarer moved his existing building onto another lot and then spared no expense on the new one. It was built in the Richardsonian Romanesque style, then much in vogue, with rounded arches above the windows, multicolored brick in ornate designs, and a front gable. Transom windows and fancy brass hardware were used both inside and out.

The upper two stories, which formed the family living quarters, included two parlors (one for everyday and one for important visitors), a kitchen, and a dining room on the second floor. An impressive marble-faced fireplace dominated the front parlor, which was separated from the rear parlor by pocket doors and beadboard. On the top floor a front master bedroom had room for a nursery; five smaller bedrooms were used by the older children. “I’m amazed they could raise so many kids there,” says Genevieve Haarer Vergari, the widow of the couple’s grandson Ernest. “The streets were dirt then. So was the alley. They turned kids loose. You couldn’t keep them cooped up--they had to go out and play ball. There were no cars, just horses and buggies.”

Haarer ran his business on the ground level, locating his studio and darkroom in the back with a reception area in front. His darkroom, now the restroom for the bookstore, still has amber transom lights. A door led to the staircase going up, so Haarer didn’t have to leave the building to get to the family quarters.

The new store was large enough that Haarer added books and stationery to his offerings, with German books a specialty--Platt found a window shade in the basement that reads “German Book Handler.” The books quickly became central to the business, as Haarer’s biographical sketch in the county history three years later indicates:

"There is nothing more fascinating to a love of ideas than a bookstore filled with the choice works of ancient and modern writers. Within their uncut pages are the treasures of all the ages. One of the most popular resorts in the city of Ann Arbor to the man or woman who loves books, is that of which Mr. Haarer is the proprietor, he having a fine book and stationery establishment in the college city of Michigan."

Haarer was wise to develop this second line of business to fall back on, because the year he moved into his new building, the Eastman Company introduced a dry film that could be put in a camera and used anytime. It freed the professional photographer from staying so close to the darkroom--and also launched the mass market for amateur photography. In 1888 Eastman began selling Kodak cameras that came with a 100-exposure roll of film inside. After the film was shot, the customer would send in the whole camera, and Eastman would develop the film and send it back with new film inside. Suddenly almost anyone who wanted to could take photographs.

By 1898 Haarer was still selling books but had given up photography. Instead, he had begun selling insurance--a business that would stay in the family for three generations.

Haarer died in 1916 at age seventy-five, five years after suffering a paralyzing stroke. Two of his sons took over the business--Julius handling the insurance sales and Ernest the bookstore. (Ernest was later joined by his son, also named Ernest.) Two other sons, George, a partner in a clothing store, and Oscar, a pharmacist with Eberbach and Son, also lived in town. Julius and Oscar never married and shared the former family quarters above the store for the rest of their lives. 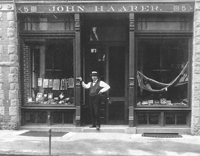 John Haarer posed proudly in late 1880s in front of his impressive new photography studio and bookstore on West Liberty.

Oscar may not have strayed as far from the family business as it appears; it is likely that he got interested in producing medicines by seeing his father mix photographic chemicals. He sold some of his own creations out of his brothers’ store. Platt found a blue bottle in the basement bearing a Haarer label, which appears to contain some type of liquid medicine. A box of tins of Wonder Salve was also found. According to the label it was quite a panacea, recommended to treat “burns, sores, cuts, eczema, piles, rheumatism, carbuncles, ulcers, and wounds.”

Leroy Ehnis recalls buying his schoolbooks in the 1920s and 1930s from Haarer’s. But the main business in the years that followed was insurance of all kinds. Ads say the Haarers sold fire, auto, and casualty insurance. Vergari recalls the setup in the days when her husband was involved. There were two desks in the front room, with Julius sitting closest to the door on the right, and Ernest, her husband, at a desk farther back. The back rooms were used for storage; display cases took up the rest of the front room. “Julius used to put sayings in the window, and people would stop and read and chuckle,” recalls Vergari. “I think he got them from an old book.”

In 1964 the city bought the building with the intention of tearing it down for a parking lot but gave Oscar and Julius permission to stay there for the rest of their lives. Julius died in 1966 and Oscar in 1967. By 1974 the city still had not torn down the building, so the Sesquicentennial Commission established its headquarters there (Ann Arbor, founded in 1824, turned 150 that year). After a year of events, displays, and meetings in the building, the city dropped the plan to demolish the building and sold it to Carolyn and Joseph Arcure.

The Arcures rented the downstairs to Jay Platt for his bookstore and began work on restoring the upstairs apartment for themselves. They brought back the fine features, still there but run down by years of neglect. They also made a few changes to open the place up more, creating a two-floor atrium by taking out the ceiling above the dining room, and a new master bedroom on the third floor by combining two of the small bedrooms.

By the time the Arcures did their restoration, the custom of store owners’ living above their businesses had been virtually forgotten. Upstairs space downtown was usually relegated to storage or sometimes offices. Proponents of a stronger downtown wanted to encourage renewed residential use of the area, arguing that it would make for a safer, more vibrant urban environment. Habits and regulations stood in the way, but downtown living finally caught on in the 1990s. Today the numbers of downtown apartments--and the prices people are willing to pay for them--have soared.

The Arcures recently moved to New Mexico and have rented their apartment to Read and Harris, who love the space and have made it their own with an entirely different look. The Arcures’ style was classic and elegant, but Read and Harris’s 1950s decor makes a pleasing contrast with the 1880s woodwork and other accoutrements.

Downstairs, Platt is equally enthusiastic about his space, appreciating its history and character. He hired artist John Copley to create a sign appropriate for the age of the building, and also to paint the name of the store on the window in a form that mirrors the architectural features of the building. In the back room where John Haarer had his studio, Doug Price now sells antique photographs.

[Photo caption from book]: More than a century later, the restored storefront is home to Jay Platt’s West Side Book Shop; in the back room, Doug Price sells antique photographs. “Courtesy Adrian Wylie”