It returned to German hands when it became part of Metzger's restaurant One German-American family followed in the footsteps of another when Metzger's German Restaurant expanded into 201 East Washington in 1991. The brick building with the eye-catching turret that overlooks the corner of Washington Street and Fourth Avenue was built in 1883 by butcher J. Fred Hoelzle. Hoelzle (1859-1943) came to Ann Arbor when he was seventeen and went to work for butcher John C. Gall at his store on East Washington where Austin Diamond is now. Hoelzle married a relative of Gall's named Alice and took over the business when Gall retired. In 1893 he moved down the street to the new building at Fourth Avenue and renamed his shop the Washington Market. A 1905 promotional booklet about Ann Arbor boasted that he "supplied the tables of Ann Arbor with the best meat that the world produces, makes the best sausage on the market, keeps poultry and fish in season, gives a clean cut and full weight, is impartial and obliging and has the confidence of the best citizens." Hoelzle advertised as a "dealer in fresh and salt meats, lard, sausage of all kinds." The salted meat he treated right on the premises. The sausage he also made himself, probably from authentic German recipes handed down from Gall. The fresh meat, brought in whole or in halves, was slaughtered in a space dedicated to this activity on the banks of the Huron River, east of the Broadway Bridge, and stored in big walk-in ice boxes behind the store. It took strong delivery men to lift the huge ice blocks, ranging from twenty-five to 300 pounds, into place almost at ceiling level.

Washington Street and Fourth Avenue in 1893.

When Hoelzle moved into his new building, his was just one of eighteen meat markets in downtown Ann Arbor. Without transportation or good home cooling, most people shopped daily for fresh meat, preferably at a store within easy walking distance of their homes or jobs. Saturday nights were especially busy, with farmers coming into town to stock up on supplies and townsfolk buying meat for their big Sunday dinners. Cal Foster, who as a teenager worked at Merchants' Delivery, a horse-drawn delivery service, remembers picking up orders from the Washington Market. They were packed in wooden crates--which he describes as "heavier than the devil"--and delivered to student rooming houses, sororities, and fraternities. Hoelzle sold his business in 1926, but continued to work at other meat markets as long as he was able. The building continued as a meat market under a succession of owners until the late 1940's. In the 1950's it was Sun Cleaners, then Martin's Gems and Minerals, and most recently, Harry's Army Surplus, until Metzger's expanded from next door in 1991. Metzger's was founded in 1928 and moved to 203 East Washington in 1936. Founders William Metzger and Christian Kuhn both grew up in the village of Wilhelmsdorf, in southern Germany. They left to escape the inflation that wracked Germany in the 1920's. At Metzger's father's bakery in Wilhelmsdorf, customers needed a bushel of money just to buy a loaf of bread. Metzger's first Ann Arbor job was at the bakery of his sponsor, Sam Heusel. (Heusel, the grandfather of radio personality Ted Heusel, sponsored most of the bakers who came during those years.) Metzger went on to work at the Michigan Union as a pastry chef (his pot washer was Bennie Oosterbaan). Meanwhile, Kuhn worked on a farm near Saline, then as a janitor at the U-M Hospital, and finally as a cook at Flautz's restaurant at 122 West Washington (recent home of the Del Rio). 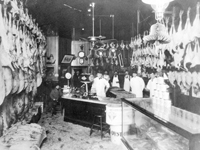 Fred Hoelzle's butcher shop on Christmas, 1909. The staff had worked all night cutting fresh meat for their customers' holiday celebrations.

When Kuhn's boss, Reinhart Flautz, decided to go back to Germany, Kuhn and his friend Metzger rented the space and started their own restaurant, the "German American." Kuhn was the cook and Metzger ran the dining room. The German American was right next door to the Old German restaurant, then still being run by founder Gottlob Schumacher. (Fritz Metzger, William's brother, bought it in 1946. A third brother, Gottfried, who also came over in the 1920s, ran the Deluxe Bakery, and, until he retired, made the dark pumpernickel bread served by both the Old German and Metzger's.) Business was booming when Kuhn and Metzger started in 1928, but a year later the Depression hit. To survive, the partners had to serve three meals a day, 364 days a year (they closed for Christmas). Metzger's wife, Marie, helped with waitressing, cleaning, cooking, and public relations. Their workday started at 6 a.m. and ended at midnight. Luckily, the Metzgers and Kuhn, a bachelor, lived above the restaurant at both its locations, so they could usually go upstairs midafternoon to take a nap. In 1936, Flautz returned to Ann Arbor and wanted to reopen his old place. Metzger and Kuhn moved two blocks down, to 203 East Washington, and reopened as "Metzger's German American." By 1937, the business was doing well enough that the family decided they could close on Sundays. When World War II came, they further decreased their hours, opening only for dinner because help was so hard to find. Food was also scarce, and meat was rationed. Even after the war, Walter Metzger, William's son, remembers people waiting to buy meat at the next-door butcher shop in a line that went all the way down to Huron Street. 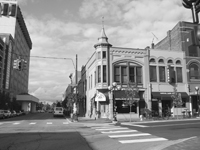 Washington Street and Fourth Avenue in 1993.

When Walter Metzger returned from World War II, he began working full-time at the restaurant. (He had started at age ten, washing dishes, cutting beans, peeling potatoes, and even pouring beer and wine at the bar.) In 1959, Kuhn and William Metzger retired, and Walter bought his father's share. Kuhn sold his share to his nephew, Fritz Kuenzle, who stayed until 1974. Walter's son, John, joined in 1975, becoming sole owner in 1986. Walter, although retired, still helps out a lot. It was John who arranged for the expansion next door into the old meat market. His goal was twofold: to preserve the historical appearance of the building and to make the two parts work together. He redid the outside to match old photographs, while inside he continued the decorating scheme of steins and other German memorabilia from the original restaurant. The most dramatic change, at least to passersby, is the cow weather vane on the turret. In Hoelzle's day, a cow weather vane proudly indicated what he sold, but it had long ago disappeared. John and Walter Metzger had been looking for a replacement for some time when relatives found a perfect one in Boston and gave it to them to celebrate the opening of the expanded restaurant. In 1999 Metzgers closed in Ann Arbor and later reopened in Scio township, thus continuing the family tradition another generation. Their Washington Street store has been used for several different restaurants, but one thing has remained; the cow is still on the roof demonstrating the history of the first two occupants.

[Photo caption from book]: Post World War II students enjoying a night out at Metzer’s. Note the formality of their dress. “Courtesy of Walter Metzger”