An auto heir's vision of the rural good life, it was a social success but a financial flop

Three miles south of Saline, on Milkey Road, a series of boarded-up houses and deserted farm buildings mark the site that from 1932 to 1953 was Saline Valley Farms. "No Trespassing" signs on trees and fences bar visitors from what was once a busy cooperative farm.

Saline Valley Farms was the brainchild of Harold Gray, "a rich man with rich ideas," according to former resident Ruth Hagen. Gray's grandfather was a practical lawyer who made a fortune as the first president of Ford Motor Company. Harold, on the other hand, was a pacifist and economic dreamer who decided to use his large inheritance to try an alternative method of farming. In interviews at the time, Gray said his idea was to show that by combining agriculture with on-site canning and marketing activities, "a group of people living on the land and working in close cooperation could achieve a standard of living and a degree of security above that of the average farm family." 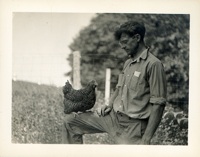 Gray developed his ideas of agricultural economy while studying economics at Harvard (he earned a B.A. and an M.A. and did further graduate work) and as a missionary in China. In the early days of the Depression, he decided to try to put his ideas of farming into action, and after a year of searching found an abandoned 596-acre farm that met his purposes: rural enough for low taxes but near to markets and also to the cultural advantages of Ann Arbor.

Gray's first recruit was Harold Vaughn. Vaughn, a former county extension agent who had retrained as a social worker, became the farm manager. "We arrived on barely passable roads," Vaughn later wrote of his first day, April 4, 1932. "The old farm house and west barn stood empty. Loose doors banged noisily in the wind. The furnace was broken, the water system didn't work and the electricity was off."

Together, Gray and Vaughn found people, eventually twenty families, to move to the farm and turn it into a working operation.

With a lot of work, plus a massive infusion of Gray's capital, the farm was soon transformed: roads built, a lake formed by damming the creek that ran through the property, fields laid out, and orchards planted. Houses for the workers were built with the occupants in mind and varied depending on the size of the family. 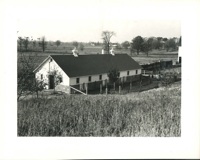 The first ones were dubbed "Detroit News" houses because they were taken from plans published in the newspaper, but two of the later ones were designed by U-M professor of architecture George Brigham.

Behind the original farmhouse, a store was built with a recreation hall upstairs that was used for square dances, potlucks, and plays. Attached at the rear of the store was the canning factory; Saline Valley Farms sold its canned goods under its own label, which featured a picture of the twin-siloed main barn.

Gray liked to have the best of everything. The cows were purebred Guernseys that produced very rich milk; the pigs made excellent sausage. The chickens were Plymouth Barred Rocks that Hagen bred carefully, using the trap nest method so he could account for every egg.

The produce and animal products were preserved in the canning factory, the domain of Marian Vaughn, Harold Vaughn's wife. She was a strong force on the farm, organizing cultural events, setting up a summer camp for the members' children, and acting as peacemaker when her husband and Gray, although friends, periodically fought.

J. L. Hudson's food shop was a major customer for Saline Valley Farms products, but the main mode of distribution was through delivery routes that Gray had developed out of his own practice of taking fresh produce to his friends in the Detroit suburbs. Gray himself and several other delivery men would deliver fresh dairy products, produce, canned goods, and meat on a regular schedule.

Although it produced delicious products, Saline Valley Farms was never a financial success, according to Don Campbell, who kept the books. "The whole operation was too expensive to make any money. It never even broke even." Also, although it was called a co-op, it never really was. Day-to-day decisions were discussed at staff meetings, but no one doubted that Gray had the final say. "My husband and the general manager didn't always agree with him," recalls Ruth Hagen, "but he was the boss." 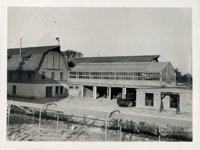 Although inflexible about the farm operation, Gray was tolerant of most other ideas. Political philosophies ran the gamut from anarchism to Republicanism, and religious beliefs from atheism to extreme piety.

During World War II the farm's diversity and reputation for tolerance increased as they made room for Japanese-Americans whom the government had let out of concentration camps but still wanted to keep an eye on, conscientious objectors paroled from the federal penitentiary in Milan, and European Jewish refugees. Says Daniel Katz, a U-M social psychology professor who lived on the farm for a year during the post-World War II housing shortage, "You wouldn't want a more stimulating group to talk to, or kinder."

After the war, wages went up dramatically and Gray had trouble finding workers for what he was willing to pay.

One by one, crops had proved to be uneconomical and were discontinued. Canning stopped during World War II when rationing made it impossible to guarantee orders. The farm became a shadow of its former self, and in 1953 he decided to stop the whole operation.

After selling the farm equipment, Gray continued to live on the farm with his second wife, Meg, in the larger of the Brigham-designed homes. The farm was turned into a youth hostel, the first one west of the Alleghenies. It was run for many years by Johnny Rule, an English-born jack-of-all-trades who had worked in the farm's poultry department, and his wife, May. People from all over the world and local groups like the scouts enjoyed the beautiful scenery, the lake, and the rural atmosphere.

In 1969, Gray, by then seventy-five, sold the farm to Teamsters Local 299 for a park for their members, but they found it too expensive to operate. Gray died three years later.

Many offspring of the farm families still live in the area and cherish memories of childhoods full of freedom and yet busy, helping from maple syrup season to apple picking time. Says Shirley Hagen Grossman, "I had an idyllic childhood, surrounded by an extended family of twenty. If I fell down and scraped my knee, I just ran to the nearest house." Doris Rule Bable agrees, saying, "Maybe it was a failure financially, but it was a great success in living and in personal relationships; very satisfying to the soul."

[Photo caption from original print edition:]: Gray sold the farm to a union local in 1969, but it proved too expensive to keep open as a park. It's now deserted.