McKune Memorial Library isn't as famous as Chelsea's clock tower, but historically it may be even more significant. Built in 1860 in a commanding position atop a hill on the town's main thoroughfare, the Italianate mansion was the last home of Chelsea's founder, Elisha Congdon. Congdon served as Chelsea's first postmaster, as village president, and as its representative in the state legislature.

Congdon came to the area in 1832 and purchased 160 acres on the east side of what would become Chelsea's Main Street. His brother, James Congdon, bought 300 acres on the west side of the street. Elisha Congdon built a log house for his family, which his daughter Emily Congdon Ames later remembered as "just a shanty." When it burned down in 1849, he built a larger frame house on the site.

In 1850, Congdon offered the Michigan Central Railroad free land to build a railroad station on his property. The railroad accepted his offer, and soon farmers and tradesmen from the surrounding areas started coming to Chelsea to make deliveries, pick up purchases, and get their mail at Congdon's post office. The Congdon brothers platted their farmland into village lots, and before long, businesses in the nearby settlements moved to Chelsea. 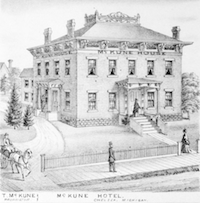 Elisha Congdon died just seven years after building his mansion. By the time this drawing was made in 1874, Timothy McKune had turned it into a hotel.

With that stroke, Elisha Congdon assured Chelsea's future—and his own. In 1860, he moved the frame house to make way for his mansion. Unnerved by the fire that had destroyed his first home, he said that this brick house should be as "strong as a fortress and immune to devastation."

Said to be a copy of the Martha Washington house in Ann Arbor, Congdon's new home featured all the fancy accoutrements one would expect in an elegant house of that era: a parlor with a fireplace, carved woodwork, and a back staircase for servants. Congdon lived there until he died in 1867 at the age of sixty-seven.

In 1870, Timothy McKune, an Irish immigrant, farmer, and businessman, bought the Congdon house and converted it to a fashionable inn called the McKune House. Just two blocks from the railroad station, it served train passengers as well as stagecoach travelers.

When McKune died in 1909, his son, Edward, took over the inn. But the business had passed its peak by then: with the growing popularity of automobiles, people could travel farther in a day and still make it home by evening. The hotel served fewer overnight guests and became something closer to a rooming house. Carol Kempf remembers passing by the McKune House in the 1930s and seeing men who looked like bums hanging out on the long front porch that the McKunes had added.

Meanwhile, in 1932, the Chelsea Child Study Club had founded a village library, starting off with 22 donated books and 100 borrowed from the state library. Originally run by volunteers, the library hired staff after the passage of a 1938 millage, but it still lacked a permanent home. In its first fifteen years, the library moved four times—from one donated space downtown to another—ending up in 1946 on the second floor of the municipal building.

When the Friends of the Chelsea Library were organized in 1949, one of their first objectives was to find a better location. Their search ended in 1956, when Edward McKune's widow, Katherine Staffan McKune, offered to bequeath the house to the organization in memory of her family. Childless and with strong ties to Chelsea (her family founded the Staffan Funeral Parlor), she wanted to leave the house for the village's use.

The house was run-down when the organization received it in 1958—some said it needed more work than it was worth. But with various organizations and hundreds of people donating money, materials, and labor, the house was ready for occupancy by 1959.

Other than the east wing, which was added in 1961, the exterior looks much like it did during Congdon's occupancy. The McKunes' long porch has been removed and replaced by a porch more like the original. Inside, the basic room layout remains the same, although shelves and tables have replaced the nineteenth-century family furniture.

In addition to Chelsea, the McKune Library serves residents of Dexter and Sylvan townships, and the library district may expand to include Lima and Lyndon townships. New challenges include making the library handicapped accessible, increasing parking, and creating more space, either by adding to the building or constructing a new one. Those concerned about retaining Chelsea's heritage hope that any additions do not obscure the original house—and that an equally suitable use can be found for the building if the library moves elsewhere.

Hey, were you looking for the Summer Game code? You found it! Enter CHELSEAREAD on your play.aadl.org player page.