History of the Project

The Downtown Ann Arbor Historical Street Exhibit Program began at the grass roots level as an idea developed by local residents interested in the past and future of downtown. The response was positive, and the Ann Arbor Historic District Commission became the official project sponsor.

Presentations to the Downtown Development Authority, City Council and the four downtown merchant associations quickly followed. These groups endorsed the exhibit program and provided seed capital which was matched by a grant from the Michigan Council for the Humanities and contributions from local individuals, businesses, groups and foundations.

The overall design concept emerged from an intense, all-day brainstorming session attended by over twenty Ann Arbor area design professionals. Since then, a team of designers and historians has continued to develop exhibit concepts. The Historic District Commission accepted the design prototype and the first exhibit was installed at Courthouse Square in June 1999. It includes four transparent glass frames, 13 wall displays, and three bronze artifacts.

As major fund raising continued, nine more glass frames were installed in the Main Street and Kerrytown area in November of 2001, followed by another seven glass frames on State Street and South University in July 2003. Two more frames are planned for the new Broadway Bridge. As each milestone was accomplished, all donors and volunteers joined together in a large, festive, and happy celebration. Work is progressing on a series of over thirty additional wall panels to accompany the glass frames in both the downtown and campus areas.

More bronze artifacts will be installed as time and funds permit. Project historians continue to work with the Ann Arbor Public Schools to develop curriculum materials based on the exhibits and with the Ann Arbor District Library staff on incorporating the exhibits into their website. The program has received several awards for the excellence of its design, at the state level from the Historical Society of Michigan and from the Michigan Historic Preservation Network, as well as an award from the International Downtowns Association. 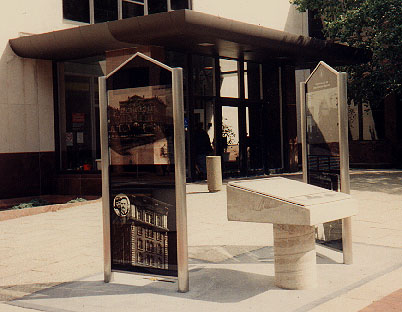