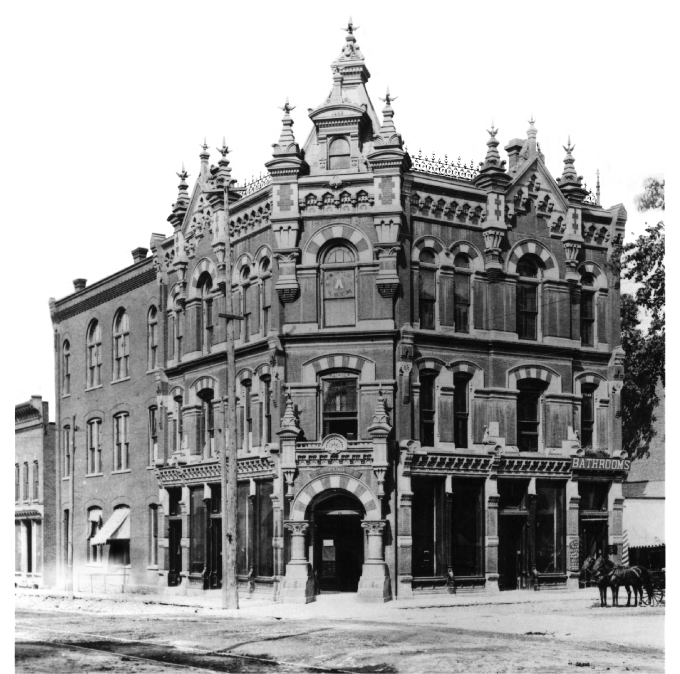 Ann Arbor's early centers for communications, including newspaper, postal, and telegraph offices, were all located in buildings facing Courthouse Square. The telegraph line between Detroit and Ann Arbor was opened on Christmas Day in 1847. The first telephone switchboard was placed in a building not far from the Square on South Main in 1881. There were twenty-five telephone subscribers at that time. From 1882 to 1909 Ann Arbor's sixth Post Office, at the corner of Ann and Main, was housed in what was the showiest building in town the Beal Block, an ornate brick edifice lavished with decorative stonework and iron filigree. Before home delivery began in 1886, every household in Ann Arbor picked up its mail here. In 1909 the Post Office was moved to the new classic Beaux Arts building still standing just to the north on the corner of Main and Catherine. A few years later, in 1916, the Daily Times News building was erected just east of the Beal Block on Ann Street. It was the first structure in Ann Arbor solely to house a newspaper. The Ann Arbor Daily News moved to a new building at Huron and Division in 1936 and was renamed The Ann Arbor News the following year. The Beal Block had been torn down the year before, and the Times News building was demolished soon after.