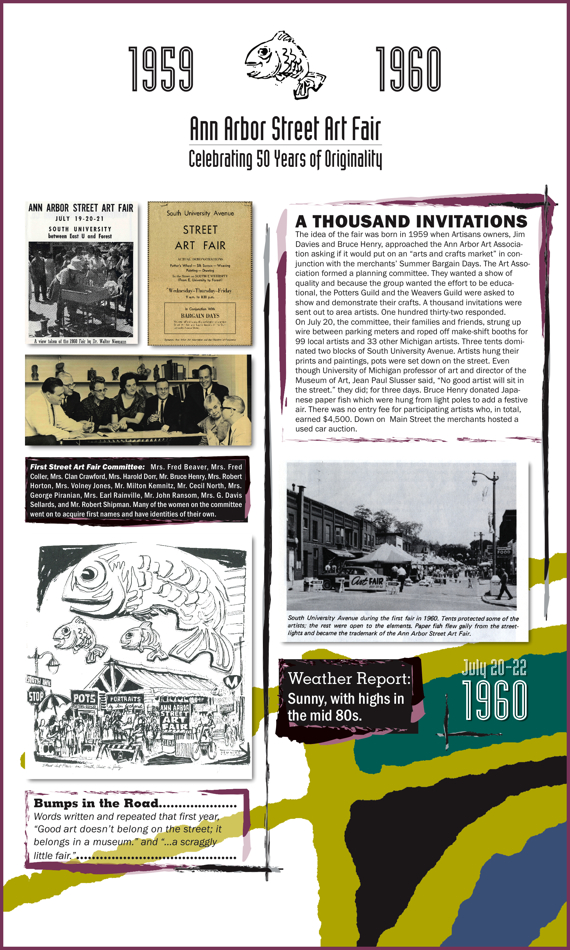 A Thousand Invitations
The idea of the fair was born in 1959 when Artisans owner, Bruce Henry, approached the Ann Arbor Art Association asking if it would put on an “arts and crafts market” in conjunction with the merchants’ Summer Bargain Days. The Art Association formed a planning committee. They wanted a show of quality and because the group wanted the effort to be educational, the Potters Guild and the Weavers Guild were asked to show and demonstrate their crafts. A thousand invitations were sent out to area artists. One hundred thirty-two responded.

On July 20, the committee, their families and friends, strung up wire between parking meters and roped off make-shift booths for 99 local artists and 33 other Michigan artists. Three tents dominated two blocks of South University Avenue. Artists hung their prints and paintings, pots were set down on the street. Even though University of Michigan professor of art and director of the Museum of Art, Jean Paul Slusser said, “No good artist will sit in the street.” they did; for three days. Bruce Henry donated Japanese paper fish which were hung from light poles to add a festive air. There was no entry fee for participating artists who, in total, earned $4,500. Down on Main Street the merchants hosted a used car auction.

Bumps in the Road
Words written and repeated that first year, “Good art doesn’t belong on the street; it belongs in a museum.” and “…a scraggly little fair.”