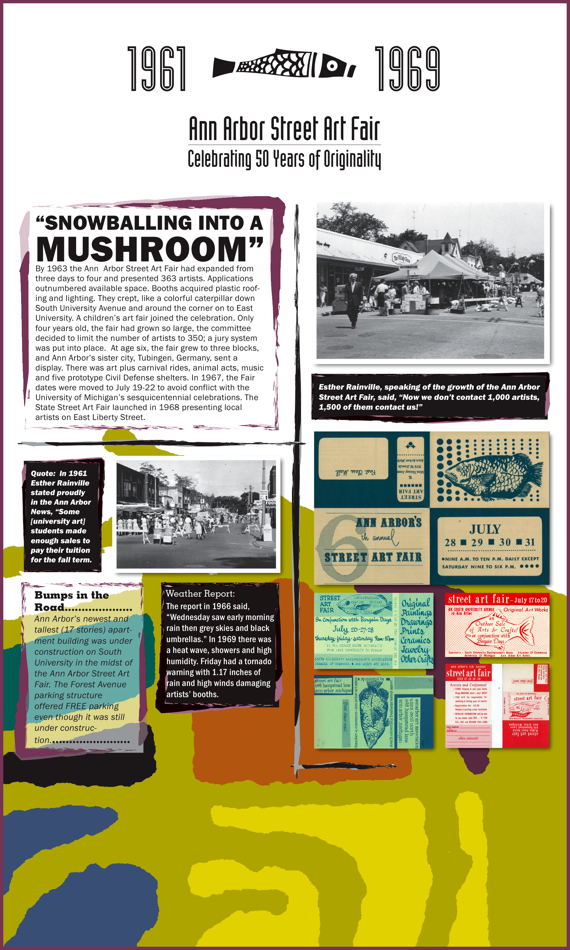 "Snowballing into a Mushroom"
By 1963 the Ann Arbor Street Art Fair had expanded from three days to four and presented 363 artists. Applications outnumbered available space. Booths acquired plastic roofing and lighting. They crept, like a colorful caterpillar down South University Avenue and around the corner on to East University. A children’s art fair joined the celebration. Only four years old, the fair had grown so large, the committee decided to limit the number of artists to 350; a jury system was put into place. At age six, the fair grew to three blocks, and Ann Arbor’s sister city, Tubingen, Germany, sent a display. There was art plus carnival rides, animal acts, music and five prototype Civil Defense shelters. The State Street Art Fair launched in 1968 presenting local artists on East Liberty Street.

Quote
In 1961 Esther Rainville stated proudly in the Ann Arbor News, “Some [university art] students made enough sales to pay their tuition for the fall term.”

Quote
Esther Rainville, speaking of the growth of the Ann Arbor Street Art Fair, said, “Now we don’t contact 1000 artists, 1,500 of them contact us!”

Weather Reports
The report in 1966 said, “ Wednesday saw early morning rain then grey skies and black umbrellas. In 1969 there was a heat wave, showers and high humidity. Friday had a tornado warning with 1.17 inches of rain and high winds damaging artists’ booths.

Bumps in the Road
Ann Arbor’s newest and tallest (17 stories) apartment building was under construction on South University in the midst of the Ann Arbor Street Art Fair. The Forest Avenue parking structure offered FREE parking even though it was still under construction.

Hey, were you looking for the Summer Game code? You found it! Enter CANTGETANYTHINGFORAFINTHESEDAYS on your play.aadl.org player page for your badge.