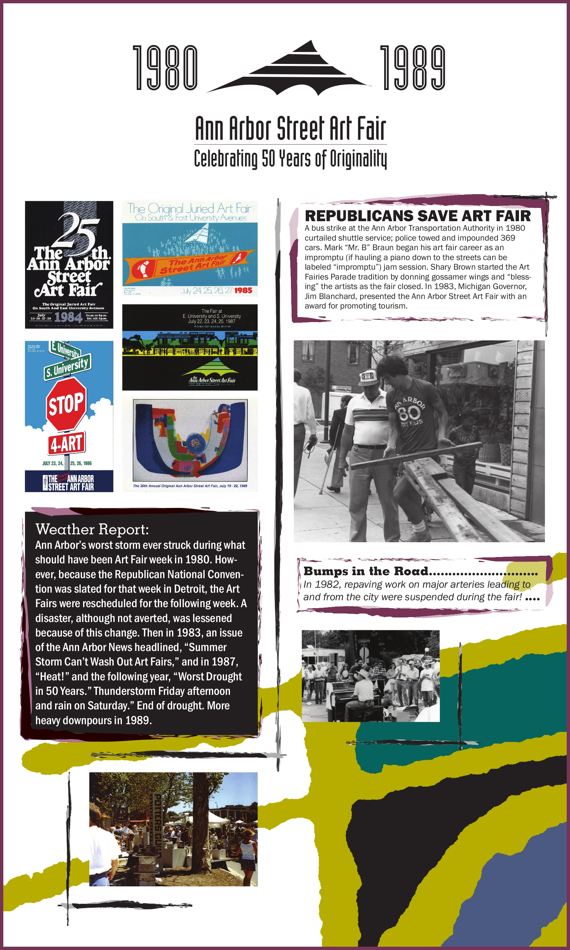 Republicans Save Art Fair
A bus strike at the Ann Arbor Transportation Authority in 1980, curtailed shuttle service; police towed and impounded 369 cars. Mark “Mr. B” Braun began his art fair career as an impromptu (if hauling a piano down to the streets can be labeled “impromptu”) jam session. Shary Brown started the Art Fairies Parade tradition by donning gossamer wings and “blessing” the artists as the fair closed. In 1983, Michigan Governor, Jim Blanchard, presented the Ann Arbor Street Art Fair with an award for promoting tourism.

Weather Reports
Ann Arbor’s worst storm ever, struck during what should have been Art Fair week in 1980. However, because the Republican National Convention was slated for that week in Detroit, the Art Fairs were rescheduled for the following week. A disaster, although not averted, was lessened because of this change. Then in 1983, an Ann Arbor News headlined, “Summer Storm Can’t Wash Out Art Fairs,” and in 1987, “Heat!” and the following year, “Worst Drought in 50 Years.” Thunderstorm Friday afternoon and rain on Saturday.” End of drought. More heavy downpours in 1989.

Bumps in the Road
In 1982, repaving work on major arteries leading to and from the city were suspended during the fair!