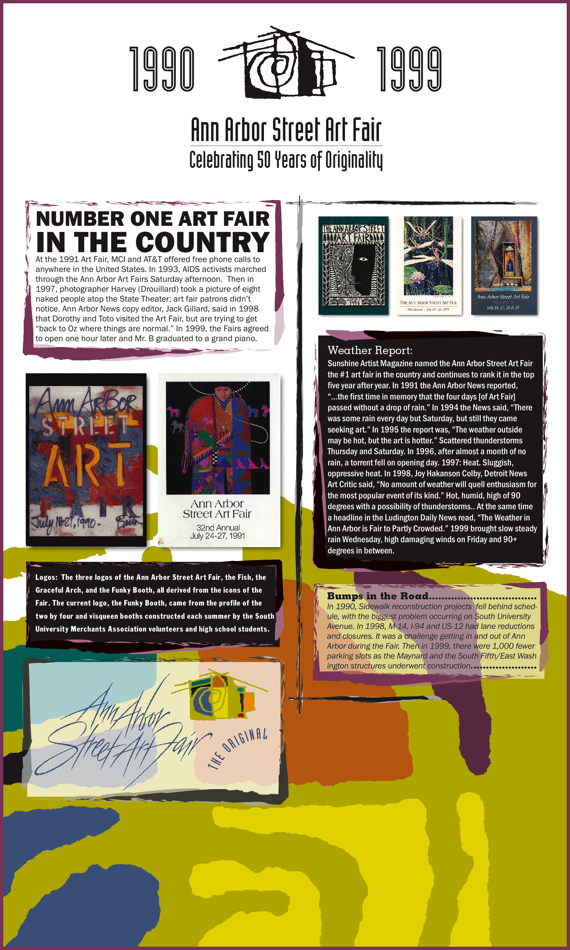 Number One Art Fair in the Country
In 1991, MCI and AT &T offered free phone calls to anywhere in the United States. In 1993, AIDS activists marched through the Ann Arbor Art Fairs Saturday afternoon. Then in 1997, photographer Harvey (Drouillard) took a picture of eight naked people atop the State Theater; art fair patrons didn’t notice. Ann Arbor News copy editor, Jack Gillard said in 1998 that Dorothy and Toto visited the Art Fair, but are trying to get “back to Oz where things are normal.” In 1999, the Fairs agreed to open one hour later and Mr. B graduated to a grand piano.

Logos
The three logos of the Ann Arbor Street Art Fair, the Fish, the Graceful Arch, and the Funky Booth, all derived from the icons of the Fair. The current logo, the Funky Booth, came from the profile of the two-by-four and visqueen booths constructed each summer by the South University Merchants Association volunteers and high school students.

Weather Reports
Sunshine Artist Magazine named the Ann Arbor Street Art Fair the #1 art fair in the country and continues to rank it is the top five year after year. In 1991 the Ann Arbor News reported, “…the first time in memory that the four days [of Art Fair] passed without a drop of rain.” In 1994 the News said, “There was some rain everyday but Saturday, but still they came seeking art.” In 1995 the report was, “The weather outside may be hot, but the art is hotter.” Scattered thunderstorms Thursday and Saturday. In 1996, after almost a month of no rain, a torrent fell on opening day. 1997: Heat. Sluggish, oppressive heat. In 1998, Joy Hakanson Colby, Detroit News Art Critic said, “No amount of weather will quell enthusiasm for the most popular event of its kind.” Hot, humid, high of 90 degrees with a possibility of thunderstorms.. At the same time a headline in the Ludington Daily News read, “The Weather in Ann Arbor is Fair to Partly Crowded.” 1999 brought slow steady rain Wednesday, high damaging winds on Friday and 90+ degrees in between.

Bumps in the Road
In 1990, Sidewalk reconstruction projects fell behind schedule with the biggest problem on South University Avenue. In 1998, M-14, I-94 and US-12 had lane reductions and closures. It was a challenge getting in and out of Ann Arbor during the Fair. Then in 1999, there were 1,000 fewer parking slots as the Maynard and the South Fifth/East Washington structures underwent construction.