How It All Began, A History of the Ann Arbor Street Art Fair, 1985 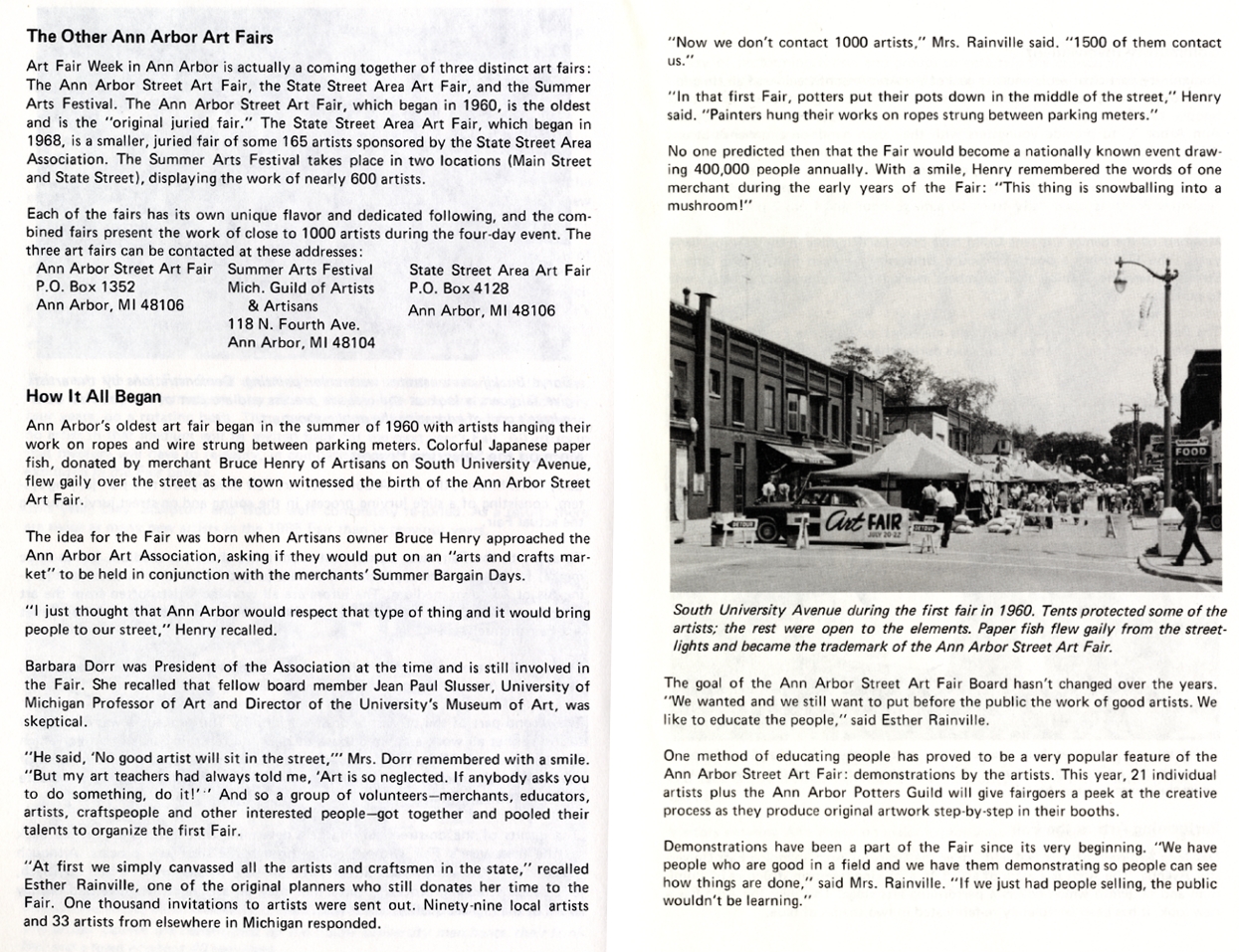 How It All Began

Ann Arbor's oldest art fair began in the summer of 1960 with artists hanging their work on ropes and wire strung between parking meters. Colorful Japanese paper fish, donated by merchant Bruce Henry of Artisans on South University Avenue, flew gaily over the street as the town witnessed the birth of the Ann Arbor Street Art Fair.

The idea for the Fair was born when Artisans owner Bruce Henry approached the Ann Arbor Art Association, asking if they would put on an "arts and crafts market" to be held in conjunction with the merchants' Summer Bargain Days.

"I just thought that Ann Arbor would respect that type of thing and it would bring people to our street," Henry recalled.

Barbara Dorr was President of the Association at the time and is still involved in the Fair. She recalled that fellow board member Jean Paul Slusser, University of Michigan Professor of Art and Director of the University's Museum of Art, was skeptical.

"He said, 'No good artist will sit in the street,'" Mrs. Dorr remembered with a smile. "But my art teachers had always told me, 'Art is so neglected. If anybody asks you to do something, do it!'" And so a group of volunteers--merchants, educators, artists, craftspeople and other interested people--got together and pooled their talents to organize the first Fair.

"At first we simply canvassed all the artists and craftsmen in the state," recalled Esther Rainville, one of the original planners who still donates her time to the Fair. One thousand invitations to artists were sent out. Ninety-nine local artists and 33 artists from elsewhere in Michigan responded.

"In that first Fair, potters put their pots down in the middle of the street," Henry said. "Painters hung their works on ropes strung between parking meters."

No one predicted then that the Fair would become a nationally known event drawing 400,000 people annually. With a smile, Henry remembered the words of one merchant during the early years of the Fair: "This thing is snowballing into a mushroom!"

The goal of the Ann Arbor Street Art Fair Board hasn't changed over the years. "We wanted and we still want to put before the public the work of good artists. We like to educate the people," said Esther Rainville.

One method of educating people has proved to be a very popular feature of the Ann Arbor Street Art Fair: demonstrations by the artists. This year, 21 individual artists plus the Ann Arbor Potters Guild will give fairgoers a peek at the creative process as they produce original artwork step-by-step in their booths.

Demonstrations have been a part of the Fair since its very beginning. "We have people who are good in a field and we have them demonstrating so people can see how things are done," said Mrs. Rainville. "If we just had people selling, the public wouldn't be learning."

The Other Ann Arbor Art Fairs

Each of the fairs has its own unique flavor and dedicated following, and the combined fairs present the work of close to 1000 artists during the four-day event. The three art fairs can be contacted at these addresses: