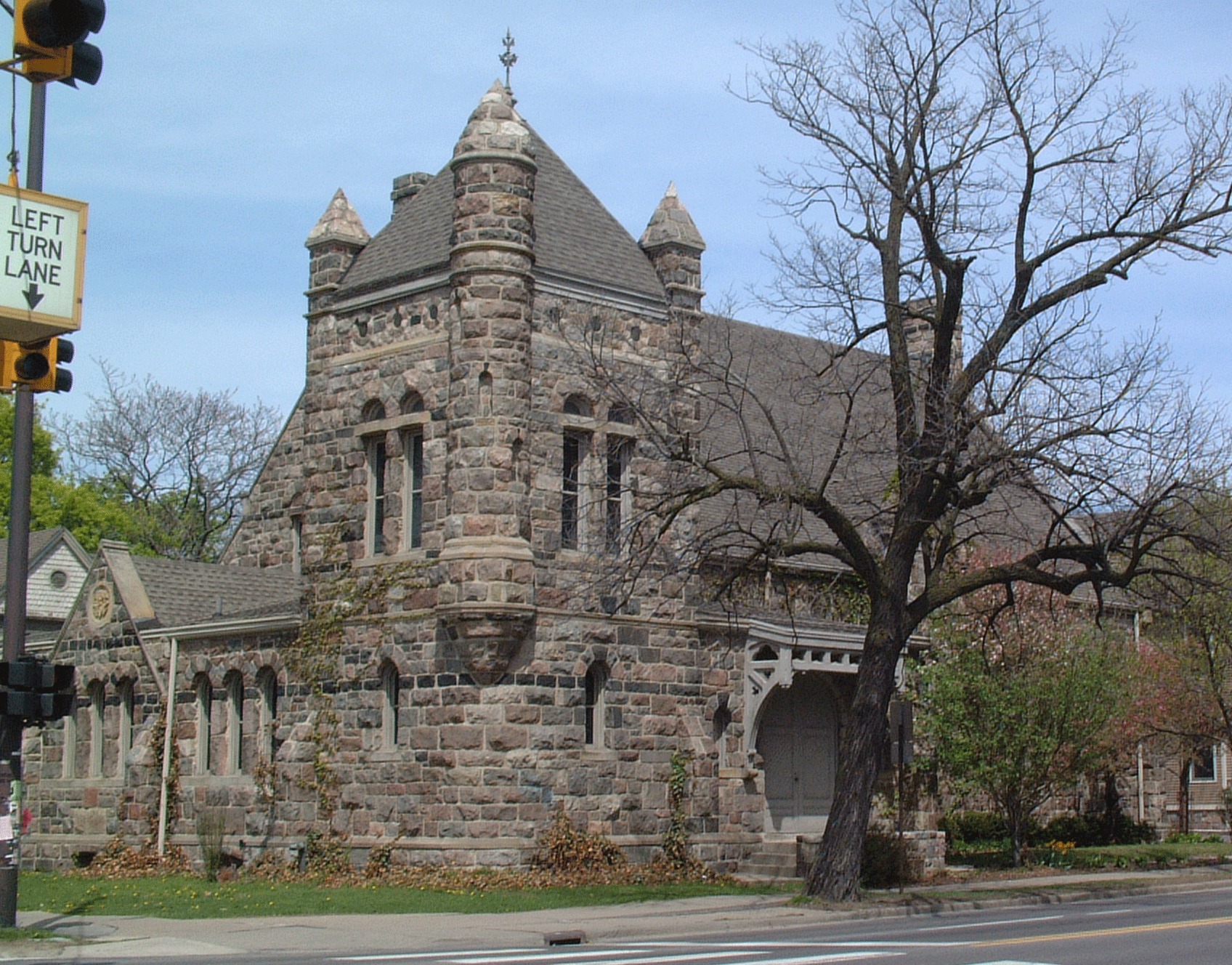 Dr. Jabez T. Sunderland came to the ministry of the First Unitarian Church in 1878. During his twenty-year tenure he and his wife Eliza (who taught history and political science at Ann Arbor High School) were leaders in the religious and intellectual life of the town. They soon initiated the project of a new church building and were successful in raising the $19,000 required. The building was dedicated in 1882, the Ann Arbor Register of September 13 noting that "The structure is thoroughly churchly in look, picturesque in outline, and certain to be one of the most admired, architecturally, of our public buildings." Donaldson and Meier of Detroit were the architects and the fine stone work was done by the Walker Brothers of Ann Arbor, stone masons also for the Michigan Central station.

The Romanesque design is strongly reminiscent of the work of the influential Boston architect, Henry Hobson Richardson. The tower is much like that on Boston's Trinity Church, the building which launched Richardson's career in 1872. The new house of worship contained an audience room or chapel, Sunday-school rooms, a parlor, and a spacious and well-furnished reading room. A legacy left by Judge Ezra C. Seaman of Ann Arbor provided for the establishment of a Liberal Religious Library "to be accessible to all persons who desire to read the best liberal-religious thought of the age."

In the early 1930s, during the ministry of the Reverend Harold P. Marley, the original draft of the Humanist Manifesto was authored by congregant Roy Wood Sellars and read in the church. The church took an assertive lead in the civil liberties movement and in the Ann Arbor Community Forum, which debated and lobbied for means to end the Depression, for public school improvements and for upgrading city services.

During the decade before World War II the city and university doors were by and large closed to the emerging anti-war and peace movement groups as well as to the labor groups which were organizing. The Unitarians, always staunch supporters of free speech and civil liberties, voted to provide space for these groups to meet. In 1937, the Fellowship Room of the church was designated "Unity Hall" and the church was opened seven days a week to accommodate educational programs in labor problems and leadership skills for labor union activists. The Washtenaw Progressive, a "people's front" newspaper, with a governing body drawn from the workers' unions, was published in the church offices.

During World War II the Unitarians collaborated with the Unitarian churches in Detroit to serve the large number of workers coming in to Ypsilanti to work in the bomber plant. These services not only included a "Wayside Pulpit" but provided a nursery, playground and recreational facilities, giving social work experience to numbers of young people eager to serve in non-military programs.

In 1946, when the Unitarians moved to Washtenaw Avenue, the congregation of the Grace Bible Church purchased the building and used it until 1975, when they built a new sanctuary on South Maple Road. In 1985 the building, badly deteriorated inside and out, was purchased by D. B. Associates Ltd. The exterior stone work was restored to its original appearance and the entire structure reroofed. The interior was totally rebuilt to house the architectural firm of Hobbs and Black, Associates, Inc. In the rebuilding process, a Tiffany window was uncovered, much to the surprise of the new owners. Installed to commemorate the loss of a child in the 1890s, the window had been boarded over in the 1930's and forgotten when the building was sold. Hobbs and Black had the window restored by Tiffany experts and it graces the east wall of their reception room.