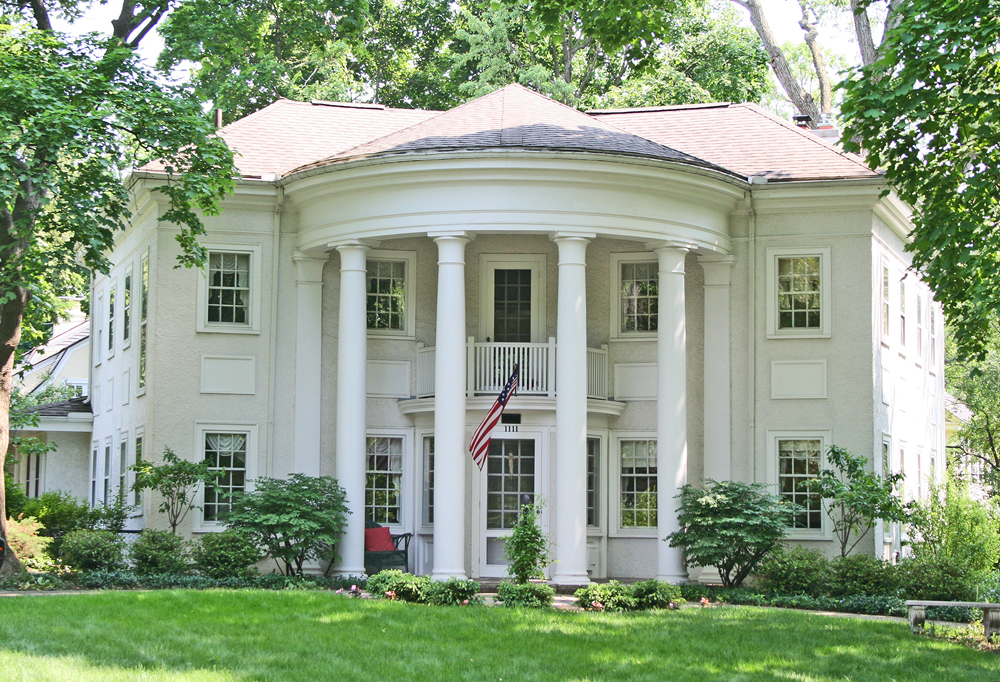 In early 1914 developer Charles Spooner planned a subdivision named Scottwood that promised to be: "a group of handsome residences... amid a landscape setting not hitherto attempted...Unlike most additions to the modern city, platted with straight streets and small lots giving scarcely breathing room between the houses, it has winding roads (and) a large garden space... indeed, each house stands on a little knoll, commanding a pleasing view. "Such was the setting for the James Petrie home.

Six of the houses in Scottwood were designed by Dr. Fiske Kimball, at that time an Assistant Professor of Architecture at the University of Michigan. Later nationally famous as the head of the Philadelphia Museum of Art, Kimball described this house in a 1918 issue of Architecture. Since this lot was at the intersection of Norway and Fair Oaks, Kimball chose to place the house facing the corner, rather than either of the streets. The unique floor plan combines circular rooms in the center of each floor flanked by rectangular wings set at an acute angle to the main axis. The round portico in front with its elegant two-story columns exhibits Kimball's fondness for classical detailing. As stated in the brochure for the development, Kimball's designs were to have the "quiet unobtrusiveness of good taste. Each completely individual, they nevertheless harmonize in charm of design and refinement of detail."

The house was built for James N. Petrie, Esq., his wife Clara and sons Warren and Floy. In 1918 the Petries sold the house to Osteopathic Physicians Thomas and Dorothy Sellards. After a succession of occupants, Dr. Norman Maier purchased the house in 1944. In 1979 it was sold to Robert and Carol Mull who continue to live in the house with their three children. The Mulls have researched the history of the house and sensitively maintain it.