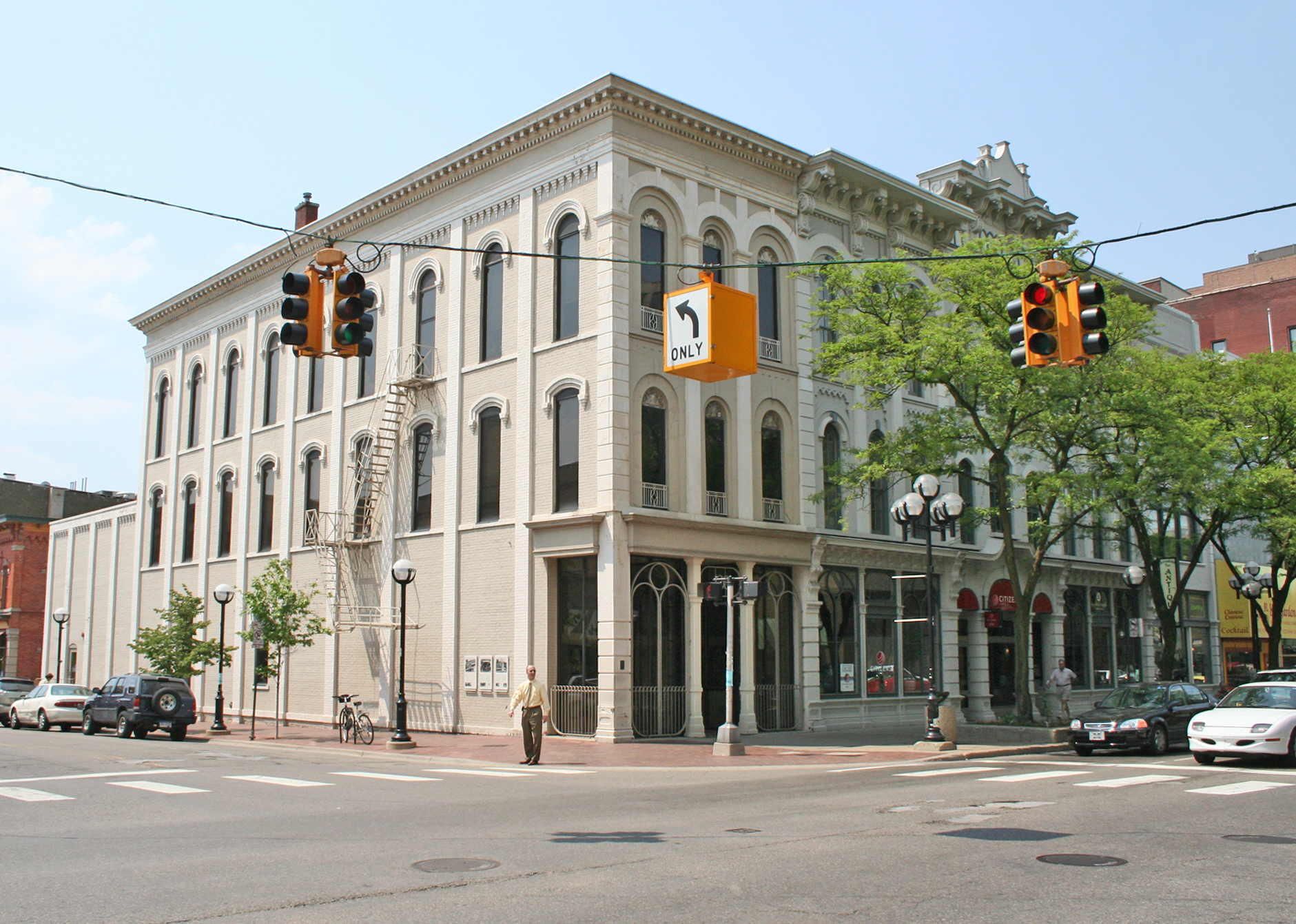 A photograph taken in 1867 pictures this impressive Italianate block built at a cost of $20,000, and newly opened for Philip Bach's dry goods business. "Prices were quite high at the time and a single stair-case cost $500," a later historian recalled. The photo shows the original wide flat cornice supported by ornate Italianate brackets. The name, Philip Bach, is over the awning, and a large "Business College" sign above the cornice indicates the use of the third floor.

Bach formed a partnership with Peter H. Abel in 1867. Some years later the firm became Bach and Roath. Around the turn of the century, Bruno St. James, Jr., left the firm of Goodyear and St. James to purchase the store, hiring Miss Bertha E. Muehlig as the bookkeeper for the new firm. She took over management of the business in 1911 and in 1924 she became the owner of the building as well as the business, continuing to do the bookkeeping as before.

Bertha's paternal grandparents emigrated from Germany in 1840. A devoutly religious family, they were part of the early Lutheran congregation led by the Reverend Frederick Schmid. Bertha was certainly a successful business woman, but she was even better known for her readiness to provide food and clothing for those struck by misfortune. She became a special patron of the Patrick Donovan School on Wall Street, where the pupils did not have the normal advantages. When the Donovan School was replaced by the new Northside School, she donated the dining room furniture, a silver tea service, and an aquarium. Each year she sent the children candy at Christmas time and pencils on Valentine's Day. A friend of the ladies at the Anna Botsford Bach Home on Liberty Street, she remembered their birthdays and provided many necessities.

Bertha Muehlig received many honors in recognition of her services to the people of Ann Arbor. After her death, several local businessmen invested in the store, continuing the business as before and perpetuating the name of the kind and generous woman until the late 1970s. The store retained the interior decor and services of the beginning of the century, including a spring operated cash carrier system which was probably the last of its kind in the state.

The law firm of Hooper, Hathaway, Price, Beuche and Wallace purchased the building in 1981 for their offices. A thorough and elegant renovation was done, for which the owners received a Bicentennial award. Windows were unblocked and the original appearance was restored as much as possible, with an iron entry created to mimic the original store front. They have also kept the old elevator and the oak staircase inside. (See previous photograph)