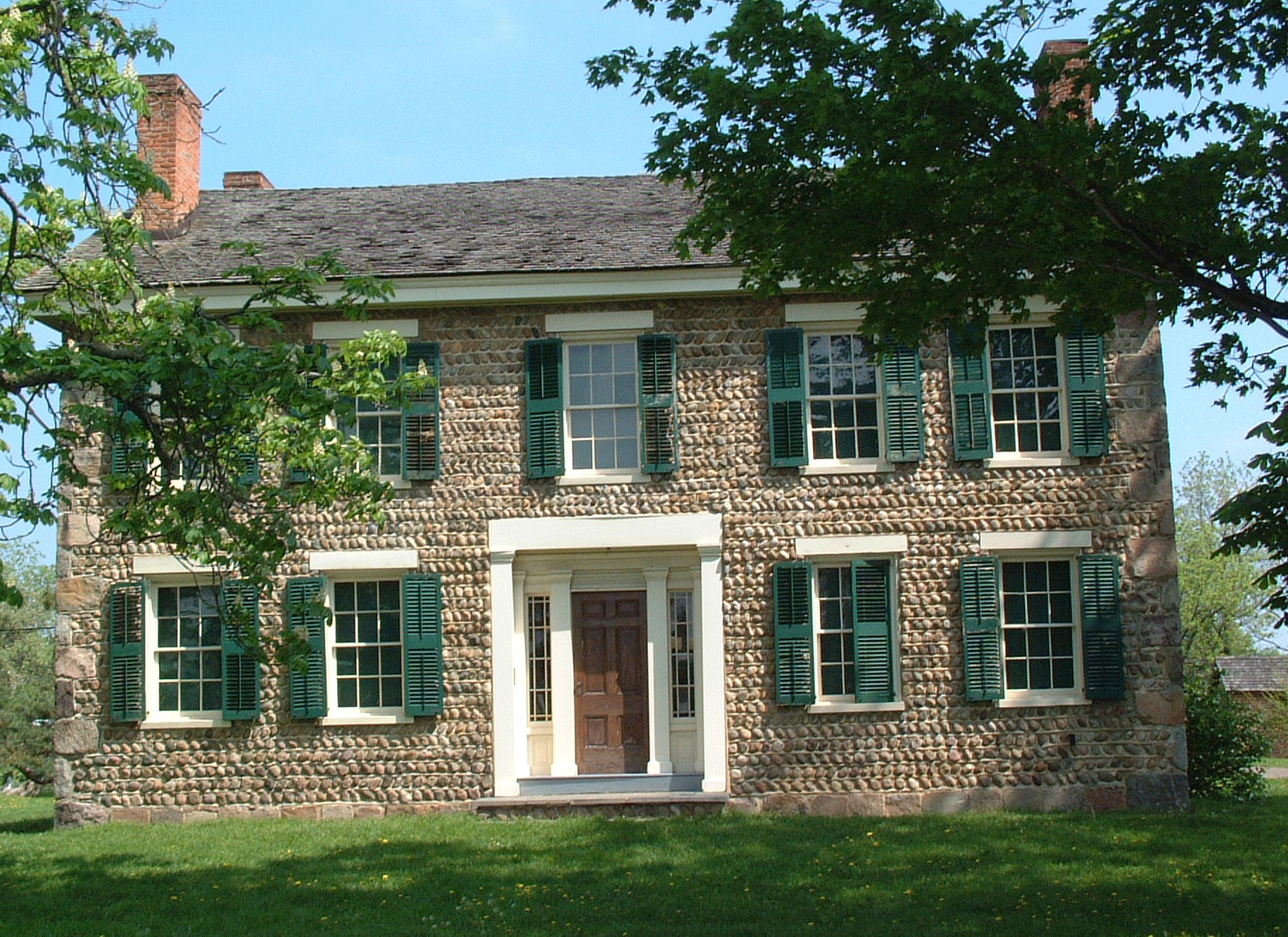 This farmhouse is an example of an unusual building style that began in the 1830s in western New York and moved westward with the frontier. Erected in 1844 for Dr. Benajah Ticknor by Stephen Mills, a mason trained in New York, the house combines the restrained elegance of the Georgian style with an extravagant facade of cobblestones, laid in herringbone rows.

The front door, flanked by columns and glass sidelights, opens into a wide central hall with a staircase and "grained" woodwork. A parlor and library, sitting room, and bedrooms complete the stone portion of the house, which contrasts sharply with the simple wooden New England kitchen wing. The section of that wing containing the dining room and maid's chamber is probably the original tiny house which Heman Ticknor bought from farmer Charles Maynard in 1835. Heman purchased the farm for his brother, Dr. Benajah Ticknor, a U.S. Navy surgeon. After years at sea off South America and in the Far East, Dr. Ticknor wanted land in Michigan as an investment and for a retirement home.

In 1840 Benajah and his wife Gesie paid their first brief visit to Ann Arbor. The sight of Heman, his wife Eliza, and seven children crowded into so small a house may have prompted Benajah to build the larger stone house for both families. In 1845 a kitchen, pantry, milk room, hired men's dormitory, toilets and a woodshed were added to the frame house, which was joined to the stone house at the same time. Several outbuildings (destroyed by fire in 1924) completed the farm.

From 1844 until his death in 1858, while accepting several assignments at sea and in naval hospitals, Benajah Ticknor called Ann Arbor his home. A self-taught classical scholar, mathematician, philosopher, and diarist, Dr. Ticknor participated in the social and intellectual life of the University community and was sought after for medical opinions. Ticknor's classical and medical library was left to the University of Michigan. Yale's Sterling Library preserves the handwritten journals of his voyages and other experiences between 1818 and 1854.

In 1860 Ticknor's widow sold the farm to Horace Booth, who passed it to his son. Nelson Booth enlarged the 183 acres, added barns for thoroughbred race horses, installed a front-yard fountain, and added an Italianate front porch.
In 1881 the farm was purchased by Scottish immigrant William Campbell, an Ypsilanti merchant, who soon achieved renown for his pure-bred cattle. Campbell, his son Clair, and grandchildren William, George, and Mary kept the house essentially unchanged for 91 years. After World War II most of the farm's acress were absorbed by housing developments and park land. In 1972 George and Mary Campbell sold the house and the last 4.5 acres to the city to complete Buhr Park.

Since 1974 a volunteer citizens group, the Cobblestone Farm Association, has provided research, planning, and fund-raising for restoration of the house and grounds as a working farm museum.