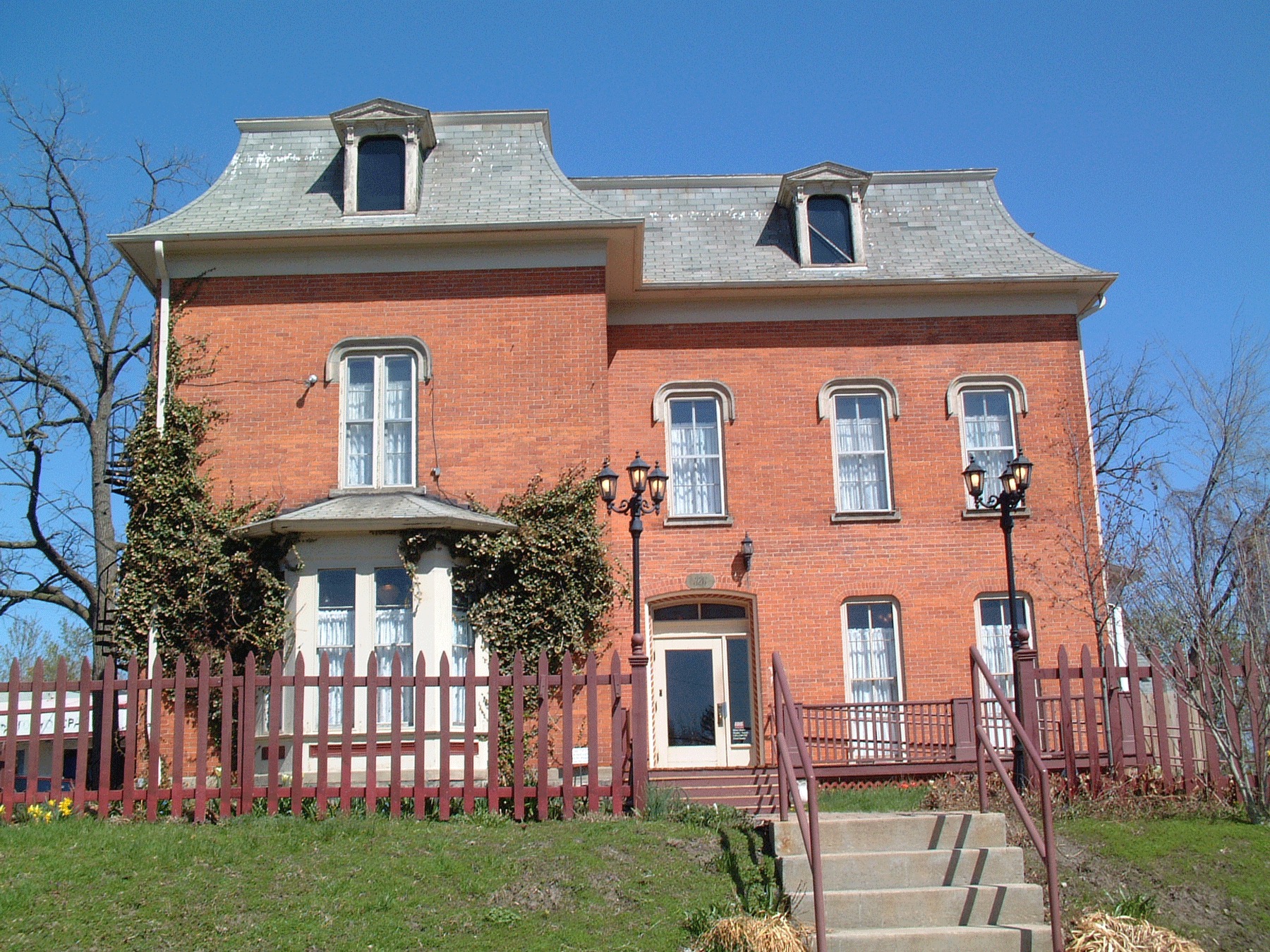 Peter Brehm House, 1870
Daniel's On Liberty
Peter Brehm, proprietor of The Western Brewery located on Fourth Street near William Street, built his mansard-roofed brick home in the Second Empire style around 1870. In choosing this particular style, Brehm was participating in a short-lived trend in Ann Arbor architecture. The 1860s and 70s witnessed a flurry of building activity, especially in the central city. A few of the more affluent chose the Second Empire style, the most elaborate examples of which were Hill's Opera House at Main and Ann Streets (now demolished as were most residential examples of this style), and the Raja Rani restaurant at Division and William Streets, built as the residence of architect Peleg Marshall in 1860. This boom turned to bust in the Panic of 1873 and newspapers began to fill up with mortgage sales and business failures. Building activity virtually ground to a halt. Brehm's residence remains a rare survivor of this style.

The mansard roof that is the hallmark of this fashionable style was popularized by French Renaissance architect Francois Mansart, revived by Napoleon III in the 1850s and copied throughout Europe and the Americas. Brehm's residential version is a simple domestic expression of the wealth, and monumentality reflected in more elaborate examples. The roof, it should be noted, tops a building more Italianate in character with typical round-headed windows, hood-moldings, overhanging eaves and decorative brackets. Such combinations of styles were common for Midwest American architecture.

Brehm founded the Western Brewery in 1861 after arriving in Ann Arbor the same year. By the 1880s, under different ownership, it was the largest brewery in Ann Arbor. Brehm became wealthy as a brewer and in 1868 was able to purchase the property at 326 West Liberty, demolish an old house on the site, and construct his Second Empire building. Another brewer who also became wealthy in this period was John Adam Volz, who built an elaborate Italianate house at 716 North Fifth Avenue.

Brehm's quick rise to wealth is almost as puzzling as his decline, for by 1872 he no longer owned the Western Brewery. Equally mysterious is his suicide in 1873, though the Panic of that year may have been the root cause. (Volz lost his brewery in the same depression.) No hint of scandal, however, was mentioned by either newspaper when they noted his death: "Peter Brehm, former proprietor of the Western Brewery committed suicide on Friday last, by shooting himself in the forehead with a pistol. He had been for some time laboring under a sort of mania induced by hard drinking... The particulars of the melancholy death of Peter Brehm... are these: suffering from temporary insanity, he thought he should be sued by someone... Last Friday he came home and informed his wife that he had been sued and must go to court. Changing his clothes, he started towards the Court House, but soon returned going directly to his room, shooting himself through the head, dying instantly. Mr. Brehm was a kind-hearted and very generous man, respected by all who knew him"

After Brehm died his wife, daughter, and son Gustav, who served two terms as City Clerk and County Treasurer, continued to live here. In 1894, Gustav joined forces with a former competitor of his father and started the Ann Arbor Brewing Company, of which he was secretary.
Two years later he sold his Liberty Street property to William Arnold, a local jeweler and a descendant of early immigrants from Germany. Arnold and his wife Siona raised five sons and continued to live in the house until their deaths in 1930 and 1932. William Sr., a well-known and prosperous merchant, owned the German-American savings Bank, the State Savings Bank, and the Artificial Ice Company, one of the major industries in Ann Arbor in the early 20th century. Other businesses associated with the Arnold family included Ann Arbor Asphalt, Ann Arbor Construction, and Abbott Gasoline.

In the 1930s and 40s the house was used by family relations attending the University of Michigan and as a summer home for Arnold family members. In 1952 the International Order of Odd Fellows purchased it and converted it to a meeting hall. When the Moveable Feast restaurant bought it in 1978, Emil Arnold reminisced about growing up in the house, remembering that at the turn of the century electricians and plumbers had trouble wiring and plumbing the house due to its thick brick walls.

Today Peter Brehm's, without its original porch, front door, or roof brackets has been partially restored both inside and out. The interior has its original shutters and bannister which add to the ambience and form an elegant backdrop for dining.