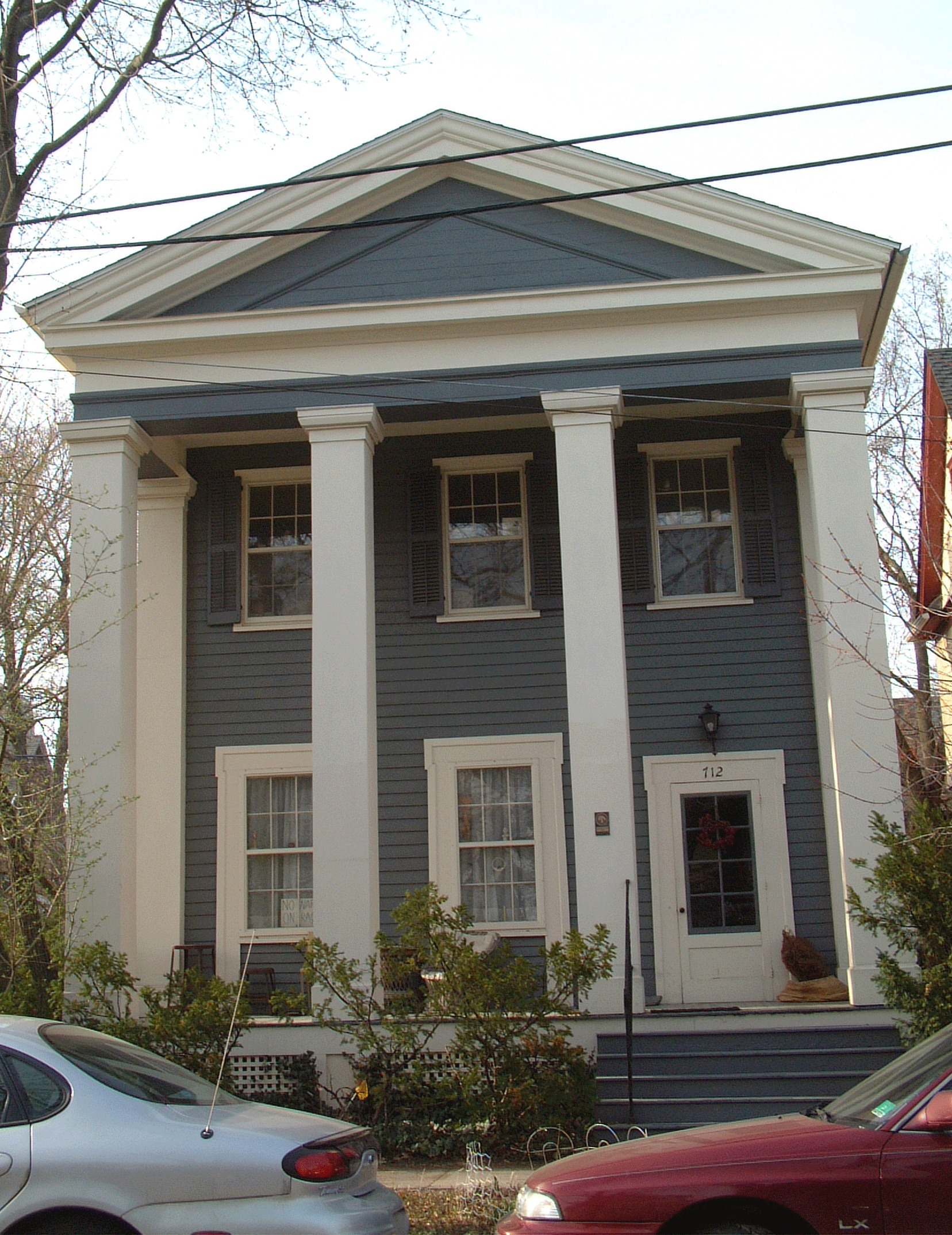 This handsome Greek Revival structure with its two-story pedimented portico is often overlooked because of its cramped location. When the house was completed in 1851, however, it stood on a large landscaped lot at the southeast corner of State and Ann Streets. It was purchased by Dr. Moses Gunn, a newly hired Professor of Anatomy and Surgery at the just-opened University of Michigan Medical School.

Gunn's wife Jane, in a memoir published in 1889 after his death, noted that when they "purchased a roomy house nearly completed," the long pillars in the front "suggested a style of Grecian architecture now almost obsolete." Born in East Bloomfield, New York, Moses Gunn entered Geneva Medical College in 1844. After receiving his medical degree in 1846, he travelled to Ann Arbor where he joined with Silas Douglass and Abram Sager to open a private medical school in the Washtenaw County Courthouse. In 1850 he was appointed to his positions in the University Medical School where he worked for the next 13 years. Though a bit aristocratic, he was very much respected and today two portraits of him hang in the present University Hospital. A student described him as a "...striking figure of a man with an erect military carriage, clad in a snug-fitting, carefully buttoned-up black frock coat... who frequently raised his gold-rimmed eyeglasses to note the architectural peculiarities of each house he approached... then the eyeglasses were allowed to swing from their long gold chain to be quickly readjusted should anything seem worthy of attention"

The house is a fairly unusual example of the domestic Greek Revival in the Midwest. Built entirely of wood, it has a full pediment supported by four very tall two-story columns. These columns are square, not round and fluted as are those on more high style examples. It also has "shouldered" or "eared" trim around the doors and windows, a detail that is repeated on the interior.

The residence of a former governor of Michigan, Alpheus Felch, stood just to the south of this house on State Street. The two houses were reputed to be almost identical, designed by local builder Andrew DeForest. They must have made a spectacular impression on people entering the city coming up State Street from the railroad depot on their way to campus.

Although Gunn remained a faculty member until the 1860s, he left Ann Arbor in 1854 for Detroit where he could find more patients for his private practice. The house was sold to Richard Hooper, owner of the city's oldest brewery. The Hooper sons continued to live in the house after their father's death in 1866 until the Depression of 1873 drove them and many other brewers out of business.

The house was then empty until William H. Payne bought it in 1883. Payne was a new professor at the University of Michigan teaching a new subject: the science and art of teaching. He pioneered what later became the University of Michigan School of Education. He lived in the house only four years, but his diaries about his life in Ann Arbor, dictated to his wife many years later in 1901, reveal his interest in this house. He noted that the house was believed by the townspeople to be haunted by the ghost of a Hooper who had committed suicide. The oldest known photograph of the house, probably from 1915, comes from Payne's papers at the Bentley Library.

By the 1890s the neighborhood was no longer fashionable and the house became a rental, though it had the same owner for many years and was never divided up into apartments. In 1898 it was moved to the rear of its original lot, its orientation was changed to face Ann Street, and three newer houses constructed where it had been. Some of the earliest tenants included the well-known librarian Nellie Loving, who lived here with her mother for a short while.

Dr. David James, a respected orthodontist, and his wife Naomi, an interior decorator, purchased the house and lovingly restored it while they raised their two children here. In 1986 Mrs. James received a preservation award from the Ann Arbor Historic District Commission but by 1987 was forced to sell the house due to illness. The new owners, Lars Bjorn and Susan Wineberg, continue to maintain this historic structure and recently added a classical "deck" above the rear kitchen wing which is very much in keeping with the classical facade.

Hey, were you looking for the Summer Game code? You found it! Enter GUNNYSHACK on your play.aadl.org player page.