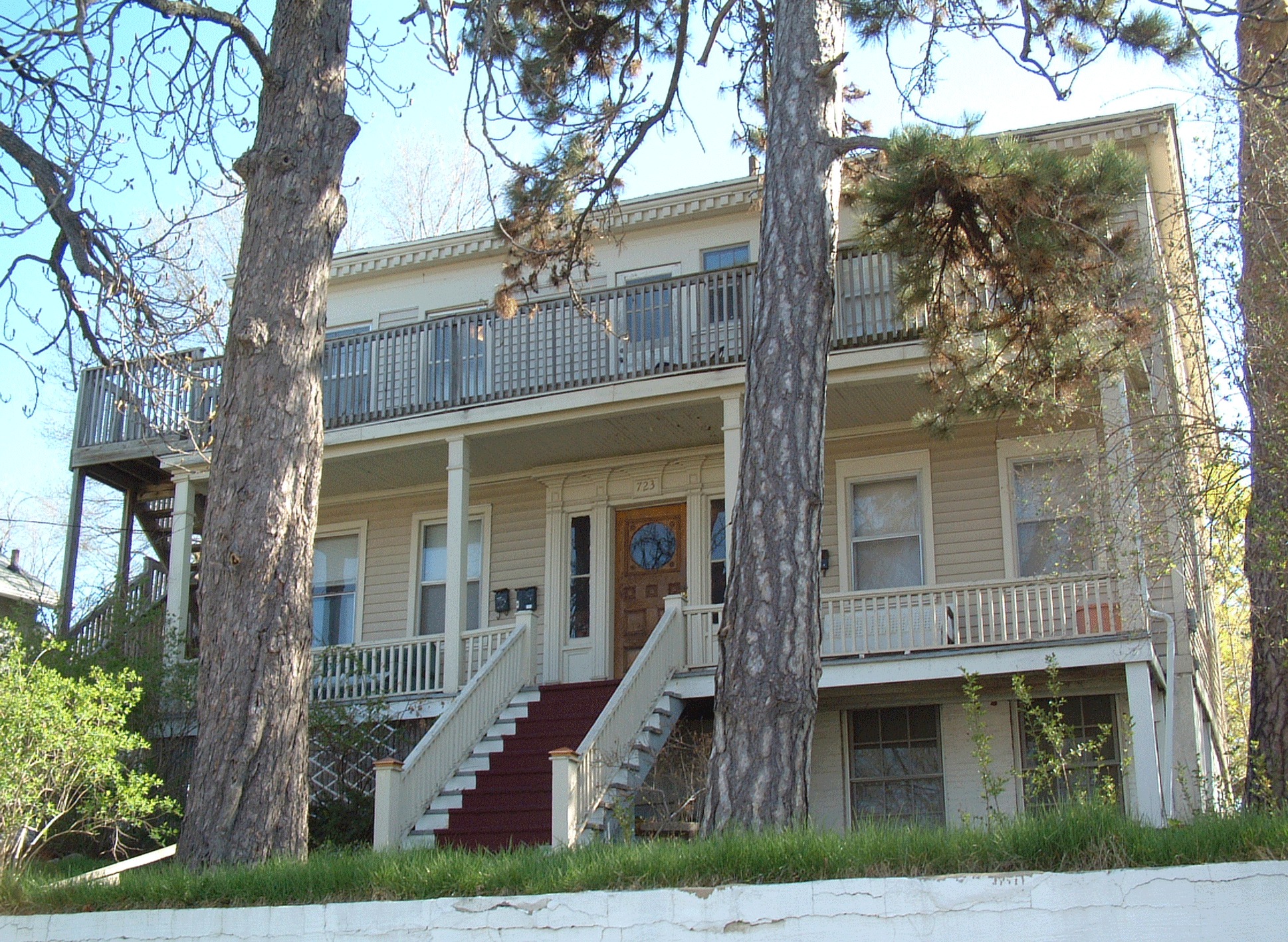 Behind its unappealing asbestos siding and fire escapes, this house is a gem waiting to be uncovered and restored. Built in approximately 1838 by Joseph Waite, it was originally two stories high and one room deep ???_ an example of the type of folk house known as an I-house. Although built as a private house, and adorned by a very handsome Greek Revival doorway, it soon became a rooming house for workers at the nearby Jones and Foley paper mill. Times were tough in the country after the Panic of 1837 and large houses like this quickly became a heavy burden for individuals.

A very individualistic citizen, however, saw fit to purchase the house in 1865 and enlarge it into its present Italianate configuration. This was Daniel B. Kellogg, clairvoyant physician. Dr. Kellogg was famous enough -- and his home was grand enough -- to be featured in an engraving in the 1874 Atlas of Washtenaw County. From this engraving one gets a true image of the treasure which lies beneath the surface.

Kellogg was born in Pittsfield Township to pioneers from Oneida County, New York. His first encounter with his "gifts" for clairvoyance (or "clear vision") came when he was 17 and encountered a traveling hypnotist. Kellogg was a quick study and soon his neighbors in Pittsfield visited him to "join hands, hear rappings, witness automatic writing and watch the parlor furniture dance as if bewitched." Word of his supernatural perceptions spread quickly and his diagnoses were often linked with remedies. He moved to Ann Arbor in 1865, set up his office on nearby Broadway, and did a brisk business in mail-order diagnosis, answering letters from all over the country and even from Europe. To keep up with demand for his services, he enlisted the aid of his brother Leverett and sold a line of "family medicines" as well, including Kellogg's Liver Invigorator, Kellogg's Magic Red Drops, Kellogg's Family Cathartic Pills, and Kellogg's Lung Remedy.

Unfortunately Kellogg's success was short lived. He died in 1876, at the young age of 42. Undaunted, Leverett continued to sell the patent medicines while Daniel's son Albert C. Kellogg continued to practice his father's unusual profession. An 1891 biography of Albert stated that he continued to manufacture Dr. Kellogg's Family Remedies, which were handled by druggists throughout the State of Michigan, and that his pleasant home in the old part of the town was where he and his wife "keep up the old homestead."

By the 1890s the house had once again reverted to a rooming house, and tenants came and went in rapid succession. As in the rest of the area known as "Lower Town," the decline persisted as businesses and residents moved closer to campus and to the thriving shops on Main Street. But the house did not go unnoticed. In 1936, Emil Lorch of the University of Michigan School of Architecture, noted the unusual entrance and added: "plus or minus good stairs, interior doors and trim." At that time the house was owned by Louis Goffe, a tenant for over 25 years. It remains a rooming house today.