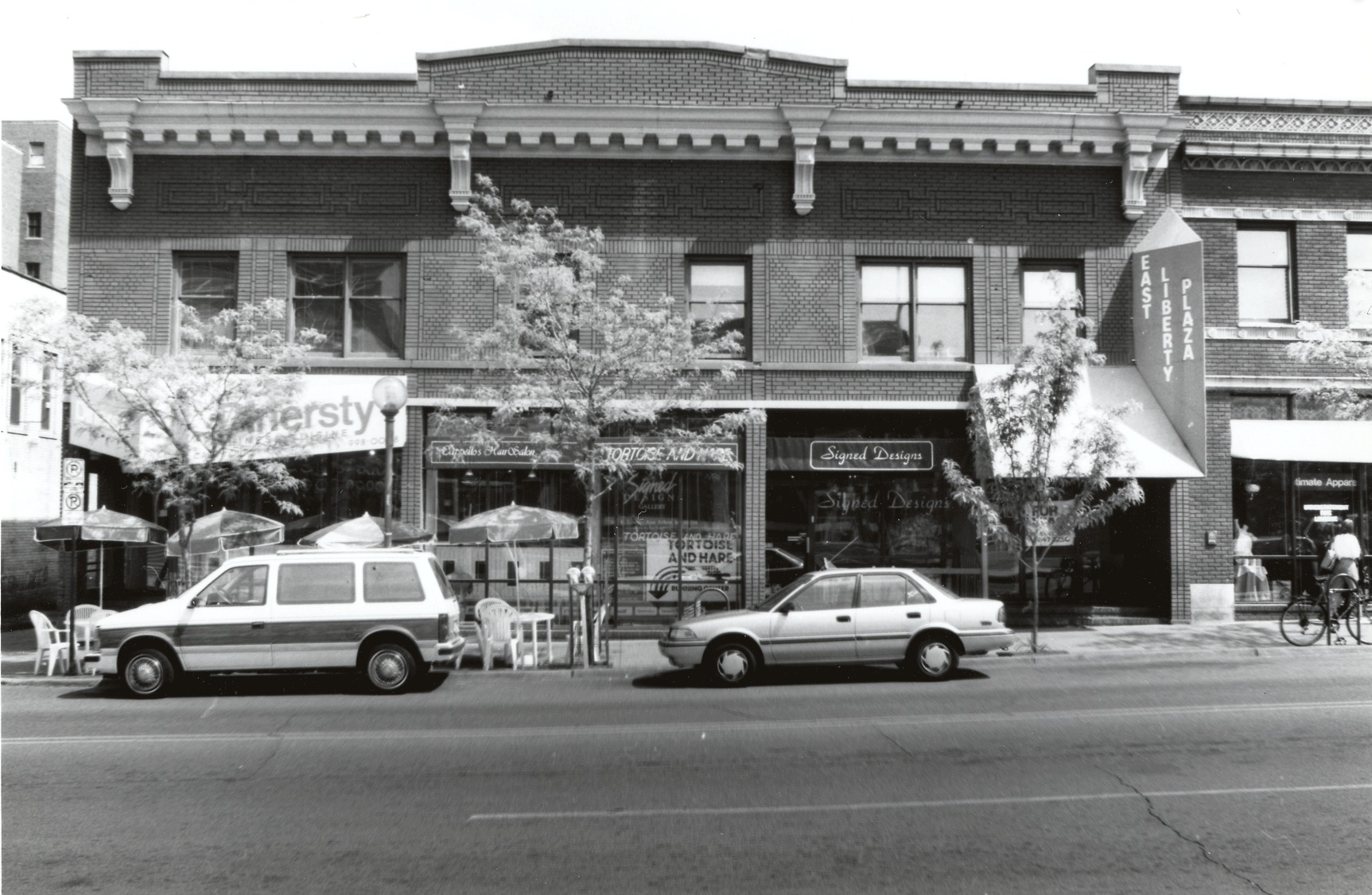 These two buildings, one built by Osias Zwerdling and the other for Dr. Cyrenus G. Darling, were united to form the East Liberty Plaza in the late 1970s and now house shops at the street level with offices above. The combined buildings are a part of the Main Street Historic District.

The cornice of the Darling Block on the corner is embellished with delightful terra cotta ornamentation, an example of a typical Art Deco repetitive design motif. The brick "fireproof" structure was begun in 1915 for Dr. Darling with Malcomson, Higginbotham, and Palmer as its architect. L. D. Wines superintended construction. In 1917 Dr. Darling and Dr. Charles L. Washburne opened offices on the second floor for their private medical practices.

Dr. Darling had earlier built a private hospital on Fifth Avenue where the Federal Building now stands, which he sold in 1915 to John Gates. A leader in the building of the first St. Joseph's Mercy Hospital, he also served there as chief of staff. He was on the faculty of the University of Michigan Medical School and served as dean of the School of Dentistry. Active in public affairs, he filled a term as mayor of Ann Arbor.

Osias Zwerdling came to Ann Arbor in 1903 and worked for the Mack and Company Department Store for a year before opening his own business on Main Street. Three years later he bought the old Koch residence on East Liberty, and in 1915 he moved the house to Fourth Avenue and built the present building adjoining the Darling Block.

Zwerdling was a "ladies' tailor" and furrier who was successful enough to buy the Darling Block. He retired in 1943. A well-known philanthropist and leader in Ann Arbor's Jewish community, he was an organizer of the Beth Israel Congregation, and was responsible for organizing the Hillel Foundation for university students here in Ann Arbor, the second Hillel in the United States. When interviewed in 1974 at the age of 96, he still maintained an active interest in the building and kept his own accounts. Mr. Zwerdling died in 1977.

The Zwerdlings Furs sign on the west wall of 241 East Liberty, done in very early Art Deco style, depicts a wolf baying at the moon amidst a forest of trees. It was painted in 1915, not by an ordinary sign painter but "by an artist." Zwerdling had always remained proud of that sign, and spoke with the developers of the building about it after citizens became concerned over the sign's fate in the summer of 1977. Recognizing that the sign was both a work of art and a historic artifact, the developers wisely left it untouched. Today it remains the only artist-designed advertisement in the city dating prior to World War I.