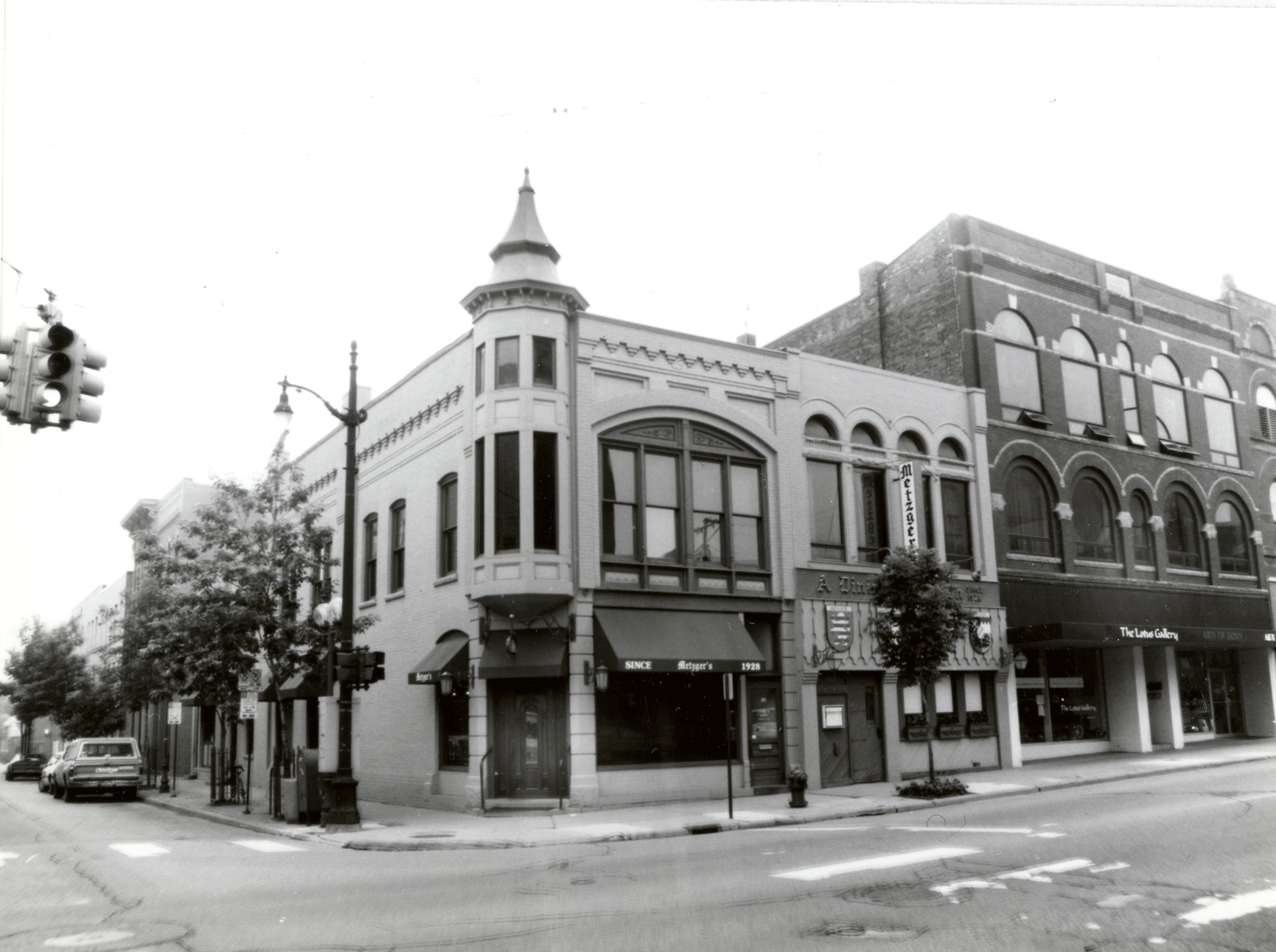 201 East Washington Street Hoelzle Meat Market, 1893 The octagonal corner turret, crowned by a tent-shaped metal roof, has served as the signboard for most of the occupants since the building was built in 1893. The original Hoelzle Meat Market proudly proclaimed its occupation with a cow weather vane crowning the turret. Sun Cleaners and Laundry boarded up the original windows and used the side of the turret for signage. By the 1970s a short-lived business called the Dragon Inn added stripes, described by the Ann Arbor Observer as being "a psychedelic fantasy in wavy red, blue and yellow." The building is a brick structure in the Queen Anne commercial style, with a large arched window taking up the second floor width on the Washington Street side. An 1893 photograph shows the newly finished structure in its original form before the bricks were painted. By 1913 it was Geisendorfer's Meat Market and in the 1930s it was the Washington Meat Market. A large portrait of George Washington was painted at this time on the Fourth Avenue side of the building, and this is probably when the building as a whole was first painted. The small brick addition at the rear along the alley was added by the mid-1930s. By the early 1960s the building housed the Sun Cleaners and Laundry, in the 1970s a gem and mineral store followed briefly by the Dragon Inn. Harry's Army Surplus proved more successful, staying until 1990. Bob Andrus, Jim Davis and Tom White, who purchased the building in 1982, cleaned up the exterior and unblocked the turret windows. Metzger's Restaurant, a next door neighbor since 1936, purchased the building in 1984 and expanded into it in 1991. "Metzger" means butcher in German and thus seems appropriate for this building with its butcher shop heritage. John Metzger, the grandson of William Metzger who opened the restaurant in 1928, attributes the success of the project to architect Paul Green, straw boss Russell Kaercher, and woodworker Wilhelm Roth of Saline (originally from Bavaria). In May of 1991 the Ann Arbor Historic District Commission presented an award to John Metzger for excellent rehabilitation.