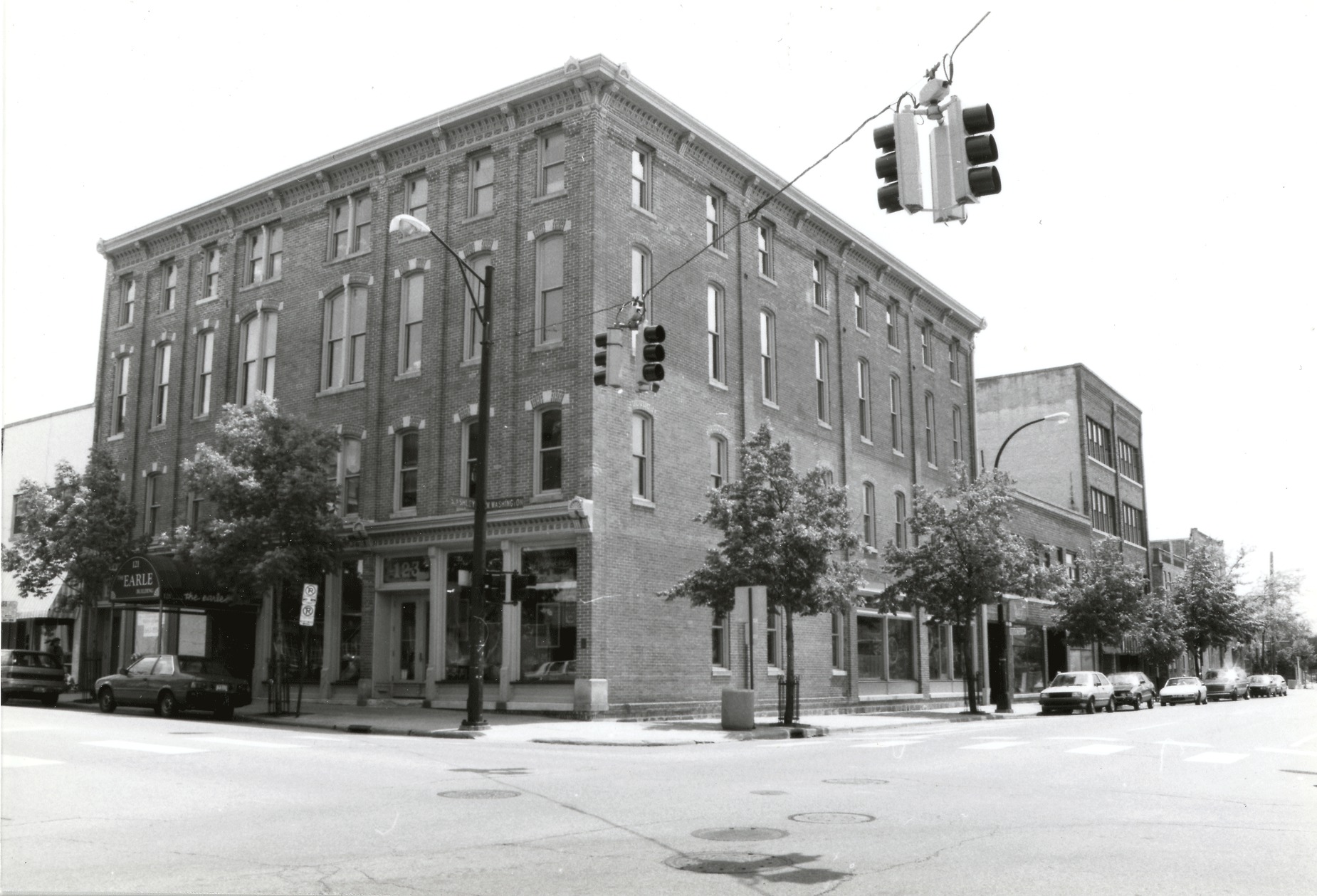 Germania Hotel, 1885
Creator: Schwab, George
Farmer Michael Staebler of Scio Township had timber on his land, so he started a sawmill. He needed coal, so he set up a rural coal yard. He dealt in farm implements, too, and operated a threshing machine, cider press, and a flax seed press. Then he moved to town in 1885, investing his profits in a new building quite impressive by Ann Arbor standards: a hotel that would also house his business offices, while it provided a livelihood for six sons and a son-in-law. George B. Schwab was the architect.

Staebler's Germania Hotel contained the largest "sample rooms" in the state, where traveling salesmen could exhibit sample goods. On the first floor, #119 contained the Staebler coal and farm implement businesses, a saloon and the hotel kitchen were in #121, with the hotel lobby and dining room in #123. Outside on the sidewalk, a ten-ton chunk of coal served as notice of the enterprise within. The high third-story windows belonged to the club rooms of the Germania Verein, where Ann Arbor audiences were often entertained by visiting concert artists.

By 1895 the German society had moved, possibly as a result of financial difficulties. Remodeling replaced the hotel's mansard roof with a fourth story and the clubrooms were divided into guests rooms. The cornice appears to have been moved to the top of the new parapet. The name was changed to the American House. The Staeblers added a bicycle shop and then an automobile dealership. In 1901 they were the only auto agent in Ann Arbor, selling the Toledo car. The Staebler and Son garage building was attached to the rear of the building in 1918 to serve the dealership. Showroom windows were put in the Ashley Street facade in 1927. In 1954 the hotel was renamed the "Earle" after Earl Milner, Ann Arbor native and head of the Milner hotel chain, which leased the place in its declining years. In 1971 code violations forced the hotel's closing.

Ernest Harburg and Rick Burgess purchased the building in 1973 and began renovations and restoration. Paint was stripped from the north and west walls to reveal the natural brick. The three first floor store fronts have been somewhat altered but retain their original proportions and some of their iron trim. Original windows have been replaced. Major alterations were made in 1975 to the basement and first floor to accommodate the Earle Restaurant in the basement level. In 1989, a sidewalk canopy was added to the central entrance. The entire interior has now been handsomely renovated to provide shop space and offices on the first floor, with the Ann Arbor Area Community Foundation and other offices on the upper floors.