And you thought "Lost" was complicated... submitted by lenadams on July 29, 2008, 9:44pm A lot has been written about this debut novel, a lot of which has been better than what I could write. It seems about as many people adore the book as dismiss it out of hand. Nevertheless, I needed to remedy the lack of a review here because if you're a certain kind of reader, you MUST read this book.

"Gist: It's fallen to a club kid named Johnny Truant to organize the manuscript left behind by a dead blind man who called himself Zampano. Zampano's papers are commentary on a documentary film about a spooky house and the secrets it contains. Said house has a "vortex" or something along those lines--it's bigger inside than it is outside. The documentary goes wrong in a "Blair Witch Project" (sorry -- the comparison is inevitable) kind of way, and Truant, upon getting more involved with Zampano's narrative, goes ape-shit crazy.

"Upshot: House of Leaves is a novel that looks more daunting than it actually is. For all its po-mo tricks (faux-academic commentary, footnotes, an index, poems, collages, photos), it is, at its center, a rather basic, and insightful, character study."

I bought my first copy the week it came out almost nine years ago, unaware of what I was getting into but intrigued by the cover, the heft and the odd typography. Little did I know what a rabbit hole I was about to fall down.

This is a story about how things are seldom what they appear to be. Old man, young man, happy couple, sad couple, nice house, anonymous apartment...nothing can be taken for granted. And when the deeply convoluted narrative and deeply disturbed and disturbing characters finally collide in horror, the horrible really is there, waiting for them all.

Fair warning: if self-referentialism drives you batty, do not read this book. And if authorial games and riddles seem cheap and unfair to you (rather than witty and breathtakingly clever), skip ahead to something else (The Bourne Ennui, perhaps?)

Enough people have found the book's density and oddnesses daunting enough that there's an "Idiot's Guide to House of Leaves" on the web (http://markzdanielewski.info/features/guide/index.html) that helps you organize your thinking, even if it doesn't really answer anything.

It's going on a decade now since I read House of Leaves, and I still think of it. A lot. I'm guessing you will as well.


Haunting submitted by kelmu on July 22, 2018, 6:00pm House of Leaves is, in my opinion, a book where you get more out of it the more you put into it. Alone, the book is a good read. If you're willing and able to dig in to the additional material, such as the letters that go along with it, the music made for it, or the online discussions, it gets more interesting.

A worthwhile read if you're ok with things being a little creepy.

The Best Book submitted by Annarborkaren on July 13, 2019, 10:48am This is quite possibly the scariest book ever made. 10/10 would reccomended. 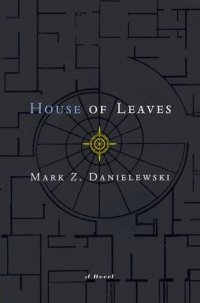