Orange is the new Black : : my Year in a Woman's Prison Engrossing and interesting submitted by marielle on June 26, 2011, 11:39am My mother recommended this book to me, and despite my skepticism I rather enjoyed it. This book is about a woman who goes to prison for a year, 10 years after a youthful indiscretion involving drug trafficking. Piper offers you an uncensored look at what prison life is like, and how cruel drug laws are to poor women.

While my mother and I both liked the book, we didn't like Piper terribly much. She did come off as a bit snotty. But at the same time I respect her for making good use of her time in prison.

Whiney, but interesting submitted by cjkoho on July 25, 2014, 3:05pm My sister recommended this to me as well. I was underwhelmed. Kerman can write and she certainly had the bones for a great story, but the whining... Wasn't there a show on in the 70s where the catchphrase was "Don't do the crime if you can't do the time"? That tagline kept going through my head every time Kerman started whinging about why she was in jail and how hard it was.

I enjoyed her depictions of the people she shared her different cell blocks with. It gave me a new perspective on women's prisons.


Not Great submitted by purplelily on July 31, 2014, 10:05pm I love the netflix series so I thought I would give the book a try. There were a lot of characters in the book so I had trouble keeping track of the names. The story also was choppy so I had trouble understanding some parts. Overall, I like the TV series a lot better

Orange is the New Black submitted by squared_sea on June 14, 2015, 7:44pm I had finished the first season of the tv show and was unable to watch the second season so I read this memoir in hopes of finding any clues as to what happens next. Boy, oh boy, did I learn a lot! Of course the tv show had taken some liberties with the truth, but the memoir is so vastly different from the tv show in so many different ways, you sometimes have to wonder if they're even based on the same central character.

I was engrossed by the book, and was intrigued enough to further research the American prison system.


Great book with good insight - not filthy as I thought might be. submitted by jgetty on July 9, 2015, 5:24pm I haven't watched the TV show because from what I heard from someone, it had some objectionable topics, but I decided to read the original book of the story. To my surprise, I've enjoyed the book and the insight to prison life and the characters in the story. Sometimes, the author makes it sound not-too-bad, but I can't imagine it can be very tolerable in prison. She does mention what I'd hope for in prison and that is to get in great fitness shape and lose weight. I'm finding it very interesting to read after the recent NY prison break-out and the mentions from the author in this book about the stealing, relationships, and the contraband-acquiring taking place, so it's some insight possibly to what was happening at the NY prison. I recommend this book, it's very interesting and not vulgar as I had heard about the TV show, but I haven't watched the TV show.

Interesting Perspectice submitted by Meginator on August 4, 2017, 5:08pm It's problematic that it has taken a wealthy white woman to get the general public interested in the inner workings of women's prisons in the U.S., but here we are. This memoir is fairly well written and contains a lot of stories about different types of experiences- Kerman acknowledges the diversity of the prison population and does seem to genuinely attempt to amplify their voices. Many of the stories will be familiar to fans of the series, although the names and details are different. Overall, this book shares a side of U.S. life many of its readers know nothing about; I appreciated the opportunity to learn more.

Decent read submitted by KOH on August 5, 2017, 9:08pm The show obviously exaggerates the drama, but this is a really interesting story even without the Hollywood twists.

A good read submitted by crp on August 5, 2019, 11:07pm I enjoyed the TV show, so was drawn to read this. It's well written in the narrative/memoir genre. 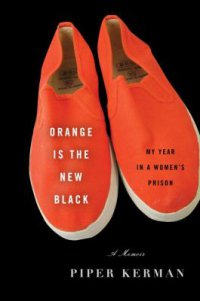