After their father's "research experiment at the British Museum unleashes the Egyptian god Set, Carter and Sadie Kane embark on a dangerous journey across the globe--a quest which brings them ever closer to the truth about their family, and their links to a secret order that has existed since the time of the pharaohs.

Egyptian Percy submitted by marshd on June 30, 2010, 10:59am Essentially, Riordan's new series is a parallel to Percy Jackson and the Olympians. Instead of Greek gods, we get Egyptian ones, and instead of being the children of gods, the main characters are hosts for them. The story still contains a strong boy and girl character, though they are brother and sister this time. It also looks as if the next books will contain recruitment, just as Percy Jackson was recruited. Also, as with his interpretation of the Greek gods, Riordan's explanations of the Egyptian ones are quite well-founded and bordering on pretty darn accurate.

So, if you liked Percy Jackson, you'll like the Kanes as well. The writing style is similarly sassy and amusing. However, if you're looking for something different from Riordan, you won't find it.

red pyramid submitted by foxridgect on June 25, 2011, 2:21pm This time, Riordan wrote an awesome book on egyptian gods, much like the percy jackson series, but they were egyptian instead of greek. Still, it was awesome!

Amazing! submitted by Smiles on July 5, 2011, 9:43pm This book is great! In this book, Carter and Sadie find out about Egyptian gods when their father dies. Will they be able to stop the god of chaos?

Awesome submitted by Morgsush on July 24, 2011, 8:21pm This is an awesome book! Rick Riordan fans, prepare to be amazed.

Terrific! submitted by Memoria1224 on August 9, 2011, 5:14pm This is an awesome action-packed adventure! I recommend it to everyone who likes the Percy Jackson series.

Mythology submitted by krishnansuresh on August 15, 2011, 9:42pm Mythology once again from Rick Riordan! Carter and Sadie Kane unleash the gods out of Duat

Cool! submitted by gabi valderrama on June 24, 2012, 2:55pm I think Rick Riordan is an amazing and talented writer. This edition to the Percy Jackson and Heroes of Olympus series is fun and adventurous, yet educational. The Red Pyramid is a great introduction to the Kane Chronicles, a series in which can't be compared to any other series, because of it's greatness!

Loved it submitted by madeleinebatra on July 2, 2012, 10:34am Awesome start to the Kane chronicles series

Rick Riordan submitted by stkloves on July 3, 2012, 3:23pm I've read a lot of books by Rick Riordan, and this one I loved just as much as the others. The Red Pyramid is filled with action and adventure, it always kept my attention when I read it with the amazing journey Carter and Sadie Kane go on. I love this book because of the character's personalities and because I learn new things about Egyption mythology.

good start submitted by vadnala on July 11, 2012, 4:11pm good start to series, kind of cool like PJO but with Egyptian mythology

Good way to learn submitted by bpascoe on June 17, 2013, 9:15am Rick Riordan does a great job making a book fun to read, but also learning from it too. :D

Nice submitted by alexaeaster on June 17, 2013, 7:09pm This is a good way to prepare for mythology in school.

Greek myths, Egyptian myths, what next? submitted by xiwang on June 30, 2013, 5:35pm Another great book from Riordan, Rick now explores the Egyptian myths instead of the Greek ones. Remarkable kicker to the series.

Awesome series submitted by wendylawrencemorgan on July 9, 2014, 7:24pm I liked this almost better than Percy. Great brother and sister characters, the fast-paced action you expect from Riordan, and really great imaginings of what Egyptian gods would look like if they were still hanging around. Fun.

Sadie & Carter submitted by Alex Hannah on July 25, 2016, 8:52am Isis and Horus are using Sadie and Carter to save the world.I think this is a good book.

Awesome! submitted by Mharrgtn on June 17, 2017, 6:18pm This book was very well written and I cannot wait to read the next in the series.

Fantastic submitted by Margaret Florence on June 21, 2017, 4:50am This book is wonderful. I wouldn't change a single thing about it.

This book is great! submitted by Wonderpantsdance on July 22, 2018, 10:25am I haven’t finished this book yet, but I am already so excited to read the other books in this trilogy!

great book submitted by Sadie Cutler on June 20, 2019, 3:54pm I like that Rick Riordan does stories based on different myths and somehow makes sad things funny at the same time.

awesome series submitted by RowPio on June 24, 2019, 10:02pm this is my favorite series out of all of the series Rick Riordan has written. Sadie is my hero<3.

love this book! submitted by Pia peanut on June 26, 2019, 7:11am My first introduction to Rick Riordan and I owe it much because of that. fantastic story with well thought out characters and awesome mythology. Loved it!

Not as good as Percy Jackson submitted by chowcy on August 28, 2020, 6:05pm Like, I know I shouldn't compare series, but I started reading this because I really enjoyed the Percy Jackson series. This series seems a lot more complicated, and less cohesive. Maybe Egyptian mythology just makes less sense, but I found myself unable to grasp much about Egyptian mythology, whereas reading Percy Jackson helps you absorb Greek Mythology very well.

Red submitted by Archit12 on August 16, 2021, 1:10pm After their father's "research experiment at the British Museum unleashes the Egyptian god Set, Carter and Sadie Kane embark on a dangerous journey across the globe--a quest which brings them ever closer to the truth about their family, and their links to a secret order that has existed since the time of the pharaohs. 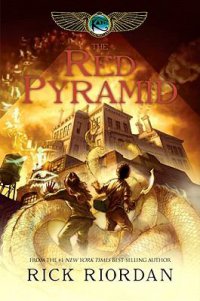