"This visionary novel. in which God and Government are joined, and America is run as a Puritanical Theoracy, can be read as a companion volume to Orwell's 1984-its verso, in fact. It gives you the same degree of chill, even as it suggests the varieties of tyrannical experience; it evokes the same kind of horror even as its mordant wit makes you smile." E.L.Doctorow.

Dystopian to the extreme submitted by yugure on February 27, 2013, 5:29pm A harrowing and claustrophobic but extremely well crafted novel. The injustices described in The Handmaid's Tale are sometimes painful to read, particularly in today's political climate when reproductive freedom is under attack and sexism is still alive and well.

Dystopian Dilemma submitted by mjanen on July 12, 2014, 7:14pm An tough climate with the world in peril is the setting. Surrogate sex is such an odd concept but seems like the norm in this odd world.

Dystopic Beauty submitted by steveiew on August 18, 2015, 10:12am This is a beautifully written book that is incredibly relevant for today.

Surprise: Book better than Film submitted by spinkelman on July 16, 2016, 8:04pm Well, after seeing a bad early 80s version of this in film before having read the book, I was surprised how readable and, well "enjoyable," this tale is. Atwood is sharper than a diamond edge and this is one of her best cuts: read it.

Great submitted by lbootzin on June 16, 2017, 5:25pm Despite the uncomfortable world in which this book is set, it was a very easy read.

For Fans of Atwood submitted by unikitty92 on June 17, 2017, 7:51am This 1985 novel is a classic for fans of the dystopian genre. Although the commentary makes this story a bit eerie, this book reads relatively quickly and easily. I really enjoyed all the characters and how effortlessly Atwood moves the story backward and forward in time. If you enjoyed Oryx and Crake, I would definitely recommend The Handmaid's Tale (and vice versa!).

The Handmaid's Tale submitted by mrondo on June 17, 2017, 10:23pm This is a literary masterpiece that everyone should have to read.
"Nolite te bastardes carborundorum!"

Engaging submitted by aharv on August 3, 2017, 2:35pm An important and engaging work. I was interested from start to finish.

excellent submitted by 21621031390949 on August 25, 2017, 7:46pm Years and years ago, I tried to read this book, but stopped when I found it to be too unrealistic, too depressing. Reading it in 2017 however, it is all too close to potential reality. In our current climate of devaluing and subjugating women, it rings hollowly true.

So real submitted by sheryl205 on July 11, 2018, 8:31pm Reading this book currently feels scarier and more real than reading it years ago. I wish there was more background as to how Gilead came into being and who dreamed up all those details.

Pretty good submitted by zmclaugh on August 15, 2018, 8:33am This is a classic and so for that reason you should read it. Some really chilling moments, but also some moments where I couldn't really connect to the characters.

Relevant today submitted by KOH on August 27, 2018, 3:09pm This book feels timeless. It's a dark dystopia with a sharp witted narrator. I couldn't put it down.

Classic submitted by Susan4Pax -prev. sueij- on June 21, 2019, 10:52pm An absolute classic that I’ve read a few times over the years and just re-read for book club (but missed the discussion). The story continues to be timeless and frightening for how easily Offred’s society shifts from open to suppressed. The singular viewpoint of the narrator still gives a fascinating window into so many aspects of this society, leaving room for both knowledge and questions. Our book club will be watching the 1990 movie, and so many of my coworkers have been talking about the TV show. I think this is important for opening conversations about what is happening in society today. 5 stars, and highly recommended.

HT submitted by crp on August 5, 2019, 11:20pm This is a classic book and I highly recommend it. Some really prescient moments of our current societal state, and I remember thinking how crazy is seemed when I first read it as a kid. Now however I don't think it's so crazy to imagine, and each time I read it there's something new that I notice.

Handmaiden's Tale submitted by Jen Chapin-Smith on August 23, 2019, 2:40pm Although Margaret Atwood wrote this novel decades ago, the urgency of the book's message feels all the more important in our current political climate. The book portrays the hypocrisy of those who police women's bodies and pretend to uphold sexual morality. While pretending to be so pro-life as to kill abortion doctors, the upper class/morality police in this novel also label any child born with a disability as a "unbaby." Such children are disposed of, as if they never existed. The morality police restrict women's sexuality, while also providing women as baby-making machines (or, behind closed doors, as prostitutes) to the upper class. Eventually, the reader will come to realize that in both the novel and our modern-day reality, people who say they are pro-life and for sexual morality really just want to control women's bodies and lives.

Great story submitted by Harlowamy on August 24, 2020, 8:56pm I’m reading this because I’ve watched the show and loved it. It’s just as engaging. I would recommend.

Compelling submitted by saleder on August 28, 2020, 12:50pm It's hard to believe this was written in 1986 - a magnificently written story about a dystopian society. It is dark and depressing at times by nature, so maybe don't pick this one up if you're in a blue mood.

Disturbing submitted by rebecca.perreault on June 16, 2021, 2:39pm I will preface by saying that I loved this book. I finished this book the night before the election 2020, unencouraged and terrified for what the morning would bring. While fictional, the dystopian plot does not feel too irrelevant from our reality. It is dark, combining the most evils of utilitarianism and traditionalism. 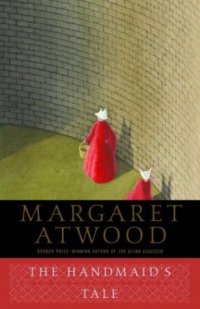