In a society in which books are outlawed, Montag, a regimented fireman in charge of burning the forbidden volumes, meets a revolutionary school teacher who dares to read. Suddenly he finds himself a hunted fugitive, forced to choose not only between two women, but between personal safety and intellectual freedom.

A classic submitted by Daniel Saltzman on January 4, 2010, 2:38pm A book about book-burning and universal conformity that has ironically occasionally been banned and even burned. If you loved 1984, you'll love this.

Wow submitted by xjasx on June 16, 2012, 11:19pm I was kind of iffy on this book at first, but since my friend recommended it to me I finished reading it and I'm glad I did

Amazing submitted by fdaudi on June 20, 2012, 8:22pm I read this when I was in high school and I didn't realize how profound of a topic it covered. Bradbury has written on a subject matter that will stand the test of time. Phenomenal writing and book that should be read by all.

Great book submitted by njdsilva on July 16, 2012, 12:52pm I enjoyed this book, but the end can be slightly maddening.

Choppy submitted by KaileyH20 on June 23, 2014, 7:51am I remember having to read this as a freshman in high school, and decided to come back to it again as an adult, thinking I could better understand what Bradbury was saying in the book. It didn't stick with me back then--the concept was more memorable than what the book actual said--and it still strikes me that way. The major events in the book are very cut-and-dry in the way they happen, and are wrapped up very neatly. While not a bad book, it is just a little bit too clean for my liking.

a cultural icon submitted by hathaway1066 on July 14, 2014, 7:23pm This book is a fine example of sci fi's ability to not only project into the future, but comment on current aspects of society--or maybe it always does that? Censorship and societal control and resistance to such control are core themes. If you see our world as subject to 'management' by the PTB, you could do worse that to dip into this and add its take on such to your 'mental library' on the topic. (That's a bit of a spoiler, but I hope not too much so.)

A classic submitted by mickplu on July 21, 2016, 9:05pm A classic that is still highly relevant as it deals with book burning in a sci fi manner.

Classic Critique submitted by Meginator on August 14, 2017, 2:55pm Fahrenheit 451 is a classic for a reason, even though bits of it are a bit clunky by today's literary standards. Still, the critiques of censorship and mass media's tendency to hypnotize the masses are as relevant as ever and the book is a quick and compelling read.

Finally read this classic submitted by Xris on June 19, 2018, 9:46pm Interesting that books were banned and people were encouraged to watch stupid shows on TV. Glad I read it!

Apart from dealing with fascinating themes and characters, I was really interested in the actual style of the novel. It’s written in a rushed, stream of consciousness fashion, which lends to a very quick read. Bradbury apparently wrote the first draft of the novel in nine days, so that makes sense, but I also feel that it makes sense in the context of the story. In Bradbury’s dystopic future, everything is about instant gratification. People are supposed to be overwhelmed with meaningless activity, whether it be careening down a highway or focusing completely on a television show. Nobody takes the time to slow down, to contemplate - and the ones that do are ostracised and considered potential traitors. Given this, the hurried nature of the text lends an extra element to the story. You want to just bulldoze your way through, as the writing (and that world) demands.


The Best submitted by lstorc on August 27, 2018, 2:55pm True to Ray Bradbury, this novel is palpable in its details the provides a competent synopsis of the human experience. 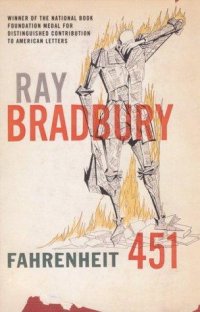