Slavery by Another Name : : the Re-Enslavement of Black People in America From the Civil War to World War II New South rising : "This great corporation." 12.
17. Epilogue : The ephemera of catastrophe.
A sobering account of a little-known crime against African Americans, and the insidious legacy of racism that reverberates today. From the aftermath of the Civil War through the dawn of World War II, under laws enacted specifically to intimidate blacks, tens of thousands of African Americans were arbitrarily arrested, hit with outrageous fines, and charged for the costs of their own arrests. With no means to pay these "debts," prisoners were sold as forced laborers to coal mines, lumber camps, brickyards, railroads, quarries, and farm plantations. Thousands of other African Americans were simply seized and compelled into years of involuntary servitude. Armies of "free" black men labored without compensation, were repeatedly bought and sold, and were forced through beatings and physical torture to do the bidding of white masters for decades after the official abolition of American slavery.--From publisher description. 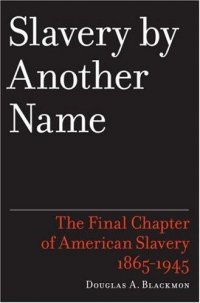