In a future world where those between the ages of thirteen and eighteen can have their lives "unwound" and their body parts harvested for use by others, three teens go to extreme lengths to uphold their beliefs--and, perhaps, save their own lives.

Unwind - creepy wonderful submitted by brielle on August 27, 2010, 10:59am This is a really creepy, wonderful book about a futuristic America after its second civil war.

Unwind submitted by flora on December 23, 2010, 4:54pm Connor, Risa, and Levi are teenagers in a not-too-distant future in which parents can decide to retroactively abort their children between the ages of thirteen and eighteen through a process called unwinding. Unwinding, a compromise the ended a civil war between pro-life and pro-choice factions, is a process of disassembling a person so that each of their body parts can go to someone else (but it is not considered killing, since the each part of the unwound person goes on living in someone else). In this world, so many teens are unwound that ailments are fixed through transplants rather than medicines or other therapies. Connor, Risa, and Levi have each been scheduled to be unwound for one reason or another, but Connor’s high-profile escape leads to their joining up as runaways.

Unwind passes the narration between Connor, Risa, Levi, and a few secondary characters, as indicated by chapter headings. Although it may take some getting used to, this narrative method lets readers into the motives of the characters and the changes they go through in their attempts to escape, survive, and make sense of the world.

While it’s hard to imagine anyone--regardless of their position on abortion--who would support unwinding, it makes for a provocative premise without glorifying either side of the abortion issue. Instead, Unwind asks questions: Could our society ever adopt and embrace a practice like unwinding? What is life, when does it start and end, and who decides? When is it okay to break the law? Teens may or may not think they have the answers, but they will certainly ask these kinds of questions and many more of their own.

Unwind gives readers a lot to think about while also telling a compelling, exciting, and highly disturbing story.


Terrifying. submitted by miss pyro on June 29, 2011, 1:16pm If you don't want to sleep, read this. The ideas are scary, thinking about what America could come to. I didn't sleep the night after I read this. This is the only book that has done that. I suggest reading it in the morning or while other people are around. Not a book to read while you're alone.

Creepy but great submitted by xjasx on June 17, 2012, 10:19pm Wow this book is awesome. So great. I would read it again. But just not at night time xD

Middle way submitted by jmock on July 24, 2012, 9:13pm I think that the way that the book treated "unwinding" so ostentatiously yet acted like it was a "normal" thing in that era to some people really did not appeal to me. It didn't seem real, so I couldn't believe what was presented. The fact that the language used in the dialogue was so strange, including the word "unwind" which was not worked into slang very elegantly was another factor that made me put it down.

I the idea in and of itself seems very interesting, which is how I got to the book in the first place, but it was very bad overall.

amazing submitted by yliu4 on July 7, 2013, 8:58am After I finished Hunger Games and the Divergent books I was looking for something similar. Some hunting online lead me to give this one a shot. It was simply incredible. I couldn't put it down, and the premise has a lasting impact on you. It really makes you think, and it's kind of scary. I really really REALLY want to read the next book, but unfortunately this library doesn't have it!!!

Great Book!! submitted by gxl on July 26, 2013, 8:17pm This book is really great. It contains romance, suspense, mystery, etc. Everything in one book!! The plot is really great. What if you had to be unwound? What would you do? Follow these three kids on a thrilling adventure!!

Creepy submitted by Lucy S on July 26, 2014, 2:29pm But good. I really enjoyed this different spin on the dystopian novel.

Quality, thought-provoking YA submitted by sueij on August 8, 2015, 8:58pm This is the first dystopian YA that I have *really* enjoyed in a while.

It doesn't turn every adult into a villain. It doesn't have hormonal teens figuring it all out and saving the world through their independent, brilliant, heroic action. What it does have is a completely messed up world (that's the dystopian part) with a bunch of young people making both good and bad decisions, living with them, dealing with social pressures, and trying to survive. Several adults who think the world is messed up and trying to make a difference. Decisions that sometimes make a difference. People who learn and grow. Emotions that get out-of-whack, impulsive actions that change the course of events, relationships that become important. The world is well thought out and presented well, so that what we learn throughout the story comes back and enriches (or is necessary for) events later.

It's the first dystopian YA I've read since _The Hunger Games_ where I not only am planning to read the rest of the series, but actually got the next one out of the library already.

Scary but good submitted by jessicazhang on June 18, 2016, 4:29pm The books is extremely well written and interesting, but gives me the chills

great book submitted by jkretzsch on June 23, 2016, 10:25am super creepy but still awesome

Awesome submitted by mkwhybark on July 15, 2017, 9:58am It's really good yet also makes us think about our society and its positives and negatives.

The. Best. submitted by mrajraspn08 on August 19, 2018, 3:10pm One of my favorite books and my favorite series and my favorite author--I've actually read each book several times and purchased them all, which I never do. Throughout, it really makes you think, while also telling a very good and compelling story. I also tell people that, even if the first few books aren't your favorite, the series conclusion is well worth it.

Unwind submitted by i'm a blobfish on June 15, 2019, 7:26pm So good! The concept of unwind is that instead of abortion, you raise the unwanted child to a teenager and at this point you can decide if you want to "dispose" of them or not. Most of the child is re-purposed for transplants and such. Follow the story of three children, all unwinds. Connor is a problem child. Risa is a ward of the state, not talented enough to be kept in one piece. Levi is a sacrifice, a holy being ready to return to god, or as he tells himself. Follow the unwinds as they explore the meaning of life and the boundaries of good and bad. Read if you are fine with dystopian settings.

Hard to put down submitted by lqwang on July 22, 2021, 8:28pm Interesting premise and so easy to binge read.

Un-put-down-able! submitted by graytabby on August 1, 2021, 9:52pm In this amazing book, Connor, Risa, and Lev navigate a dystopian world where teens' parents are given the choice to get their children unwound, or have parts ripped out of their body and given to people who need them. It's creepy, but it's a must-read. 5 out of 5. 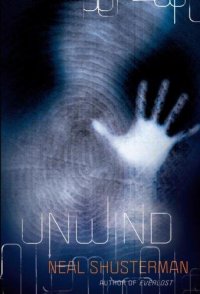