Chasing the Scream : : the First and Last Days of the war on Drugs Mount Rushmore. The Black Hand ; Sunshine and weaklings ; The barrel of Harry's gun ; The bullet at the birth -- Ghosts. Souls of mischief ; Hard to be Harry ; Mushrooms -- Angels. State of shame ; Bart Simpson and the Angel of Juárez ; Marisela's long march -- The temple. The grieving mongoose ; Terminal city ; Batman's bad call -- Peace. The drug addicts' uprising ; Snowfall and strengthening ; The Spirit of '74 ; The man in the well ; High noon -- If you are alone.
"January, 2015 will mark a century of the war on drugs in the United States: one hundred years since the first arrests under the Harrison Act. Facing down this anniversary, Johann Hari was witnessing a close relative and an ex-boyfriend bottoming out on cocaine and heroin. But what was the big picture in the war on drugs? Why does it continue, when most people now think it has failed? The reporter set out on a two-year, 20,000-mile journey through the theater of this war--to find out how it began, how it has affected people around the world, and how we can move beyond it. Chasing the Scream is fueled by dramatic personal stories of the people he meets along the way: A transsexual crack dealer in Brooklyn who wanted to know who killed her mother, and a mother in Mexico who spent years tracking her daughter's murderer across the desert. A child smuggled out of the Jewish ghetto during the Holocaust who helped unlock the scientific secrets of addiction. A doctor who pushed the decriminalization in Portugal of all drugs - from cannabis to crack. The title itself comes from a formative story of Harry Anslinger, first commissioner of the Federal Bureau of Narcotics, sent as a boy to the pharmacy for a neighbor screaming in withdrawal -- an experience which led him to fear drugs without regard to context. Always we come back to the front lines in the U.S., where we instigated the war and exported it around the globe, but where change is also coming. Powerful, propulsive, and persuasive, Chasing the Scream is the page-turning story of a century-long mistake, which shows us the way to a more humane future"-- Provided by publisher. 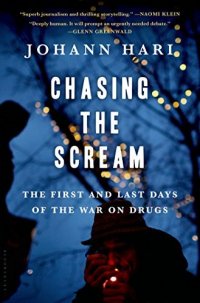