A Tale of two Cities After eighteen years as a political prisoner in the Bastille, the aging Doctor Manette is finally released and reunited with his daughter in England. There the lives of two very different men, Charles Darnay, an exiled French aristocrat, and Sydney Carton, a disreputable but brilliant English lawyer, become enmeshed through their love for Lucie Manette. From the tranquil roads of London, they are drawn against their will to the vengeful, bloodstained streets of Paris at the height of the Reign of Terror, and they soon fall under the lethal shadow of La Guillotine. This edition uses the text as it appeared in its first serial publication in 1859 to convey the full scope of Dickens's vision, and includes the original illustrations by H.K. Browne ('Phiz'). Richard Maxwell's introduction discusses the intricate interweaving of epic drama with personal tragedy.

Dickens at His Finest submitted by rleer24 on July 1, 2008, 2:39pm Most people have read A Tale of Two Cities, but for those that haven't this is a classic that should be read. I, for one, was not a fan of Greater Expectations, and as that was my first taste of Dickens I was rather wary when I was presented with AToTC in my sophomore English class. Nevertheless, I found the book to be gripping. Not only did you have trials and tribulations within the first five chapters, but you had the ever-looming shadow of the Revolution growing throughout the book until the fury of the impoverished explodes.

One of my favorite sections of the book is the part in which Monseigneur takes his morning chocolate. I must admit, I laughed outright at the following text:

"Monseigneur, one of the great lords in power at the Court, held his fortnightly reception in his grand hotel in Paris. Monseigneur was in his inner room, his sanctuary of sanctuaries, the Holiest of Holiests to the crowd of worshippers in the suite of rooms without. Monseigneur was about to take his chocolate. Monseigneur could swallow a great many things with ease, and was by some few sullen minds supposed to be rather rapidly swallowing France; but, his morning's chocolate could not so much as get into the throat of Monseigneur, without the aid of four strong men besides the Cook.

Yes. It took four men, all four ablaze with gorgeous decoration, and the Chief of them unable to exist with fewer than two gold watches in his pocket, emulative of the noble and chaste fashion set by Monseigneur, to conduct the happy chocolate to Monseigneur's lips. One lacquey carried the chocolate-pot into the sacred presence; a second, milled and frothed the chocolate with the little instrument he bore for that function; a third, presented the favoured napkin; a fourth (he of the two gold watches), poured the chocolate out. It was impossible for Monseigneur to dispense with one of these attendants on the chocolate and hold his high place under the admiring Heavens. Deep would have been the blot upon his escutcheon if his chocolate had been ignobly waited on by only three men; he must have died of two."

For those who are only used to contemporary writing styles, Dickens may seem complicated, but it is well worth the effort to struggle through the text. (For those of us who love Dickens's style, this book is a treat).

This is a must-read (I personally think it should be on every high school reading list). Happy reading, everyone!


Chapter 13 or Bust submitted by Sara W on July 1, 2011, 8:16pm I think that Dickens is best at expressing himself with humor, and that approach doesn't lend itself to this epic about the French Revolution. While his history and his characterization of the revolutionaries is pretty flawed, it really doesn't affect my enjoyment of the book.

When I first read this book, I nearly gave up because of the language and Dickens' roundabout writing style and stock characters and ugh - just everything. But then I hit Chapter 13. Oh, Chapter 13. You have been the last dream of my soul!

It all changes for me after Chapter 13, even after multiple reads.

Unpopular opinion submitted by ginarae3 on August 8, 2014, 8:13pm Sorry Charles, this sucked. It was the worst of times. The end.

T2TC submitted by Fishing Rainbow on June 12, 2015, 10:46am A Tale of two cities is a classic for a reason. I think that everyone should read it at least once in their lifetime.

Good submitted by zmclaugh on July 20, 2018, 8:38pm Dickens can be wordy and hard to get through. At first I hated this book. Then, suddenly it got super dramatic and there was a lot going on and then I loved it.

Extensive book worth reading submitted by tcrbondy on August 4, 2018, 6:35pm I had to read this in school but it is a classic. Read it for a respect of literature, not for entertainment

One of my favorite Dickens' books submitted by KatieD on August 6, 2021, 3:26pm I read this book in high school and loved it, while most of my friends hated it. I reread it this year and found that I still enjoy it! It's a timeless tale of love and sacrifice, set against the backdrop of the French Revolution and the Reign of Terror. it has the usual twists and surprises of a Dicken's novel and definitely has some suspenseful moments. Highly recommend!

Classic novel of the French Revolution submitted by vickik on July 27, 2022, 10:43am If your only experience with A Tale of Two Cities was of being forced to read it in high school, it's definitely worth re-reading. It's a wonderful novel set during the French Revolution (unusual for Dickens), with unforgettable characters such as the good-natured rogue Sydney Carton and the bloodthirsty, villainous Madame Defarge. 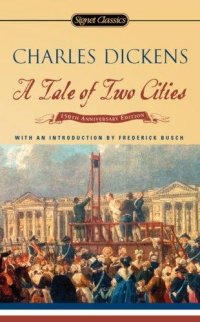