A tale of true love and high adventure, pirates, princesses, giants, miracles, fencing, and a frightening assortment of wild beasts.

movie better then the book submitted by ferdoble on July 31, 2011, 9:56pm This is a great book. Its a little bit hard to get into on account of the story within the story, but it is still very good.

Its a little bit difficult to tell what is going on and what if anything is real. The author tells a contemporary story about himself and his life and at the same time he weaves in the store of the princess bride as you know and love it from the movie.

It turns out that this is one of the rare times that a movie ends up capturing to story quite a lot better then the book, but I still recommend it.


book better than the movie submitted by Jan Wolter on July 7, 2013, 9:36pm I first read this book back long before there was a movie. I was a bit annoyed that William Goldman had cut out most of S. Morgenstern's original novel, except for the "good bits" but I liked the good bits immensely. Eventually I grew suspicious and checked "Who's Who" (this was before the Internet, kiddos) and discovered that William Goldman had daughters but not a son, which meant that the frame story was a much a fantasy as the all the rest of it. I was delighted to have been taken in. I proceeded to loan the book out to all sorts of people, including my brother who, in turn, loaned it out to another young Chevron geologist who ripped the cover off. It seems he was heading out to an oil rig on a crew boat, and didn't want the workers seeing him reading a book called "The Princess Bride" but also didn't want to put the book down, so ripping the cover off was the only alternative. I understood perfectly.

When the movie came out, I was moderately pleased that they hadn't completely ruined it. They'd made the frame story stupider, and no special effects could possibly live up to the way my imagination painted the story, but they kept enough of the good bits for it to be recognizable. It's a pity that people who've seen the movie before reading the book will be stuck with imagining Miracle Max as Billy Crystal in crappy makeup, Buttercup slightly less than perfectly beautiful, and the R.O.U.S. as not particularly scary, but at least they have the exact right image of Inigo Montoya. I can see where people who saw the movie first might be confused by the book, and miss out on it's great ability to call out a world of wonder from your imagination, so if you've already seen the movie, sorry, but the book really is better.


Great! submitted by Zekicmom on July 13, 2013, 11:13pm I was given this book in college and have loved it ever since. Definitely better than the movie.

A laugh-out loud adventure submitted by miss banana peel on June 18, 2015, 2:57pm Fantastic, humerous, riveting, and everything else a book should be. So much better than the movie!!

Two Thumbs Up (For Book and Movie) submitted by Avliss on June 27, 2016, 12:02pm This is one of those rare stories that thrives on the big screen AND on the page, with each format having its own strengths. I was a little leery about reading this because I, like many others I'm sure, saw the movie first. But I found it just as fun and ridiculous, albeit in a slightly different way. The little asides, both from the 'original' author, Morgenstern, and Goldman add another level of hilarity. And while I do like the fact that the film downplayed the fairy-tale ridiculousness of Buttercup and Westley's relationship, it had me snorting in laughter throughout the book.

A Classic submitted by obennett on July 1, 2016, 10:39am If, like many others I know, you have only seen the movie and never read the book, please give the book a read!

Both versions are wonderful, but the book definitely has some dark humor and character flaws that the movie left out. The book also has a lot of interesting background stories to add to your knowledge of the characters.

It's a great story overall.

Fantastic submitted by SolaireFQ on August 27, 2016, 11:33am This book is great. It feel different from the movie, so don't expect the same thing going in. Well worth reading.

Inconceivably Good submitted by Meginator on June 26, 2017, 9:37am Like many others, I read this book after being intimately familiar with the movie adaptation. I agree that this is a rare case where the movie is just as good as the book, and captures the same spirit in a different medium.

As for the book itself, it is laugh-out-loud hilarious and a brilliant comedic send-up (and, like the best parodies, a wholly convincing rendition) of the type of swashbuckling adventure fiction that dwells just at the edges of fantasy. The story works both as a parody and as its own thing, and Golding's approach clearly comes from a place of admiration; the jabs are gentle and, to be honest, warranted. Readers may be laughing, but only the hardest of hearts won't melt by story's end. Golding takes the genre's best and worst elements and fuses them into a story, characters, and (vaguely European) setting that surpass all but the very best. The humor is dry and intelligent and unrelenting, and the pages fly by.

Nor do you have to be a huge fan of this type of fiction to appreciate "The Princess Bride." The characters are compelling and have engaging backstories that elevate them beyond mere tropes. The framing narratives from the introduction(s) are a bit long-winded, but are themselves an important framing device for what follows. Afterwards, the book reads quickly and easily. This is how comedic fantasy should be done.

Pretty good submitted by zmclaugh on July 27, 2018, 7:46pm This is a case where the movie might actually be better than the book. The book has a very different tone from the movie and contains some things I didn't need. Give it a read if you're a big fan of the movie, though.

A fun read submitted by majean on August 17, 2018, 8:09pm The book is a little different from the movie. Both are enjoyable and so quotable!

Wonderful book submitted by Gloriawhitebellm on July 3, 2019, 4:49pm I watched the movie first because it was suggested to me by a couple of my middle-school friends, I immediately fell in love with the movie, and I loved the book equally. Although it is a classic, people of any age can (and should) read this adventure love story. <3

The Princess Bride submitted by leighsprauer on April 20, 2020, 3:04pm I've had a copy of this book for years (maybe 30?) but apparently this was the first time I actually read it. I should have read it sooner. Like everyone else on earth, I adore the movie. And this might be one of those cases in which the movie is better than the book, but it's hard to say.
The book (and movie) are about True Love, and that's all I really need to say about it, because a love story is a love story. Or rather, all good love stories are just re-tellings of the Love Story. When I watched the movie as a kid, I enjoyed it as an action movie, but then my mom made us watch it again immediately, and had us imagine that Westley was Christ and Buttercup was the Church. It mostly works, especially if you consider Miracle Max to be God the Father. (And why wouldn't you?) Buttercup is much less likable in the book than in the movie - not very bright, and much more fickle and prone to mistakes, and the book's humor is a bit darker than the movie's. But the book also includes this fantastic exchange between Westley and Buttercup describing a time after Westley took the resurrection pill: Westley: 'I suppose I was dying again, so I asked the Lord of Permanent Affection for the strength to live the day...' Buttercup: ' I didn't know there was such a Fellow.' Westley: ' Neither did I, in truth, but if He didn't exist, I didn't much want to either.' It really makes me wonder what Goldman's beliefs are. On the one hand, he's gently mocking Westley & Buttercup's love (and therefore maybe mocking True Love itself), with his over-dramatization and sarcastic humor, but on the other hand, True Love does win in the end. It's an interesting juxtaposition.
Even if you don't buy into the Christ analogy, the book is still just really, really good. Goldman is funny, both in the extensive prologue and in the book itself, and the story is very entertaining.

Just as good as the movie submitted by gknitter on June 11, 2021, 10:10pm I had very high expectations for the book (because who hasn't seen and loved the movie?) and it certainly met the mark. The further details that this telling provides are so compelling and add to the already known story in such a great way. 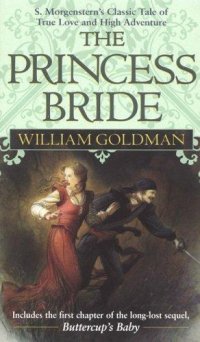