Eleven-year-old Alanna, who aspires to be a knight even though she is a girl, disguises herself as a boy to become a royal page, learning many hard lessons along her path to high adventure. "From now on I'm Alan of Trebond, the younger twin. I'll be a knight." And so young Alanna of Trebond begins the journey to knighthood. Though a girl, Alanna has always craved the adventure and daring allowed only for boys; her twin brother, Thom, yearns to learn the art of magic. So one day they decide to switch places: Disguised as a girl, Thom heads for the convent to learn magic; Alanna, pretending to be a boy, is on her way to the castle of King Roald to begin her training as a page. But the road to knighthood is not an easy one. As Alanna masters the skills necessary for battle, she must also learn to control her heart and to discern her enemies from her allies. Filled with swords and sorcery, adventure and intrigue, good and evil, Alanna's first adventure begins -- one that will leard to the fulfillment of her dreams and the magical destiny that will make her a legend in her land. Alanna's journey continues.

Endearing submitted by marshd on May 2, 2010, 2:58pm The first book of the Song of the Lioness series is absolutely adorable. It is great for anyone who likes a heroine, or any girl that is coming of age.

The novel is fantastically written, aside from the numerous typos a careless editor glossed over, and the story and characters are both interesting and assertive.

I recommend this book for anyone who is interested in fantasy--even a little bit. It is not overwhelmed with magic like many fantasies are, and almost anyone can relate to it.


Still Delightful submitted by chuntoon on July 3, 2012, 11:59pm It's hard to believe that this lovely novel was written almost 30 years ago... it manages to feel fresh and relatable (taking place in a fictional world probably helps!).

The first book in the Song of the Lioness quartet, Alanna: The First Adventure follows Alanna (bet you could have figured that out!) as she cross-dresses to take her twin brother's place to begin training as a knight. Alanna wrestles with hiding her sex, learning how to be a knight, and earning friends (and enemies). A great beginning to a wonderful series.


Not Bad submitted by smariej on August 7, 2012, 5:23pm I really like Tamora Pierce, even if she does write for a much younger age group than my own. I didn't like how quickly the character ages in this book, however. About 4-5 years in only 200 or so pages. There could have been much more detail about the character's daily life and emotional development.

Great! submitted by LC Smalls on August 10, 2013, 4:39pm This was one of my favorite books when I was in high school. Highly recommended.

Awesome Read submitted by audreyh on June 12, 2015, 12:41pm I read the Song of the Lioness books back when I was a teenager. I'm so glad I stumbled onto Pierce! Her stories are compelling, and she was one of the first writers I encountered who treated her female characters like they were just as good as the guys. This is the first book Pierce published, and they only get better from here.

A good formula submitted by ssands on July 2, 2015, 3:25pm Fast-paced and fun. Although it follows a formula, sometimes that's exactly what you want to read. Parts of the plot are obvious and that sets your mind wondering how the author will deal with the details of this or that problem, rather than exploding your world-view. It's the kind of book that is the antidote to a bad day. Perhaps for that reason, I liked this best of the series.

Alanna submitted by kathscot on August 30, 2017, 9:50am An interesting character in an exciting story. Recommended.

Great submitted by anacoluthon on July 20, 2018, 1:57am The first book of Tamora Pierce's first series! It's not her strongest series, but there's no such thing as a bad Tamora Pierce book.

Good submitted by zmclaugh on July 29, 2018, 10:51am This is a classic. Reading Pierce's other books, it's clear that this is her first, and there are definitely some parts that could be smoothed out. But it's still a classic and you should read it.

Love Tamora Pierce submitted by MelCat6 on August 24, 2018, 6:18pm I've now read nearly everything that Tamora has written, and I just love her books. They have very interesting characters that I get invested in. Her world, Tortall, has the most books written about it and starts right here, with this book. It is a huge world that ends up spanning generations of characters.

Amazing! submitted by eliadler on June 14, 2019, 9:22pm I wasn’t sure at first what i thought about this book, but I am really glad I read it. Alanna (or Alan) is a very relatable character, and it is a very fun read. The way the author changes perspective is a bit confusing at first, but you will get used to it.

Excellent book submitted by melissahimich on June 17, 2019, 11:24am I started off reading Wild Magic and really liked it. This book is the first of the series prior to those. Just as good!

Great Beginner Fantasy for Teens submitted by MollyWiding on July 31, 2020, 3:50pm This was one of the first series I really got into in middle school. It's enjoyable, funny, has good commentary on gender roles, and is a great introductory fantasy novel for younger girls. 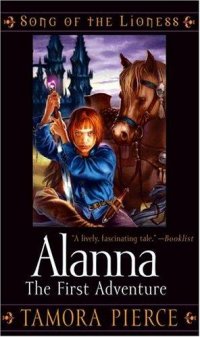 SERIES
Song of the lioness
1.