The Ocean at the end of the Lane It began for our narrator forty years ago when the family lodger stole their car and committed suicide in it, stirring up ancient powers best left undisturbed. Dark creatures from beyond the world are on the loose, and it will take everything our narrator has just to stay alive: there is primal horror here, and menace unleashed - within his family and from the forces that have gathered to destroy it. His only defense is three women, on a farm at the end of the lane. The youngest of them claims that her duckpond is ocean. The oldest can remember the Big Bang.

A Trip Between the World submitted by Jan Wolter on June 20, 2013, 8:16pm This is a book about childhood, but not a children's book. You shouldn't need to say it isn't, but a fantasy story with a child as the main character tends to be taken as a children's books, even if it is woven out of childhood nightmares and has the kind of ending that no child would be content with. I'm content with it. I liked being taken back to a world where adult behavior is inexplicable and weird, and childish behavior makes perfect sense. Not my favorite Gaiman book, but worth reading.

Well worth the wait submitted by allishaklausch on July 10, 2013, 8:52am This was an amazing book. It had the dream-like quality that Gaiman's other books have, but through the eyes of a kid. It brought back memories of exploring around outside when I was younger.

Scary for Kids, but I Loved It! submitted by crazypockets on July 27, 2013, 3:10pm This book made me realize how shameful it is that I haven't read more of Neil Gaiman's writing. He. Is. Amazing. I loved reading this story on so many levels. First, it's just a wonderful fairy tale that I think young adults would like. It's not really a story for children, though I'm sure if they make a movie of it (please let them make a movie of it!), it'll be marketed that way. I think there are some very scary elements to it (when I was a kid, the scene with the bathtub would've traumatized me for life).

But more than a young adult book, I think this is really meant for adults who need to remember what it feels like to be a very small child. I'm in awe of how Mr. Gaiman can so easily tap into those elements that are so fundamental to childhood...things that most people, and most definitely I have forgotten. It all came flooding back reading this (much in the way that the main character's memories come back to him when he sits beside the "ocean"): the isolation, the "irrational" fears, the way your parents were the center of your universe and how terrifying it was to have anything threaten that balance (this was a common fear of mine as a child: that something scary would be happening and my parents would either not believe me or would become a part of whatever it was). But more than that, the really good things about being a kid are represented here: the simple pleasures of a delicious meal, a day spent in a special place with a good book, a cozy room with a flickering fireplace and a squooshy bed, the comfort of those certain adults and friends who can make you feel safe just by being there and telling all the scary things they have no power over them.

This is a wonderful story that will chill you and then warm you up again in the same page. The imagery is so real and easy to picture, I can't see how they could not make a movie out of this.... It taps into so many truths about the way things work, the way we overcome our most basic fears, and the way we remember the events of our lives.


Creepy Fun submitted by sdunav on August 9, 2013, 2:43pm .... about an alternate world that exists alongside ours, and how it impacts a seven year old boy. The back cover of the dust jacket has a great photo of the author as a child that really fits in with the story.

Gaiman's descriptions of childhood fears, his quintessentially English house and garden and the neighboring farms, and the people (and/or beings) the main character encounters are superb. Now imagine a supernatural Guinea worm in your foot....


Brought tears to my eyes. submitted by eknapp on August 20, 2013, 10:46pm A seven-year-old boy's new nanny has bewitched his family and only he can see the monster she truly is. His only allies are a trio of strange, friendly women at a nearby farm.

In the first chapter, the protagonist as a middle-aged man visits his childhood home for a funeral, and it's BORING...which accents the utter richness and simplicity and innocence of childhood when memory comes crashing in on him. It's like that moment when Dorothy steps out of her black-and-white house and everything is in color.

It's a powerful illustration of childhood. He's sad that no one shows up at his birthday party but he's even happier to be able to bury his nose in a book. He knows that "naked" is bad, although he doesn't really understand why. He knows that children explore but adults take paths and always know what to do. He is confused that grownups take wonderful delicious things like peas and put them in cans and make them repulsive, and he has simple faith that his new friends will protect him when the monsters come.

It reminded me strongly of Coraline at first: a bright young child's family is endangered by a sneaky supernatural fiend, and adults won't or can't help. But where Coraline is about empowerment, Ocean is simply an acknowledgment of the wonder and terror of being a child.

Reading The Ocean at the End of the Lane really made me relive my own childhood...Gaiman tapped into some magic when he wrote this.

A Modern Fairy Tale submitted by Christina on June 14, 2014, 4:12pm I think the casual reader will find this book very enjoyable. It is fantastical and frankly, quite frightening; I don't remember the last time I became legitimately scared while reading.

However, the more I think about the book, the more I am struck by how deep it is - I imagine English teachers simply adore this book. Neil Gaiman is a masterful writer - the story is rife with archetypes such as the triple goddess (maiden, mother, and crone as one) and water (the ocean) as a symbol of the unconsciousness, elements which render it powerful and meaningful.

Highly recommended submitted by sueij on June 27, 2014, 1:53pm Gaiman writes fantasy about things that go bump in the night. This one is shorter than most... but it's amazing. You read it wondering what it is that you don't know about the world around you.

Fantastic submitted by romanticmind on July 14, 2014, 11:31am I agree with the reviewers that say this is a book about a child's life, but not a book for children. I didn't find it scary (and I'm easily scared) but I think children would, and it deals with some adult themes. That being said, I loved the magic in the book--Gaiman's writing style was vivid and colorful and really brought the world to life for me. I couldn't put this book down!

Incredible submitted by Lydiaroses on June 12, 2015, 11:30am This is a very sweet book. It is a quick read, but it is very beautiful and very sweet. I highly recommend this book.

Lovely submitted by jgzhang on August 3, 2015, 12:23am This is the second Neil Gaiman book I've ever read (first one was Coraline, which I wasn't super fond of), and this has definitely made me a fan. Such an achingly beautiful story that I'm confident will stand the test of time. Somehow, it feels like this tale of childhood, magic, and memories has existed forever—that's how wonderfully universal it is.

Not What They Seem submitted by Judeyblu on August 31, 2015, 9:29pm This taps into childhood- when we couldn't explain what we saw to anyone.
For our hero, things aren't always what they seem, and he finds help in the unlikeliest places.

Terrific book! submitted by obennett on July 2, 2016, 5:47pm A fantastic magical tale, with all the dark twists you expect from Neil Gaiman. A lot of the magic is not explained, so it's not for people who want to know the why behind everything, but if you want a strange and wondrous tale this is a great read.

Messing with my memory submitted by cannonsr on August 5, 2016, 2:17pm Gaiman is such a story teller. Another fantastical yarn, with threads that will tease my mind in the months to come.

fantasy, sci fi submitted by 21621031390949 on June 23, 2017, 10:30pm I stumbled upon this book as I was browsing the list of audio books available at my library. I'm so glad I did! It's a good book - fun fantasy/sci-fi. The recording is well done, read in the serious, cultured British voice. But as I neared the end, I purchased a hard copy for my daughter, and read the final two chapters with my eyes not my ears. It's a different experience to read hard copy rather than to listen, and in this case there were pluses to both. I catch more details with my eyes, but I thoroughly enjoyed the refined sound of the spoken words.

In either format, I recommend this to anyone who enjoyed "Miss Peregrine's Home for Peculiar Children" or "Mr. Penumbra's 24-Hour Bookstore," etc.

Me encantada! submitted by thartj on July 8, 2018, 3:47pm Seriously, Mr. Gaiman, take a bow. This was such a beautifully crafted book. I laughed. I cried. I held my breath in fear. Gaiman has perfectly given a child’s perspective, with all the misunderstandings, secrets, thought processes and magic so true to the voice of a seven year old. He beautifully describes terrifying monsters, but also monstrous realistic human behavior—the things that scare a child, things both of the imagination and of reality. I love a lot of books, but I love this one the most of any I’ve read in a very long time.

Great submitted by anacoluthon on July 12, 2018, 9:33am Neil Gaiman is a masterful author. I had the great privilege to see Neil Gaiman in Ann Arbor and hear him read from this book.

The Ocean At The End Of The Lane submitted by lstorc on August 6, 2018, 4:19am This was not what I was expecting. It exceeded those expectations by far. 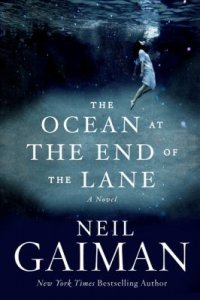