Guys and Dolls and Other Writings The Broadway stories. Romance in the roaring Forties ; A very honorable guy ; Madame La Gimp ; Dark Dolores ; Lillian ; Social error ; Blood pressure ; Butch minds the baby ; The hottest guy in the world ; The lily of St. Pierre ; The bloodhounds of Broadway ; "Gentlemen, the King!" ; The brain goes home ; The snatching of Bookie Bob ; Hold 'em, Yale! ; For a pal ; Broadway financier ; Little Miss Marker ; Dream Street Rose ; Tobias the terrible ; Dancing Dan's Christmas ; Earthquake ; The idyll of Miss Sarah Brown ; The old doll's house ; It comes up mud ; The brakeman's daughter ; What, no butler? ; Broadway complex ; The three wise guys ; The lemon drop kid ; Princess O'Hara ; A nice price ; Sense of humor ; Undertaker song ; Breach of promise ; A light in France -- The Turps. A call on the President -- Early fiction. The defense of Strikerville ; Two men named Collins -- Other fiction. Lou Louder ; On the dear departed ; Doc Brackett ; Jeremiah Zore -- Poems. A handy guy like Sande ; A Jew -- Trial reporting. Arnold Rothstein's final payoff ; Al Capone ; Morgan the mighty -- Occasional prose. Why me? ; Sweet dreams ; Passing the word along ; Your neighbor--the gambler ; Mr. "B" and his Stork Club -- Essay and annotations by Daniel R. Schwarz.
"Damon Runyon was many things: a westerner who fell in love with New York City, a quintessential newspaperman, an entertainer, but most of all, he was a storyteller. Through a broad range of genres, he wrote indelibly of gangsters and grifters, immigrants and itinerants, the pathetic and the powerful. And against the stark reality of the Depression, Runyon continued to capture the exciting, powerful New York City that he believed in, and soon America adopted his voice as its own. This collection presents the full range of Runyon's extraordinary talent, from his sports journalism to the Broadway tales for which he is chiefly remembered. It is the ultimate tribute to a writer celebrated for his broad-shouldered prose, colorful characters, and singular eye for detail, especially when it came to delivering his greatest character: the city of New York"--Page 4 of cover.

Bust Out Loud Hilarious submitted by Robbo1O on November 15, 2019, 7:05pm Damon Runyon is the funniest writer I have ever read. These tales, with offbeat characters, a stylized use of language and unexpected twists, are amazing. A priceless American humorist. 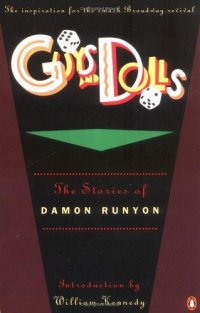